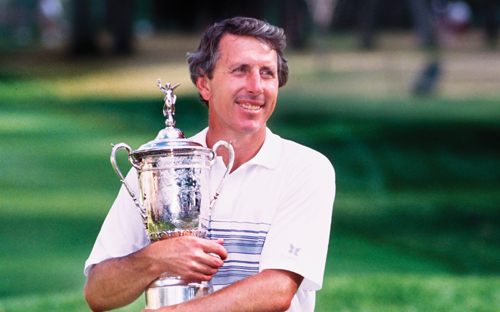 Not many elite-level professional golfers can truly say they graduated from the school of hard knocks.

We’re not talking metaphorical hard knocks — overcoming significant adversity to achieve something great. Plenty of tour pros have done that.

Hale Irwin graduated from that school.

Irwin was a starter at quarterback and cornerback for three years on the Boulder High School football team. He went on to become an All-Big Eight Conference defensive back twice at the University of Colorado.

At those positions and at those levels, he took and delivered many dizzyingly hard hits. And looking back on it, they made him that tough, hard-nosed, ultra-competitive athlete that excelled at the very top tier of golf — and at the most brutal of venues.

“I looked at every golf course as a football field,” said Irwin, now 74. “It was me or them. I say that somewhat jokingly because the thing I had more of than the other fellas was effort. Again, I point back to the football background. Look at me; I was a little guy even then. And I wasn’t terribly fast. I had good football speed but I didn’t have flat-out fast speed. So I had to read my keys, I had to be in position and I had to play technically better than the next guy. Then I had to play over my weight. I had to hit harder. All that effort is what I could take to the golf course. So when you got to the Winged Foots, you got to those hard courses, where other guys might tend to let up a little because they felt it was too hard, that was right up my alley.”

More than a half-century after Irwin hung up his football cleats for the final time, the fruits of his labor are there for all to see — a World Golf Hall of Fame career that included three U.S. Open victories, 20 PGA Tour wins overall and a record 45 triumphs on PGA Tour Champions since turning 50.

“It’s amazing what he’s done,” said Bernhard Langer, who is challenging Irwin’s career Champions victory total. “What a career Hale Irwin has had.”

Appropriately, the newly created Hale Irwin Medal, which will be presented for the first time on Nov. 23 at the Colorado Golf Hale Irwin Dinner at The Broadmoor Resort in Colorado Springs, recognizes outstanding Colorado golfers who “exhibit competitiveness, resiliency and a proven record of winning.”

Of course, that describes Irwin and his athletic achievements to a T. And it’s also fitting for this year’s first two recipients of the Hale Irwin Medal: Dale Douglass and Jennifer Kupcho, two of the top golfers Colorado has ever produced.

Irwin himself is the unrivaled king of that realm, compiling a record of golf achievements unmatched by anyone who has grown up in the Centennial State.

On this occasion, it’s certainly worth revisiting those achievements, as well as what’s made Irwin as successful as he’s been, including his formative years, as well as other aspects of his life that are less publicized but every bit as important in the big picture — his family, his philanthropic work and his desire to pass along life lessons he’s learned to future generations. And then there’s his golf course design work, which also adds to the legacy.