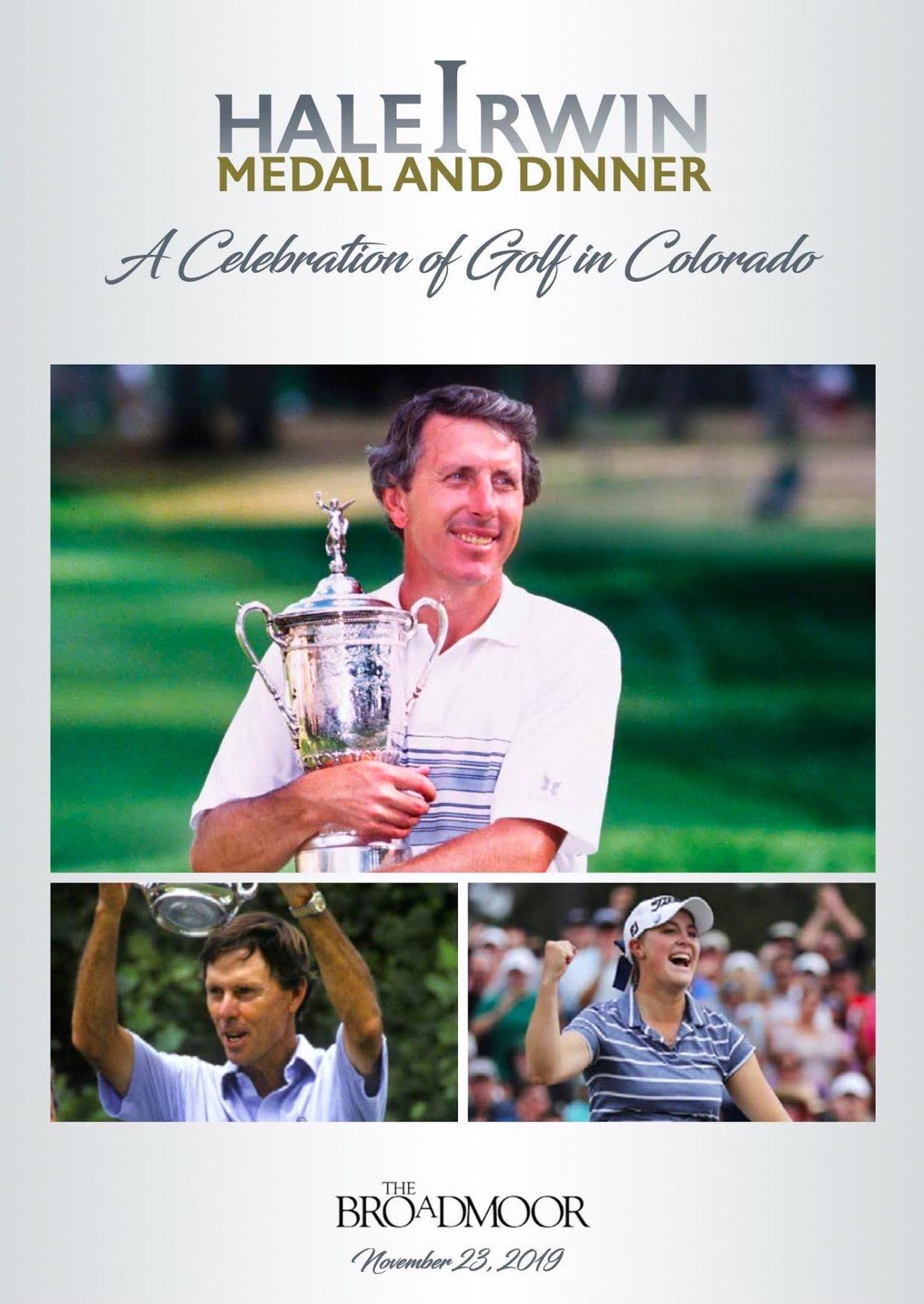 About 550 people expected to attend inaugural Hale Irwin Dinner and awarding of Irwin Medals to Douglass and Kupcho; site will be The Broadmoor, which hosted Century of Golf Gala in 2015

It was four years ago this month that one of the largest celebrations of golf in Colorado history — at least of the indoor variety — took place at The Broadmoor Resort in Colorado Springs.

About 1,250 people attended the Century of Golf Gala, including a who’s who of golf in the Centennial State — and beyond, most notably headliner Jack Nicklaus, who won both his first and last USGA championship in Colorado.

On Saturday — not coincidentally also at The Broadmoor — another big-time Colorado golf get-together will be held, with the inaugural Hale Irwin Medal and Dinner being celebrated this time around. It won’t be quite as big an affair, but with 550 people expected to attend, it will still certainly fall into the “large-scale” category. (For more information on the festivities — or to purchase tickets, CLICK HERE.)

Not surprisingly, quite a few people who attended the Century of Golf Gala will also be on hand Saturday — most notably Irwin himself. The three-time U.S. Open champion and World Golf Hall of Famer, who lived in Boulder during his high school and college days, was honored as Colorado’s “Male Player of the Century” at the 2015 Gala, and this time he’s the headliner, with his career being celebrated and the Hale Irwin Medal being awarded for the first time. Two of Colorado’s best players ever — Colorado Sports Hall of Famer Dale Douglass and 2019 Augusta National Women’s Amateur champion Jennifer Kupcho of Westminster — will receive the initial Medals.

(Douglass — the Fort Morgan High School and University of Colorado graduate who won three times on the PGA Tour and 11 times on PGA Tour Champions including the 1986 U.S. Senior Open — is scheduled to attend Saturday’s festivities. Kupcho won’t, though, as she’s competing in the lucrative season-ending CME Group Tour Championship in Naples, Fla., which will wrap up her abbreviated rookie season on the LPGA Tour.)

“It has been a lot of work, but a lot of fun” to organize the Irwin Dinner, awarding of the Medals and ancillary events, CGA executive director Ed Mate said earlier this week. “It’s been a blast. I’ve gotten to know Dale Douglass. I’ve gotten to spend a lot of time — via text and otherwise — with Jennifer Kupcho and her dad (Mike). I’ve gotten some really good chances to get to know Hale better. And most importantly, we’re going to get to honor all of them. Everything we set out to accomplish has really come together beautifully.”

Like the Century of Golf Gala, the Irwin festivities will bring together the top golf organizations in the state — the CGA, Colorado PGA, Junior Golf Alliance of Colorado, the Rocky Mountain Chapter of the Golf Course Superintendents Association of America, the Colorado Golf Hall of Fame and the Mile High Chapter of the Club Management Association of America — as well many of the golf leaders and top players in the state. Hence the dinner’s theme of “Community, Championships and Collaboration.”

This event “is important because 1) we’re honoring three great champion golfers, all of whom started here in Colorado,” Mate said. “This dinner is a chance to really shine the light of excellence at the national level and international level on three of our true greats. 2) community. It’s a gathering of the community. … I divide this into two things: We’re there to share this celebration, but we’re also there to gather to raise money for our future. I’ve always had this vision — the 2015 Gala certainly satisfied this, but on a more regular basis — of honoring our players of the year and raising money for a cause we all believe in. That’s one of the other elements of the dinner I’m really excited about. It’s really the entire golf community celebrating together.

“And we’ve all aspired at one point to play the best golf we could play, and when you see those who have really done that and achieved their full potential — or a lot more of their potential than we have — I think it’s an inspiring.”

As Mate alluded, the Irwin Medal and Dinner event will benefit a good cause. The net proceeds from the festivities will support the Colorado Golf Foundation, with a portion designated for the 2020 U.S. Girls’ Junior Championship, which will be hosted by the Junior Golf Alliance of Colorado at Eisenhower Golf Club at the Air Force Academy.

Saturday’s dinner at The Broadmoor will be highlighted by a fireside chat with Irwin conducted by longtime Colorado broadcast standout Tom Green, the emcee for the evening. They’ll discuss Irwin’s life and career — everything from his childhood in Baxter Springs, Kan., to his illustrious 50-plus-year career on the PGA Tour and PGA Tour Champions.

Separate medal presentations to Douglass and Kupcho (the latter in absentia) will also be foundational parts of the program. Kupcho, the former No. 1-ranked amateur in the world who has three top-five finishes in her rookie season on the LPGA Tour, will address the attendees via video, ideally from the site of the Tour Championship in Florida.

Other parts of the Saturday program include recognizing the players of the year from the Junior Golf Alliance of Colorado, the Colorado PGA and the CGA, along with 2019 Colorado Golf Hall of Fame inductee Lauren Howe, who won an event on the LPGA Tour in the 1980s. Also being saluted will be the champions and low amateurs from the 2019 CoBank Colorado Open, Colorado Women’s Open and Colorado Senior Open. A tribute also will be paid to club champions from throughout Colorado.

The dinner program will feature live music, with singers Jalyn Webb and Charis Smith, as well as pianist Jeffrey Zhou. In a nice bit of symmetry, Zhou has been part of the Hale Irwin Player Program at CommonGround.

Beyond the dinner/medal program, there are some ancillary activities planned for The Broadmoor this weekend. The first is a Friday night screening of the movie “Loopers: The Caddie’s Long Walk”, which made its debut earlier this year. The documentary, narrated by Bill Murray of “Caddyshack” fame, features plenty of Coloradans who mainly make appearances in the latter portion of the movie: George and Duffy Solich, who lent their name and support to the Solich Caddie & Leadership Acacemy, which debuted at CGA-owned CommonGround Golf Course in Aurora; National Sportswriters and Sportscasters Hall of Famer Rick Reilly, who grew up in Boulder; Mate; former CU Evans Scholars Zoe Welz and Melyzjah Smith (Smith was also part for the Solich Caddie & Leadership Academy, which is also featured). And “Loopers” executive producer Jim Packer is a CU graduate.

Also, sponsors of the Irwin Dinner will play 10 holes of golf at The Broadmoor’s West Course on Saturday — assuming the weather cooperates, of course.