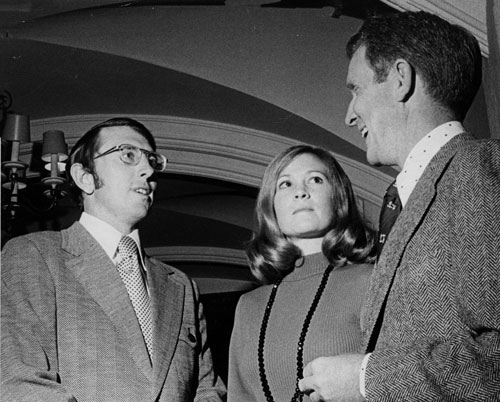 Before embarking on his professional career — which has now lasted more than a half-century — Irwin had to finish up school and get his marketing degree.

And, not surprisingly, given that it was 1968, his route to the PGA Tour looked a lot different from how top amateurs make it these days.

“I graduated from CU in January of 1968. Eddie (Crowder, CU’s football coach) extended my scholarship if I would help coach the freshmen team, which I did. After graduation I sent my application into the PGA of America and turned pro in January right after graduation.

“I had to go through the qualifier, which was in April, down at PGA National (in Palm Beach Gardens, Fla.). You had to show a bank statement or a sponsor’s statement or something — of financial means of at least $20,000 for the year for financial support so you’d be less likely to be bouncing any checks along the way because they’d been having some problems with that. (Agent) Jack Mills, (CU golf coach pictured) Les Fowler, Eddie Crowder and others put me in touch with Jack Vickers to be a potential sponsor, and he agreed, and he brought in a gentleman by the name of Lou Diamond, who at that time was president of Frontier Airlines. They were both kicking in $10,000 because my mom and dad didn’t have that kind of money and I certainly didn’t. That was my sponsor.

“I went down there two to three weeks ahead of time to try to get the snow off of me and learn to play golf and do some practicing. Eddie Crowder put me in touch with a couple of people down there with whom I stayed. I really pretty much did it on my own. Along comes the qualifier and we had 18 holes on Thursday, 18 on Friday, 36 on Saturday, 18 Monday, 18 Tuesday and 36 Wednesday.”

But that grueling schedule played right into Irwin’s wheelhouse.

“It was quite a grind, but I didn’t mind because I was in great shape just coming out of football. The conditioning, I was much better than everyone else,” he said. “Did I have more talent than anybody else? Well, no. They gave out 15 cards for maybe 120 applicants or something like that. I think I finished fifth or somewhere in there. All that did was give you the right to go to the Monday qualifying at each site. If you made the cut you were automatically into the next week’s tournament without having to qualify on Monday.

“The first event after qualifying was in Memphis in May of 1968. I made the cut, and they cut to 70 and ties but they only paid 50 and ties. So I made the cut but finished outside of the top 50 (65th). I’m on such a tight budget. $20,000 was all I had, and that was going to have to last me through a marriage in September and … Long story short, I played my first tournament and made the cut but didn’t make any money. I missed the cut in Atlanta the next week, then came back to Boulder for a couple of weeks, got a new car then drove from Boulder to Toronto and started that way.”

Irwin missed the cut in Toronto, but had an interesting experience along the way.

“A guy with whom I qualified — Mac McLendon from Birmingham, Ala. — and I were playing a practice round. We got up to the first tee one day and lo and behold there’s Arnold Palmer,” Irwin recalled. “Arnie asks if we want to play along with him and we said sure. He said, ‘I’ll tell you what: I’ll play you two best-ball.’ Here’s Arnold Palmer going to play two rookies. Now the competitiveness in me kicks in and I’m thinking, ‘There’s no way he’s going to beat us.’ We ended up beating him. We were 1 up playing the last hole and I hit a long iron about a foot from the hole on 18.

“And for all the years that I knew Arnie, he never paid me the $10 he owed me. I kept reminding him and he’d just grin and walk away.”

The next week, in Cleveland in his fourth tour event, Irwin made his first official check on the PGA Tour. “It was not very much money, just enough to maybe come close to paying my expenses,” he noted.

Early in his career, Irwin made it a point to learn from PGA Tour veterans.

“Particularly when I got on the tour, I didn’t try to make a pest of myself, but I listened a lot,” he said. “I listened to what Gardner Dickinson and Jack Nicklaus might be talking about. I listened to what Dow Finsterwald and Arnold Palmer might be talking about. I sought out people I knew if I had questions. Mostly I watched. It was more of a self-learning, keep aware, never feel like you know the answers. There were a lot of things I did on my own but my eyes were this big.

“Dale Douglass was the greatest thing that ever happened to me. He helped me out through those years — not necessarily with the golf swing, but how to live on the tour, where to stay, where to eat, because you didn’t have all this advance stuff in those days.”

It was just months into his PGA Tour career that Hale and girlfriend Sally Stahlhuth, who met at CU, were married. The wedding took place in September of 1968, meaning that they recently celebrated their 51st anniversary.