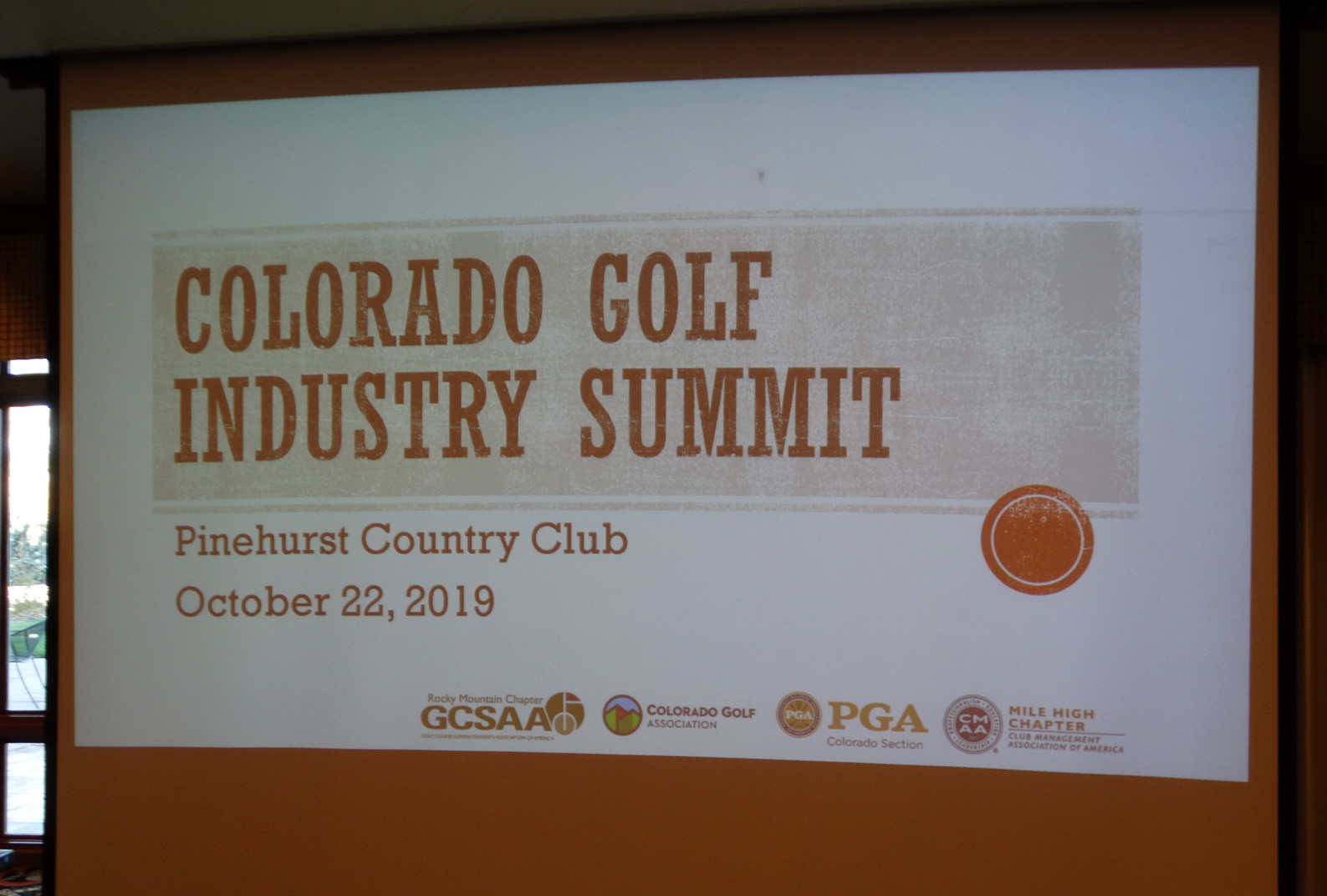 Updated Colorado golf Environmental & Economic Impact Study in the works; 2020 the ‘Year of the Woman’ in Colorado golf; Colorado will be a pilot state for ’Doubles Golf’

The Colorado Golf Industry Summit — like its predecessor, the G4 Summit — attempts to be a forward-looking event regarding issues facing golf. And so it was for Tuesday’s Summit at Pinehurst Country Club in south Denver.

But this edition not only featured informational presentations of various sorts — how the game of golf is trending, potential issues coming before state lawmakers that may affect golf, key topics regarding the business side of golf, etc. — but some newsworthy tidbits.

Here are a few that came out of the Summit, which drew about 130 people to Pinehurst:

“It’s long overdue that we update it,” CGA executive Ed Mate said after Tuesday’s Summit. “We can’t advocate if we don’t have good data. There’s so much misinformation out there, so it’s important to have the facts. The facts show — we know this — that golf is a very environmentally prudent industry that contributes significant dollars to the state’s economy and provides a ton of employment opportunity. On an environmental level, golf courses serves as these filters for carbon emission or carbon offsets. It’s very easy — in today’s world more than ever — to sort of use sound bites to paint people with broad strokes and say golf is an elitist sport, which is not true. But the data has to be current.

“It will be a valid, third-party study that we can hang our hat on.”

The new impact study could be particularly valuable as Colorado Golf Coalition lobbyist Jennifer Cassell converses with lawmakers at the state capitol regarding the benefits of the golf industry.

“If Jennifer Cassell, who has done a phenomenal job for us as a lobbyist, is working with real current data as opposed to 20-year-old data, (lawmakers) will have a tendency to listen more,” Colorado PGA executive director Eddie Ainsworth noted. “It’s a big chunk of money — a big investment — but we need to do it. And going forward, it will be updated more regularly.”

Cassell likewise sees plenty of value in an updated study, noting “If we are not at the table, we are the menu.”

— 2020 the Year of the Woman in Golf: With the Junior Golf Alliance of Colorado — a joint effort of the CGA and the Colorado PGA — serving as host organization for the 2020 U.S. Girls’ Junior Championship that will be held at Eisenhower Golf Club at the Air Force Academy in July, the Colorado Golf Coalition has designated 2020 the “Year of the Woman” in Colorado golf.

Given that it’s a female championship and that some major related events are female-oriented — such as the Women’s Leadership Summit — Ainsworth thought it’s a good way to build on the event’s foundation.

“It’s really to highlight the industry and the women in it,” Ainsworth said. “And when you look at Colorado, we have some pretty phenomenal women. That’s kind of how that came about.”

Said Mate: “The national championship we’re hosting is only going to affect a small number, but the ripple effect is what we’re really hoping to capture — how that plays out in our industry as a whole.”

— Doubles Golf: “Doubles Golf”, a trademarked rebranding of the two-player scramble format, will soon become a recognized and formalized competition on a state and national level, and the Colorado PGA will be one of five or six PGA of America Sections that will pilot the program starting in January 2020, according to Ainsworth. Local, state and national championships are on the agenda.

“Jack Nicklaus is involved and he’s excited about it,” Ainsworth said. “I’m big on state ownership. That’s why I’m excited about it. We’re going to own it here in Colorado. It’s definitely going to be led by the Colorado PGA, but we want everybody to participate and figure out a way that this moves the needle for everybody.

“We’re working hard to get (the groundwork) done in the next 30 days.”

Mate likes the concept in large part because it’s a variation of what he’s played with his wife, Eva.

“I personally think it’s the best idea I’ve heard of as a way to grow golf in all my years in golf,” Mate said. “And I say that because I’ve seen it. It’s just an awesome format. … When you get Jack Nicklaus’ name on something, you want to seize that opportunity.”

— Update on Welcome2Golf: Starting this year, the Welcome2Golf initiative has used Denver as a pilot city for an effort get interested non-golfers into the game through a concerted marketing “activation campaign”.

Thirteen golf facilities in the Denver metro area were involved as Welcome2Golf “welcome centers” in 2019.

Over the course of June and July, Welcome2Golf marketing created an estimated 8.3 million impressions over various media and outreach platforms in the Denver market.

“We think that it got people to the golf courses,” said Joe Beditz, CEO of the National Golf Foundation, which is behind the Welcome2Golf initiative. “… We did exit interviews with all the operators at the Welcome2Golf centers. They said ‘we felt it produced more business. Our classes were full. We didn’t cancel any classes.’ They said you’ve brought a lot of attention to us. There’s more of a welcoming culture at our facilities (and) we’re more sensitive to people who come here who have never played before. And of course we had an indirect impact that we can’t measure. When we advertised in the whole market, people didn’t just go to the 13 local centers. There’s another 60-plus facilities in the market, and I’m sure some of the people ended up at those facilities, saying, ‘I’m interested in playing golf.’”

Earlier this year, Beiditz said he was hoping to “activate” somewhere between 5,000 and 7,000 latent golfers in the Denver market in 2019.

The next step in the Welcome2Golf pilot program in Denver will be to see the effect on a course-by-course basis, devoting marketing efforts to a much smaller area around specific facilities.

— Colorado Golf Coalition Happenings: Leading organizations in the golf industry in Colorado — including the CGA, Colorado PGA, Rocky Mountain Chapter of the Golf Course Superintendents Association of America and the Mile High Chapter of the Club Management Association of America — have long teamed up for the betterment of golf in Colorado. These days, that takes the form of the Colorado Golf Coalition organizing and funding the Golf Industry Summit and the Golf Day at the Capitol, retaining a lobbyist (Cassell) who works on behalf of the Golf Coalition at the state capitol, and putting the wheels in motion for a new Environmental & Economic Impact Study in Colorado.

Though the Colorado Golf Coalition is an informal organization at present, Ainsworth would like to formalize the entity, which has invested almost $100,000 into the aforementioned causes in 2019. And adding the Colorado Golf Hall of Fame to the Coalition fold is an idea that’s being considered as well.

As for the Colorado Golf Industry Summit, the plan is to hold the event annually for the foreseeable future.

“I think this is one of the best ones we’ve had,” Mate said of Tuesday’s Summit.

“This emphasizes the importance of all of us coming together,” Ainsworth added.