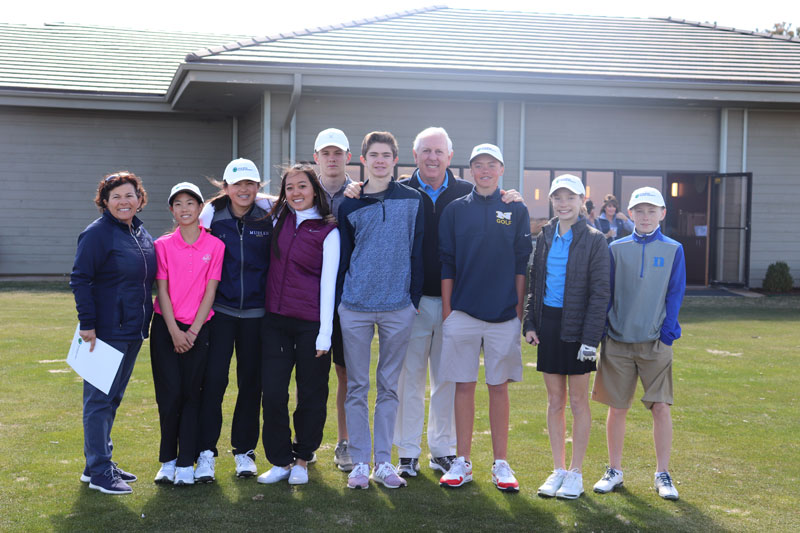 While Irwin was long known as one of the fiercest competitors in golf, there are other aspects of his life that reveal a caring, compassionate side.

After Irwin’s third U.S. Open victory, Coke Tolle, who taught Irwin part-time in first grade at Washington Elementary School in Baxter Springs, certainly attested as much. Tolle told a story about how Irwin, as a child, befriended a deaf classmate, Gregg Price.

“(Price) sat in front of Hale in the first grade and Hale would open pages for him and point to where we were,” Tolle said. “And he’d take him out on the playground. He took care of him completely.

“No one told Hale he had to do this, but he was so mature, so caring. I’ve never seen a boy like that, and I’ve seen a lot of kids.”

“(Baxter Springs) was a warm community where everyone helped everyone. I tried to help him because he was my friend.”

Said Steve about his dad: “There’s an element to him that still is that Baxter Springs boy of humbleness and wanting to make sure that things are done right the first time, and that people who put their trust in you to do work for them, make sure you give them the best effort you possibly can.”

These days, even at age 74, Irwin places a high priority on helping kids. He’s lent his name and support to the Hale Irwin Player Program at CommonGround Golf Course, which is owned and operated by the CGA, and to the AJGA Hale Irwin Colorado Junior that annually draws many of the best young golfers from the state and region. And in recent years, he’s also conducted several Colorado-based clinics for juniors as part of the U.S. Senior Open at The Broadmoor, for The First Tee at Green Valley Ranch and for the AJGA event at CommonGround and Walnut Creek.

“There’s so much to be learned out there in the world and I’ve learned an awful lot through golf,” Irwin said. “Some of the people I’ve been around have been just outstanding people. If I can take just a germ of that and give it to kids, and it seeds itself and it grows, they’re far better off.

“And what’s not to love about being out there with these kids? If you don’t love that, there’s something wrong with you. I love it.”

More generally speaking, in Colorado and elsewhere, Irwin’s main two emphases of his philanthropic endeavors are kids and the military.  He founded a charity golf tournament in St. Louis in which he participated for 25 years — the Hale Irwin St. Louis Children’s Hospital Golf Benefit. That fundraising eventually resulted in the building of the Hale Irwin Center for Pediatric Hematology/Oncology at St. Louis Children’s Hospital, which was dedicated in 1995. Irwin  and wife Sally lived in St. Louis for almost 30 years.

On the military end, Irwin has done a golf event that involves military members between overseas deployments, and the Folds of Honor charity is near and dear to his heart.

Earlier this year, Irwin became the 22nd recipient of the Payne Stewart Award, which goes to a professional golfer who best exemplifies Stewart’s values of character, charity and sportsmanship.

The Stewart Award winners are given $300,000 to direct to charities of their choice. Irwin said he and wife Sally are supporting the following with the money:

— Folds of Honor out of Tulsa, Okla.

— TGen in Arizona, which among other things, attempts to figure out genetically who’s susceptible to cancers.

In 2009, Irwin received Ambassador of Golf Award, which is presented annually to a person who has fostered the ideals of the game on an international level and whose concern for others extends beyond the golf course.

Three years later, Irwin returned to Colorado to receive the Nicholson Award, given for a lifetime of commitment and dedication to the game of golf.

And last year, Irwin was the honoree at Jack Nicklaus’ Memorial tournament.

“Jack and (wife) Barbara (Nicklaus) have been very good friends with Sally and I for a long, long time but (especially) since the Memorial last year,” Irwin said. “We went to Wimbledon with Jack and Barbara this year, and we stayed in Europe with them. We’ve had a really good time with them. They do a lot of really good work.”