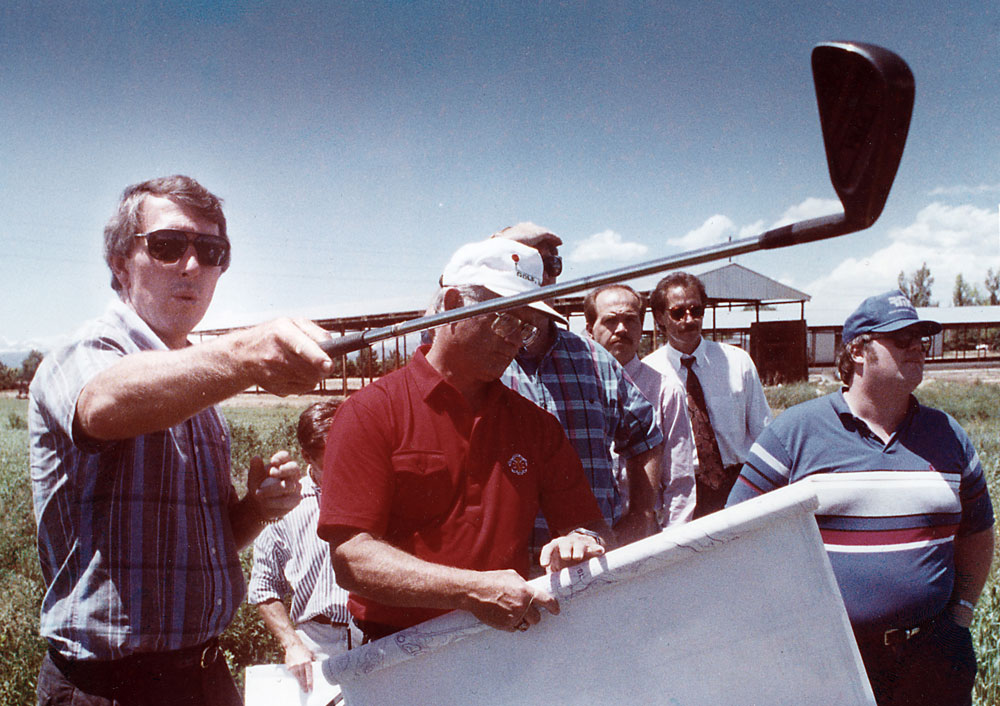 By the time Irwin was 40 years old, in 1985, he had won 17 times on the PGA Tour. And another aspect of his professional career began to take shape — as a golf course designer.

“I started my golf course design company when I was 40 years old because I kept hearing from everybody, ‘You can’t play once you’re past 40,'” he said.

Of course, at least in Irwin’s case, “everybody” turned out to be wrong as Irwin would win three more times on the PGA Tour, including a third U.S. Open, plus a record 45 times on PGA Tour Champions.

In any case, for much of the late 20th century and the beginning of the 21st, golf course construction was going fast and furious. In Colorado, for instance, there were even some individual years when 10-plus courses opened.

Irwin estimates that he’s been involved in two dozen to three dozen course design projects or renovations now in play — as the designer of record or assisting — over his lifetime.

In Colorado, the list includes Indian Peaks in Lafayette (with Dick Phelps), Cordillera Mountain Course in Edwards; University of Denver Golf Club at Highlands Ranch; and the Glacier Club Mountain Course in Durango (with Todd Schoeder). Irwin has also been serving as a consultant for Schoeder on the new course at City Park in Denver.

And there have been a number of others projects that have gotten derailed along the way.

“Either the money goes away or the permits don’t come in. Any number of things can shoot down a project,” Irwin said.

The work, of course, has slowed down considerably to a near halt in the U.S. since the Great Recession of a decade ago.

“I don’t pursue it as aggressively as I once did,” Irwin said. “Todd Schoeder and I, we combine our efforts to try to come up with some different projects. I don’t have a staff of people now like I once did. My brother-in-law and I were in business. We kind of ratcheted all that back because it was too cost-ineffective because once the market went out, the architects that were out there that had graduated from Nicklaus or Palmer or Jones or whomever, they were hanging their own shingle, and there’s so many architects out there now that will do the work for substantially less than what I will. It just becomes a numbers game after a while.

“I still want to do it. I still enjoy the heck out of it. I find it very fulfilling and frankly I think we’re pretty good at it. But it’s not something I want to chase over to the Far East, for instance. I don’t have any desire to run halfway around the world to chase down a possible project.”

All in all, given the many achievements Irwin has packed into his life, it’s little wonder why the CGA has honored Colorado’s favorite golf son by naming the Irwin Medal for him.

“There’s no better player to ever come out of the state of Colorado than Hale Irwin. You can’t even argue (that),” CGA executive director Ed Mate said.

“When Hale agreed to lend his name to the AJGA event, it sort of dawned on me that he’s entering a new phase of his life. I just saw how much he enjoyed interacting with the kids. It just dawned on me that this guy is the greatest player ever (from Colorado). There’s nobody that’s going to be like Hale Irwin. So what can we do during this period of his life where he’s in the giving-back mode to honor that — and not just take it for granted? When the history books are written and they look back on the history of golf in Colorado, and the next generation looks at Hale Irwin, let’s honor that and cement it.”