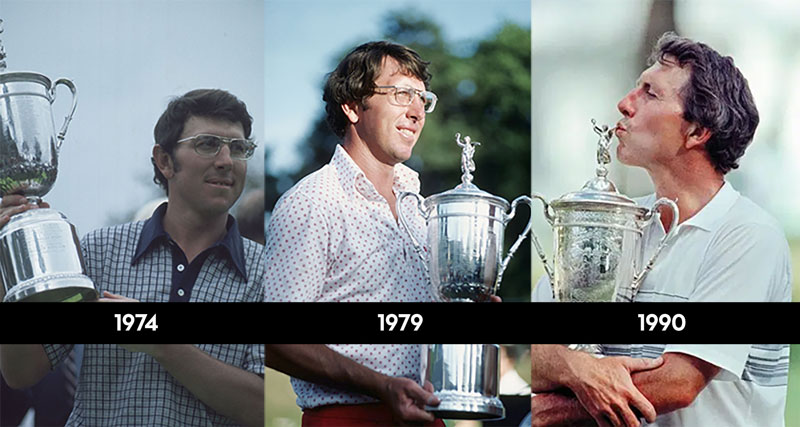 Irwin’s first PGA Tour victory not at the Heritage Classic came at the 1974 U.S. Open. Irwin’s three triumphs in the U.S. Open would become hallmarks of his career, demonstrating how he was at his competitive best when conditions were at their toughest. Indeed, in 1974 writer Dan Jenkins called Harbour Town, site of Irwin’s first two PGA Tour wins, “one of the meanest courses around.” And Muirfield Village, where he won the Memorial twice and finished second in a playoff twice, is certainly no pushover.

Here are Irwin’s most vivid recollections of his three U.S. Open victories:

Irwin’s winning total of 7 over par remains the highest total, relative to par, for a U.S. Open winner since 1963. Sports writer Dick Schaap would go on to write a book about the tournament called “The Massacre at Winged Foot”, and there was plenty of talk that week and beyond that the USGA had set up the course particularly difficult in the wake of Johnny Miller shooting a record 63 in the final round of the U.S. Open the year before.

“Everybody was telling me it was my fault,” Miller once said. “It was like a backhanded compliment. The USGA denied it, but years later it started leaking out that it was in response to what I did at Oakmont (in 1973). Oakmont was supposed to be the hardest course in America.”

At Winged Foot, there was brutally deep rough — Miller said it “varied from six to a legitimate 10 inches” — and wicked-fast greens.

Competitor Jim Colbert once called Winged Foot for the 1974 U.S. Open “probably the hardest course of all time.”

During that U.S. Open week, Sandy Tatum, chairman of the USGA’s competition committee, famously said, “We’re not trying to humiliate the best players in the world. We’re simply trying to identify who they are.”

Says Irwin now: “It really was very difficult. To overcome all the difficult things that Winged Foot threw up at us during that week and to ultimately win was very satisfying.”

Irwin posted rounds of 73-70-71-73 — never carding a sub-par round for the week, but still prevailing by two strokes over Forrest Fezler. Also placing in the top 10 that week were Arnold Palmer and Tom Watson (fifth place), Gary Player and Tom Kite (eighth) and Jack Nicklaus (10th).

By 1979 Irwin was clearly one of the top players in the world. He’d won 10 times on the PGA Tour so far in the 1970s and was a regular contender at major championships. For instance, he finished in the top five at the Masters every year from 1974 through ’77.

This time at the U.S. Open, the set-up wasn’t quite so massacre-esque, but Inverness was certainly no pushover as Irwin ended up even-par for the week.

“In ’79 at Inverness, it was a much different golf course,” he said. “I had my family with me for the first time at an Open win. I remember a bad first round (74) and telling myself I’ve really got to play well the second round to make the cut, which I did (with a 68). I must have played a really good third round (a 67) because I went from not so good on Thursday to a (three)-shot lead going into Sunday.”

Irwin eventually built that lead to six going into the final nine holes.

“Ultimately it dropped back to five with two holes to play,” he said. “And I made an almost critical mistake in congratulating myself for winning another Open. I remember that on the 17th tee, then I went double bogey, bogey. I learned a lesson there that you never quit even with a big lead because you’ve got to finish it off.”

In the end, despite a final-round 75, Irwin prevailed by two strokes over Player and Jerry Pate. Likewise in the top 10 were Tom Weiskopf (fourth) and Nicklaus (ninth).

Irwin thus became the 14th player to win the U.S. Open more than once.

1990 at Medinah Country Club in Medinah, Ill., a suburb of Chicago.﻿

By the U.S. Open in 1990, Irwin was in the midst of a long victory drought, having not won on the PGA Tour in over five years. His U.S. Open exemption from his 1979 victory had run its course, but the USGA gave him a special exemption into the field in ’90.

And Irwin didn’t disappoint. It took 91 holes — 72 in regulation, a Monday playoff, then sudden death — but he chalked up his third U.S. Open victory, becoming just the fifth player to reach that milestone. (Tiger Woods would later become the sixth.)

“The last one at Medinah was surreal in the sense that I had been invited by the USGA, and I didn’t want to make their pick look bad. I wanted to have a good week,” Irwin said. “At 45 years old, you’re supposed to be washed up.

“The last day, Billy Ray Brown, who was one of the co-leaders, came to me as I was going to the first tee and (said) ‘Do you have any advice for me?’ I said, ‘You’re playing well, play your game. It’s critical that you don’t beat yourself. Play shots that you feel comfortable playing. In other words, just play your game.’ And I thought, ‘That’s pretty good advice. Why don’t you try that?’

“I was paired with Greg Norman and Greg birdied the par-5 10th hole, and I thought, ‘Gosh, he makes a couple more birdies and he might have a chance.’

Of course, Irwin’s lap around the 18th green, high-fiving fans along the way, is an indelible memory. That was “maybe a bit uncharacteristic but there was so much happening and when that putt went in, knowing how much I put into it, hearing the roar from the gallery just energized me.”

But Mike Donald would end up tied with him at 8 under par after 72 holes. That, under the rules in place at the time, forced an 18-hole playoff on Monday.

“Between (wife) Sally and I, we slept about five minutes that night. The adrenaline high I had on Sunday (made it) really hard the next day to come back. The good part was that I had quite a bit of experience. As good a player as Mike was, he didn’t have the experience. I fell back on that advice I gave to Billy Ray. I did get the lead early (leading by one after eight holes) but Mike played very steadily. He went to a fairway medal and just kept hitting the ball in the middle of the fairway, and I started making mistakes. Before I knew it I was two shots down with three holes to play and it looks very much like he’s going to be the winner.

“I hit a really good drive on 16 and a tremendous 2-iron and made one of those right-to-left putts that breaks about a foot from about 6 feet. Then he bogeyed the last hole and we set off on our first sudden-death playoff hole and I birdied that one” from 10 feet.

At 45 years old, Irwin became the oldest U.S. Open champion — a distinction he still holds. He had won after starting the final round in a tie for 20th place, but forced the playoff with a 67 on Sunday. Joining him in the top 10 at the 1990 U.S. Open were Nick Faldo (third), Norman (fifth), fellow former CU golfer Steve Jones (eighth) and Colorado Golf Hall of Famer Craig Stadler (eighth).

“As I’m sitting here in my chair talking to you I’ve got a painting up here on the wall that shows the tee shot on the 91st hole,” Irwin said. “It really brings back a lot of memories of ‘you just hang in there, keep at it, keep at it, keep at it.’ I hearken back to what happened to me at Inverness in 1979 when I congratulated myself too early. I told myself don’t congratulate yourself ever. And I remember standing on that tee, thinking this shot is the most important shot you’ve hit today, and I put it in the fairway. Then the next shot is the most important shot. You keep that mindset. And lo and behold, there’s the winner.”