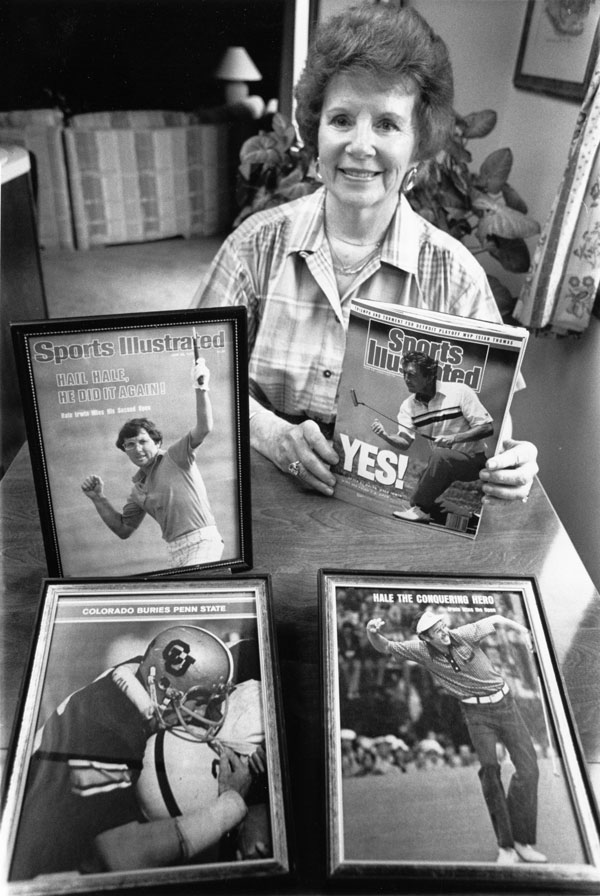 Multiple generations of Irwins have been in Hale’s corner during a career that’s lasted more than a half-century. That includes dad Hale Sr. and mom Mame, who lived in Colorado from the time Hale Jr. was 14 until they passed away; wife Sally and his younger brother by four years, Phil, who also played football at CU; daughter Becky, who recently moved from St. Louis to Arizona; son Steve, a longtime Colorado resident; and four grandchildren — Becky’s two sons and Steve and wife Jessi’s two daughters.

Irwin can trace this strong foundation back to his upbringing.

“The parents I had were very, very loving,” he said. “They were part of that great generation that had gone through the Depression, they had gone through two (World) Wars. There was nothing that wasn’t downright basic and good with those people, and that’s where I think the effort that was instilled in me came from — my mom and dad. They didn’t have anything, but they made something out of their lives. They made things work.”

Irwin is quite the family man, according to those who know him best.

“People don’t see him behind doors with the grandkids — in the swimming pool and playing on the beach with them and stuff like that,” son Steve said. “He’s a big goofball. Papa is loved dearly by his grandkids. He’s probably one of the best storytellers you’ll ever hear. He could have written children’s books for sure. He’s fantastic at it.”

Irwin met Sally while both were students at CU. They married in September 1968, then lived primarily with Sally’s parents in the St. Louis area for the next 3 1/2 years — when they weren’t out on the Tour, that is. When Sally became pregnant with Becky in 1971, the Irwins settled in St. Louis, and they would remain there for the majority of Hale’s career. Irwin cited St. Louis’ central location as one of the primary reasons he and Sally chose that area as home.

For the first 19 years of the PNC Father/Son tournament — one of golf’s biggest family affairs — Hale and Steve teamed up and competed on national TV with some of the other top names in the game. They claimed the title in 2003 and have been runner-up three times.

Like Hale, Steve played his college golf at CU. He went on to be named the CGA’s Player of the Year in 2004 and has qualified for one U.S. Open (2011) and three U.S. Amateurs. In recent years, Steve served on the CGA’s volunteer board of directors.

The bottom line is, family and friends have been an integral part of Hale Irwin’s life — and his success — from day 1.

“From where I sit now, when I look back on my career and my life, the thing that has been the most steadfast and near and dear to my heart has been my family and my friends,” he said. “I’ve been very successful with the game of golf — to that I’ll never be able to repay — but I couldn’t have done that without the support of my family and friends.

“At some point in your life you have to take stock in what is really the primary thing. I started doing that several years ago. Not only had the interest in playing diminished a bit, but age starts catching up with you too, I just felt like there’s things before I move on to the next golf course — whether it’s up there or down there — some things I want to concentrate on as far as passing it on or handing it down and trying to influence my grandchildren in a way that my parents and friends influenced me.

“The world is going so many different directions right now, you can’t get your arms around all the hostile things, all the bad things, and I’m trying to point out good things. That’s my focus right now — trying to take my family and do the best I can with it while I can and they venture out into the world themselves.”