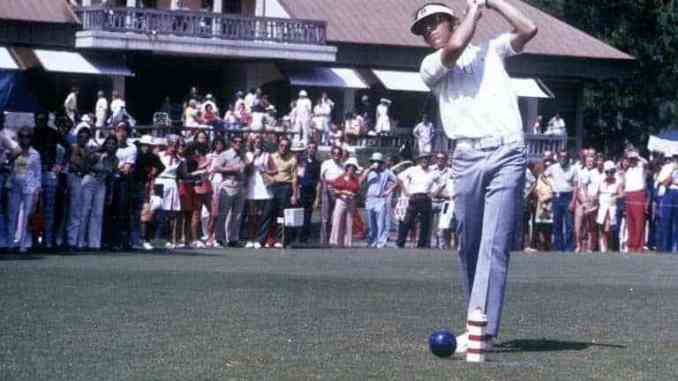 Not surprisingly, when Irwin points to the pivotal accomplishments in his career, his first PGA Tour victory, in late 1971 at the Sea Pines Heritage Classic at Hilton Head Island, S.C., is certainly part of the conversation.

“It was over Thanksgiving,” Irwin said. “Sally was at home getting ready to have our first child, Becky, so she wasn’t there. The golf course we had first played in 1969 and it was really hard because it was literally carved out of swamp, trees and drainage ditches. None of the homes were built. It was hard. I remember playing in it, thinking, ‘I don’t know if I’ll ever play this course again.’ I did OK. The next year I came back and it was a little more developed. It was still a very difficult course, but it suited my game because you had to be accurate off the tee and you had to play really good iron shots because it was really tight — a positional golf course.

“Oddly enough, I’m playing in the last group with Mac McLendon again. It was kind of a gray day and I remember on the last hole telling myself, ‘Keep your head on the ball. Stay with the swing.’ I did it, then I looked up and I couldn’t see the ball. I went into a millisecond panic. I thought for sure I missed it because I couldn’t see it.

“Then I hit a 5-iron on the green and was probably 25 feet from the hole. I putted up about a foot from the hole. When I hit that putt it felt like my putter had become bubble gum — like the face of the putter stuck to the ball. I remember absolutely feeling like I had to shake the ball off the putter head to get it to the hole.”

But Irwin did prevail, shooting weekend rounds of 68-70 at Harbour Town Golf Links to overcome Bob Lunn by a stroke. The victory was worth $22,000 and he went on to finish 12th on the 1971 PGA Tour money list.

“I spent the night there at Harbour Town (after the win) and drove to the airport the next day feeling very proud that I had accomplished something that I had hoped to do long ago,” Irwin said. “In 1970 I had lost in a playoff to Billy Casper in L.A. As a matter of fact, (fellow Colorado Golf Hall of Famer) M.J. Mastalir was caddying for me. I was two ahead with four holes to play. I made a bogey and I played the last hole loosely.

“I did feel good (facetiously) in that I helped Billy Casper in career winnings to go over $1 million that week. Billy birdied the first playoff hole. I had second place and a huge check for me and the confidence was really there, but it takes a while to take that and make it work. The process I could see was getting better every week, every month and each year and it just sort of culminated there at Harbour Town.”

The tour stop at Harbour Town proved to play a large role in Irwin’s career as he won three times there, marking the first, second and final PGA Tour victories of his career.