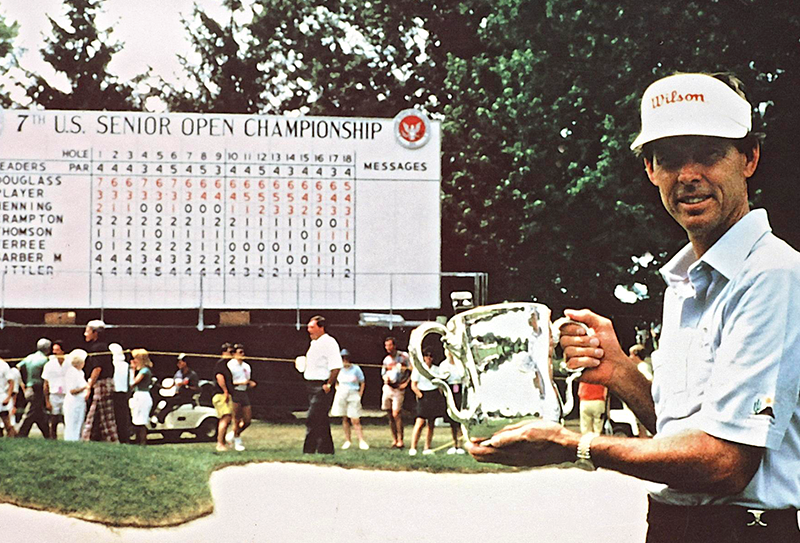 A simple Google search, leaving off the last “S” in his name and including the word “golf”, quickly confirms the oft-made mistake.

But there’s no mistaking the impact Douglass has made on Colorado golf, and golf in general. The fact that he — along with Jennifer Kupcho — are the first recipients of the Hale Irwin Medals that will be awarded on Nov. 23 at the Hale Irwin Dinner at The Broadmoor Resort in Colorado Springs, attests to that.

“Anytime you receive any kind of recognition, it’s pretty special,” Douglass said recently. “To have somebody of Hale’s caliber, his record in golf and what he’s meant to golf … just to get me involved in that is also very special.”

Douglass was arguably the first golfer who grew up in Colorado to have considerable success on the PGA Tour level. And at age 83, he’s about nine years older than Irwin, a fellow former University of Colorado golfer. Given their mutual connections to Colorado and to CU, Douglass helped ease Irwin’s transition from the amateur ranks to big-time tour golf.

“When I started on the tour it was sort of a natural attraction to lean on Dale,” Irwin said in a recent interview. “It shows you how far the tour has come, but back then there was no advance housing and nothing done in terms of hospitality like there is now. You drove yourself to the next tournament, you found a taxi or rented a car or your drove your own car. It was more word of mouth where to stay, what roads to take, where was the golf course once you got there.

“I found out very soon that it wasn’t just a matter of hitting a golf ball — that seemed to be the easier part. The harder part was how do you live, how do you make your way from point A to point B and once you get to B how do you live before you get to point C. That’s what Dale and (his late wife) Joyce were so good at with us. And to this day we’re very, very close.”

Indeed, after Irwin won the individual title at the NCAA tournament in 1967, Douglass asked him to play as partners at the U.S. Pro-Amateur.

“We played together and we won,” Irwin said. “That really started a close friendship between kindred spirits, being from Colorado and all that.”

Before Irwin notched his first PGA Tour victory in 1971, Douglass had chalked up all three of his wins on that tour. The three — the Azalea Open Invitational and the Kemper Open in 1969 and the Phoenix Open Invitational in 1970 — came in the course of just nine months.

“Is there anyone more deserving than Dale because he was on the map long before I was — and really kind of established that Colorado did have a golfer who went out on Tour and succeeded,” Irwin said.

Fifty years ago this year, when Douglass prevailed by four strokes in the 1969 Kemper Open, the fellow Buffs shared a memorable moment just as the event concluded.

“I’ll never forget when I won the Kemper Open in 1969, Hale was the first person to congratulate me on the 18th green,” Douglass said. “He had played earlier and waited around. I’ve always felt that was a great thing he did then.”

Like Irwin, Douglass spent his early years in the central U.S. — Douglass in Oklahoma and Irwin in southeastern Kansas — and moved to Colorado in their early teens. Douglass spent his high school years in Fort Morgan and his college days at CU. And even during a PGA Tour and Senior Tour career that lasted more than 50 years, Douglass has resided part-time in Colorado — in Boulder and Castle Pines.

Asked about his golf prowess during his formative years, Douglass said with a bit of a laugh, “Well, I was the best player in Fort Morgan. But I never won a club championship. I must have been about 17 years old, and I lost to my dad (Hal, who would later turn pro) in the finals of the club championship in Fort Morgan. That’s the closest I came to doing any good there.”

Since 1987, an annual tournament bearing Douglass’ name, the Dale Douglass Classic, has been conducted in Fort Morgan. In conjunction with that event, golf-related scholarships for college-bound students have been awarded to deserving recipients from northeastern Colorado.

As for his days at CU, the Buffs back then played mainly dual matches. Douglass had an impressive 30-9 record in those matches. To make ends meet while at CU, he sold programs at home sporting events, ushered during football and basketball games and then cleaned up after.

Douglass was a member of the Kappa Sigma fraternity during his CU days, and one of his fraternity brothers in the mid-1950s was a certain Robert Redford. Yes, that Robert Redford. Redford only attended CU for a year and a half, but was born the same year as Douglass (1936).

“I knew him,” Douglass said of Redford. “In fact, I called him to ask him to play in the Crosby (the PGA Tour stop at Pebble Beach in which a pro-am is held during championship rounds) one year. He wasn’t able to (play). He was going to be doing a movie and it turned out to be (Butch Cassidy and the Sundance Kid). He was filming that and therefore couldn’t play with me. I ran into him one time in (Utah). He recognized me and we had a nice visit.”

After graduating from CU in 1959, Douglass turned pro the next year. For a time he served as an assistant professional at Lakewood Country Club.

Over a tour career that lasted 51 years, he’s competed in a remarkable 1,131 tournaments between the PGA Tour and PGA Tour Champions. To put that into perspective, Douglass is fifth on the all-time list of career starts, coincidentally one spot behind Irwin (1,138 as of the end of September). Ahead of them are Miller Barber, Dave Eichelberger and Tom Kite.

An even 600 of Douglass’ tour starts are on PGA Tour Champions, second only to Barber’s 603.

While Douglass’ longevity on tour is certainly impressive, what he did during his half-century on the PGA Tour and PGA Tour Champions is likewise so:

— During the prime of his PGA Tour career — when he won three times in ninth months in 1969-70 — he earned a spot on the U.S. Ryder Cup team in 1969, when the Americans and Great Britain & Ireland tied 16-16 in England. Douglass is one of the less than 200 American golfers who have ever competed in the Ryder Cup.

— Less than 40 players have won 10 or more times on PGA Tour Champions, and Douglass is one of them, having captured 11 senior titles from 1986 to ’96, and placing second seven times. In addition, he teamed with Charles Coody to claim three titles in the Legends of Golf.

— Douglass remains one of the 10 youngest winners in the history of PGA Tour Champions, having captured the 1986 Vintage Invitational at age 50 years, 18 days. He also is one of the rare players who have won on PGA Tour Champions after age 60 as he captured the title in the 1996 Bell Atlantic Classic about four months after his 60th birthday. All told, Douglass has shot his age or better eight times on the Senior Circuit.

— In his magical season of 1986, Douglass won four times on PGA Tour Champions, including arguably the most prestigious event in all of senior golf, the U.S. Senior Open, at Scioto Country Club in Columbus, Ohio, where he beat World Golf Hall of Famer Gary Player by one stroke. Douglass finished third on the senior money list in ’86.

How hot was Douglass when he started on the Senior Tour? He led or shared the lead after eight of his first 10 rounds on that circuit.

For the five months after turning 50 on March 5, 1986, Douglass notched three victories — including that U.S. Senior Open — and posted a remarkable 13 top-10 finishes and 10 top 6s.

“The three tournaments I won on the PGA Tour were probably highlights of my career,” Douglass said recently. “I put them a notch above — or maybe two notches above — winning the (Senior) Open. On the other hand, when I turned 50, I hit the ground running on the Senior Tour. The first tournament I played in was Sun City in Arizona and I lost that tournament in a playoff. Then I won the next two tournaments, then won two more after that (later in the year), including the Senior Open.”

During both Douglass’ time on the PGA Tour and PGA Tour Champions, consistently by his side was wife Joyce, who, like Dale, attended CU.

“I like talking about Joyce. She was a big part of my life,” Dale said. “She passed away in 2016 on June 28. She was my partner. She traveled with me almost all the time. She’d get fed up with it every now and then and have to quit.

“We were married 58 years and we were sweethearts at least two years before that. When you were following me, you were actually walking with Joyce. She took care of my gallery.”

The Douglasses never had any children, but they did have a regular traveling companion. That was “Niblick”, their Yorkshire terrier, who accompanied the couple most of the time for 17 years during the 1970s and ‘80s.

“We had interesting times with him on the tour, but we wouldn’t have traded him,” Douglass said.

Asked if they got another dog after Niblick, Douglass said no. “We figured he was the best, so we didn’t get another one.”

Besides his victories on the PGA Tour and PGA Tour Champions, Douglass has several notable wins in Colorado and regionally. That includes the 1978 Jerry Ford Invitational in Vail; the 1983

Frontier Airlines Pro-Am at The Broadmoor Golf Club, where he beat PGA Tour veterans Billy Casper and Don January; the 1983 Colorado PGA Professional Championship; and the 1965 Arizona Open. He was also low amateur at the 1959 Wyoming State Open.

Douglass hasn’t competed in an official event on PGA Tour Champions since the 2011 U.S. Senior Open. But he still enjoys getting out to play and practice. During the warm months, that’s mainly at Castle Pines Golf Club, a course on which he’s lived since 1980.

“What I do now is spend a lot of time playing and practicing,” Douglass said. “An 83-year-old trying to get better is an ugly site.

“I play a few rounds. What I like to do — and have always done — is go out on my own and get some extra shots. I do that every day just about.”

In the cold months in Colorado, Douglass lives in Scottsdale, Ariz. He recently downsized to a smaller home after long living in Paradise Valley.

“I was less than a mile from Hale (and Sally Irwin),” Douglass noted. “They take good care of me. They invite me over for dinner periodically.”

It seems only appropriate for one of the first Hale Irwin Medal recipients.