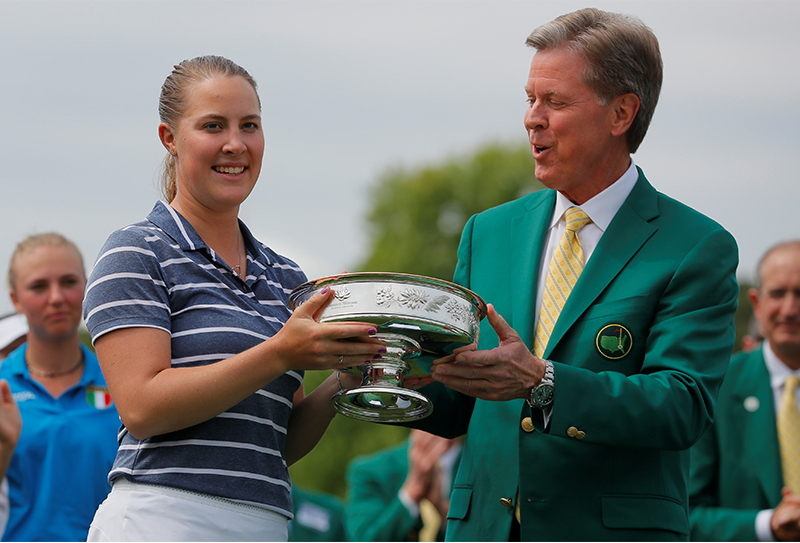 It seems like just yesterday — though it was actually almost 15 years ago — that Jennifer Kupcho started competing in Colorado Junior Golf Association events, another cute face among the many you’ll find in the youngest group of junior tournament golfers.

It didn’t take long for Kupcho to start separating herself from the crowd. And, as she’s climbed through the competitive ranks — from those initial steps in the 10-&-under age group to high school to top-level junior golf in the state to the college ranks and national and international amateur golf to the LPGA Tour — she’s still separating herself.

For observers of the golf scene in Colorado, the progression has been fascinating to watch if for no other reason than wondering “how high can Kupcho go?”

It was in 2012, when Kupcho was 15, that she moved to the head of the class in the Colorado girls ranks as she claimed the first of three straight female junior player of the year awards. In 2014, at age 17, she was named CWGA Player of the Year for the first of three straight years, which would have been four had the CWGA not elected to create a new honor to recognize her dominance. By 2018, the year she won an NCAA individual title at Wake Forest, she ascended to the No. 1 spot in the women’s World Amateur Golf Rankings.

And, after turning pro in late May of this year, it took Kupcho almost no time to climb into the top 100 in the Rolex Women’s World Golf Rankings.

Given that, without a doubt, Kupcho is one of the most accomplished female golfers to emerge from Colorado, it’s little surprise that the longtime Westminster resident joins Dale Douglass as the first recipients of the Hale Irwin Medal that will be awarded on Nov. 23 at the Hale Irwin Dinner at The Broadmoor Resort in Colorado Springs.

The honor is appropriate given that Kupcho was once a prominent member of the Hale Irwin Player Program at CommonGround Golf Course in Aurora. And while Irwin is the only Colorado-bred golfer to win the men’s individual NCAA Division I national title, Kupcho stands alone as his female counterpart in that regard.

“Jennifer Kupcho, my gosh you look at what Jennifer has done, it’s absolutely terrific and well-deserved,” Irwin said in the spring. “When we first (thought about) who this award would go to, Jennifer’s name just leapt out.

“Early indications are that’s she’s got a very, very bright future ahead of her — and I’m happy for her,” Irwin added later in the year.

Kupcho was named an Irwin medal honoree at the very beginning of April, and she’s added much to her resume since then, but her sentiments then hold true now.

“Hale Irwin is the greatest player to come out of the state of Colorado so to get this award with his name on it is just an incredible honor,” she said. “I hope to be the best female to come out of Colorado one day, so it’s great to be able to get an award named after him.”

Kupcho had accomplished plenty before the inaugural Irwin Medal honorees were announced in the spring, but her ascendency curve has become even steeper since.

Within a week after participating — via teleconference — in a press conference with Irwin, Kuphco won the inaugural Augusta National Women’s Amateur, out-dueling Maria Fassi to win by four on national TV the week before the Masters.

Kuphco had won the women’s NCAA individual title the year before, but the significance of this event was at another level, given the attention it drew. Kuphco overcame a mid-round migraine headache on the final day — during which she could barely see — and rallied after being two strokes behind through 12 holes by playing her final six holes in 5 under par.

She eagled the famous par-5 13th at Augusta National from 6 feet. And on the par-5 15th, she slung a big draw around trees that were between her and the pin, with her ball trickling just over the back edge of the green. From there, she two-putted from 18 feet for a birdie. Then she birdied the par-3 16th from 10 feet to take the lead for good.

“It’s unbelievable just to be able to say that I hit the opening tee shot of the tournament, then holed the last putt at Augusta National,” Kupcho told ColoradoGolf.org that evening. “That’s never happened before, and to be the first person to do that is unbelievable. To be able to do that with all the support that we’ve gotten … We have a big movement going for women’s golf and I think it’s going to get even greater.”

Kupcho certainly gained the attention of the golf world with how she won — especially with it being the first ANWA.

“It’s what great champions do,” NBC’s Gary Koch said at the time. “They come through in the clutch, and that’s what (Kupcho) did.”

Subsequently, Kupcho and Fassi went on a whirlwind media tour, appearing on the Today Show and The Tonight Show Starring Jimmy Fallon, among others.

Almost immediately after wrapping up her college career, Kupcho turned pro. She had earned her LPGA Tour card in November 2018 by finishing second in the inaugural eight-round LPGA Q-Series. And though it put her in a somewhat precarious situation, she deferred accepting LPGA membership until completing her senior season at Wake Forest. That decision gave her five fewer months to earn the money necessary to retain her LPGA status for 2020.

As it turned out, missing those five months of LPGA action was irrelevant. Kupcho made her pro debut at the U.S. Women’s Open after qualifying for the event for the third time (she would have been exempt for the championship had she remained an amateur). At age 22, it was her 12th USGA championship.

July proved pivotal as Kupcho recorded two top-five finishes in LPGA events, including one in a major championship. At the Marathon Classic, where Kupcho posted a top-20 finish as an amateur in 2018, she tied for fifth. And two weeks later, in France at the Evian Championship — that aforementioned major— Kupcho shot a final-round 66 to share second place. The $290,788 in prize money guaranteed the Coloradan a fully-exempt spot on the LPGA Tour in 2020. Ironically, Kupcho had been the last player to make it into the Evian field, based on 2019 money-list standings.

“Coming in from the Marathon and playing so well, it was nice to know that I earned it,” Kupcho said at the time. “I wanted to prove that I should be here.”

Then this month, Kupcho recorded her third top-five finish in less than six months on the LPGA Tour by tying for fourth in the Toto Japan Classic.

When she looks back on all that’s occurred since the early spring, even Kupcho is a little taken aback.

“It’s kind of crazy to see it all happen,” she said early in the summer. “It’s definitely really busy and kind of stressful at some points. But it’s been a lot of fun and it’s great that people are looking up to me and want to be where I was. It’s hard to get used to, but it’s definitely cool.”

Colorado Golf Hall of Fame Jill McGill, who earned more than $2.3 million on the LPGA Tour, believes, like many other people, that big things could be in store professionally for Kupcho.

“Amazing,” McGill said regarding Kupcho as she launched her pro career. “I’m so happy to see what she’s doing out there. It seems like she has a really strong head on her shoulders. I think she’s going to be just fine.

“From everything I’ve read and seen, I think she probably has some really good guidance and that she’ll be able to be very successful (as a pro).”

The victory at the Augusta National Women’s Amateur in April was definitely a launching point, but the year leading up to that was also full of major accomplishments for Kupcho:

— Kupcho, the 2017 Canadian Women’s Amateur champion, won the 2018 NCAA Division I individual title a year after finishing runner-up in that event. She became the first Colorado woman to capture that national championship. Kupcho finished her college career with nine individual victories.

— She placed second out of 102 players in the eight-round LPGA Q-Series last fall, easily earning her LPGA Tour card.

— In 2018, she represented the U.S. on winning teams at the Curtis Cup, Arnold Palmer Cup and women’s World Amateur Team Championship, finishing second individually in the world event.

— She became the first American woman to win the prestigious Mark H. McCormack Medal as the top women’s player in the World Amateur Golf Rankings as of the conclusion of 2018 U.S. Women’s Amateur.

— She was named world’s top female amateur golfer of 2018 by Global Golf Post.

But long before any of that, Kupcho shined in Colorado. The native of Littleton, the younger sister of 2012 CGA Player of the Year Steven Kupcho and daughter of Mike and Janet Kupcho, gradually developed into a stellar player thanks in no small part to PGA instructor Ed Oldham from The Ranch Country Club in Westminster.

She twice finished second in the CoBank Colorado Women’s Open, including as a 17-year-old in 2014.

In 2013, she represented Colorado in the USGA Women’s State Team Championship as a 16-year-old.

Both a golfer and a basketball player at Jefferson Academy, she won 4A girls state high school individual titles by 14 strokes in 2014 and by 10 in 2015.

And, especially pertinent to receiving the Hale Irwin Medal, she was a member of the CGA’s Hale Irwin Player Program at CommonGround Golf Course in 2014.

Not surprisingly, Kupcho drew some inspiration from what Irwin accomplished after growing up in the Centennial State.

“It was hard for me. Being from Colorado, I couldn’t practice in the winter,” Kupcho noted. “If I did, it was in an indoor bay, which is super boring. It’s hard to think that you can actually get as highly ranked and as good as (the top players in the world). And to see that out of (Irwin), that’s cool and that’s awesome. It kind of helped to motivate me to get where I am now.”