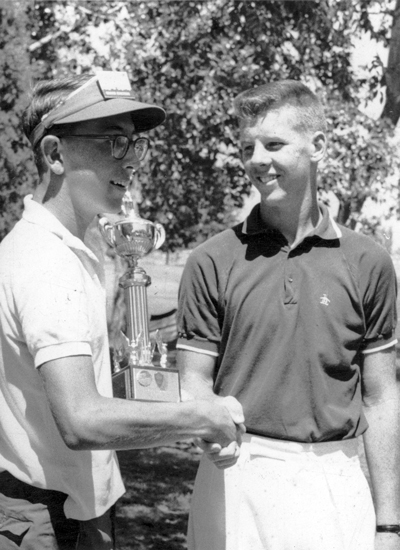 When the Irwins did move to Boulder when Hale was 14, it was only appropriate that they settled in very close to Boulder Country Club, at a site now known at Flatirons Golf Course.

“When we moved here, we stayed in a little motel until our house was being finished right across from the old Boulder Country Club (near the current site of BDT Stage),” Hale Irwin said. “My brother (Phil) and I would go across the street — everything was a playground at Baxter Springs; there weren’t any fences. So Pogo Pettyjohn — he was the marshal — would come out on his Vespa and chase us off. It became a challenge. Could we go and get balls out of the lake before Pogo found us? Then I’d caddie. I’d take the caddie fees and go pay the green fees to go play. Those were the good days, but they were learning days.”

It didn’t take long for Irwin to prove a success in tournament golf. His learning curve was indeed steep.

“When I was 14 we had just moved to Colorado and I played in the local Jaycee event” at what is now Flatirons Golf Course, he said. “I had never played a tournament before, and I won it. That took you onto the state tournament, where I finished third. That took you on to nationals, which was back in Virginia. So I look back and the tournament blood, I got the injection then. My first tournament and I won it. I can remember being so excited. And the rapid success of going on and seeing what golf could do … Just in three tournaments I had gone from southeast Kansas to Boulder to (another Colorado site), then on to Virginia. So it was pretty exciting stuff.”

Irwin — who attended Casey Middle School upon moving to Boulder, then graduated to Boulder High School starting in his sophomore year — competed in golf, football and basketball at BHS, and excelled at each. And though he didn’t compete in high school baseball, he was good enough to play one summer for the Boulder Collegians, a semipro baseball team.

“I think all athletes that are that level are competitive in pretty much everything they do,” noted Irwin’s son Steve. “One thing people might not know about dad is how good he is at other sports as well. Obviously football, but he was a great baseball player, a really good basketball player. Pretty much any sport he’s done, he’s been very successful at. Anything that he’s trying to do, he’s going to be the ultimate competitor at it — whether it’s horseshoes on a family trip or we’re messing around with putting contests or whatever the case may be.

“There’s a competitiveness but also a lightheartedness there of enjoying the moment and not all about grinding that especially in recent years has started to come out more.”

Ironically, Irwin didn’t initially go out for football as a high school sophomore.

“We went down to Boulder High one practice during the preseason practices and watched, then the next thing I knew the coach talked us into going out for the team. It took a couple of weeks, but before I knew it I was on the varsity. Kayo Lam (now a Colorado Sports Hall of Famer, who played in the same CU backfield as Byron “Whizzer White”), his son Bill Lam was the quarterback. I soon became the quarterback. And I played cornerback on defense. That stayed with me throughout my high school football career.”

In basketball, Irwin was a feisty defender and an All-Northern Conference selection.

“I always got the assignment on defense to guard the best player on the other team,” he said. “I guess defense was always in my blood in some way or another.

“I remember one year we played (Aurora Central) and Lynn Baker (who would go on to play basketball at CU),” Irwin said. “And I didn’t realize how high he could jump. I would try to block him out and he would still sky right over me and got every rebound. I thought, this is the hardest guy I’ve ever had to try to block out.”

And then, of course, there was golf. The year 1962 proved a big step forward on a statewide basis for Irwin as he won the CGA Junior Match Play. Then in 1963 as a senior, Irwin not only captured the individual state high school title (pictured above on left), but he led Boulder to the team championship. Also on that state title-winning golf team was Dick Anderson, who would go on to play in two Super Bowls and intercept 34 passes in his career with the Miami Dolphins. Anderson was a year younger in school than Irwin, while Dick’s brother Bobby was three years younger than Hale.

“In high school during the winter, he’d go shovel a place just large enough to hit practice balls and another place to hit them in,” brother Phil once said about Hale.

It should be noted that in the early 2000s when the Daily Camera newspaper in Boulder surveyed longtime members of the sports staff about their all-time top male and female athletes from Boulder County, all four of those questioned picked Irwin No. 1 on the male list. That includes Dan Creedon, who was worked at the newspaper for almost 40 years and covered Irwin at Boulder High School and CU.

For perspective, other prominent people who made those lists were Dick and Bobby Anderson, cyclist Davis Phinney and former NFL standout Tony Boselli.