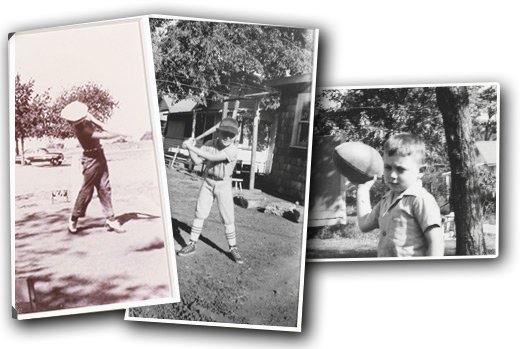 Considering what Irwin has accomplished in golf, it’s hard to fathom where it all started for him.

That would be on a sand-greens golf course in Baxter Springs, a small town in southeastern Kansas where the borders of that state, Oklahoma and Missouri meet.

After being born across the state line in Joplin, Mo., then living as a baby in northeastern Oklahoma, Hale, father Hale Sr., and mother Mame moved a short trip north into Baxter Springs, Kan. The area is more known for producing Mickey Mantle, who grew up less than 15 minutes from where the Irwins did, though Mantle was born almost 14 years before Hale Irwin.

Though Irwin didn’t play a lot of golf while living in Baxter Springs — and no tournament golf — that he did play was on a course that featured sand greens. (It should be noted that Baxter Springs Golf & Country Club now sits on Hale Irwin Road.)

“Baxter Springs Golf Club had a nine-hole sand-green golf course,” he recalled. “I don’t think there was enough grass to mow it. There were just dirt tees. The ground was so hard in the summer that you just sort of scraped up the dirt for a tee.

“There were these circular discs that were probably 50-60 feet in diameter. They put the sand on there, then thickened it up a little bit with oil so it doesn’t blow away. Then you had what we called drags — metal things that you put on the sand and create a path for your putt. At least in Baxter Springs, on the flag pole, which is always at the center of the green, they had a string. And if your ball hit the green, you’d take the string, stretch it out to your ball, take it over to this path and put it down beside it. Then you’d take this metal contraption and drag down that path so you have a smooth path.”

Asked if he played much golf in those days, Irwin said, “Not really. It was baseball country. Mickey Mantle grew up in Commerce, Okla., which was 10-15 miles from where I lived. Ralph Terry spent some time in that area, so a couple of Yankees that influenced baseball were there.

“None of my buddies in this little town played golf, but I was drawn to it because I could do it on my own. To do everything else, you had to have someone to play catch with or throw a football or whatever it was. (With) golf, my dad would take me out. He’d take some old clubs, cut the shafts down and wrap the shaft in electrical tape for the grip. I had a handful at best of those clubs to learn with and I just enjoyed going out with him. I kind of got the bug even though I didn’t play a lot and didn’t play in any tournaments — there weren’t any tournaments and there was no such thing as a junior program.

“My mom would take me out with a peanut butter and jelly sandwich sometimes and just drop me off at this golf club and I’d play a few holes and I’d go in the woods and look for golf balls. Then she’d come back and get me for swimming or baseball practice or whatever it was.”

Asked how much he played on a grass course prior to moving to Boulder at age 14, Irwin said the total was three times — once at what is now Flatirons Golf Course in Boulder and twice at Schifferdecker Park in Joplin.