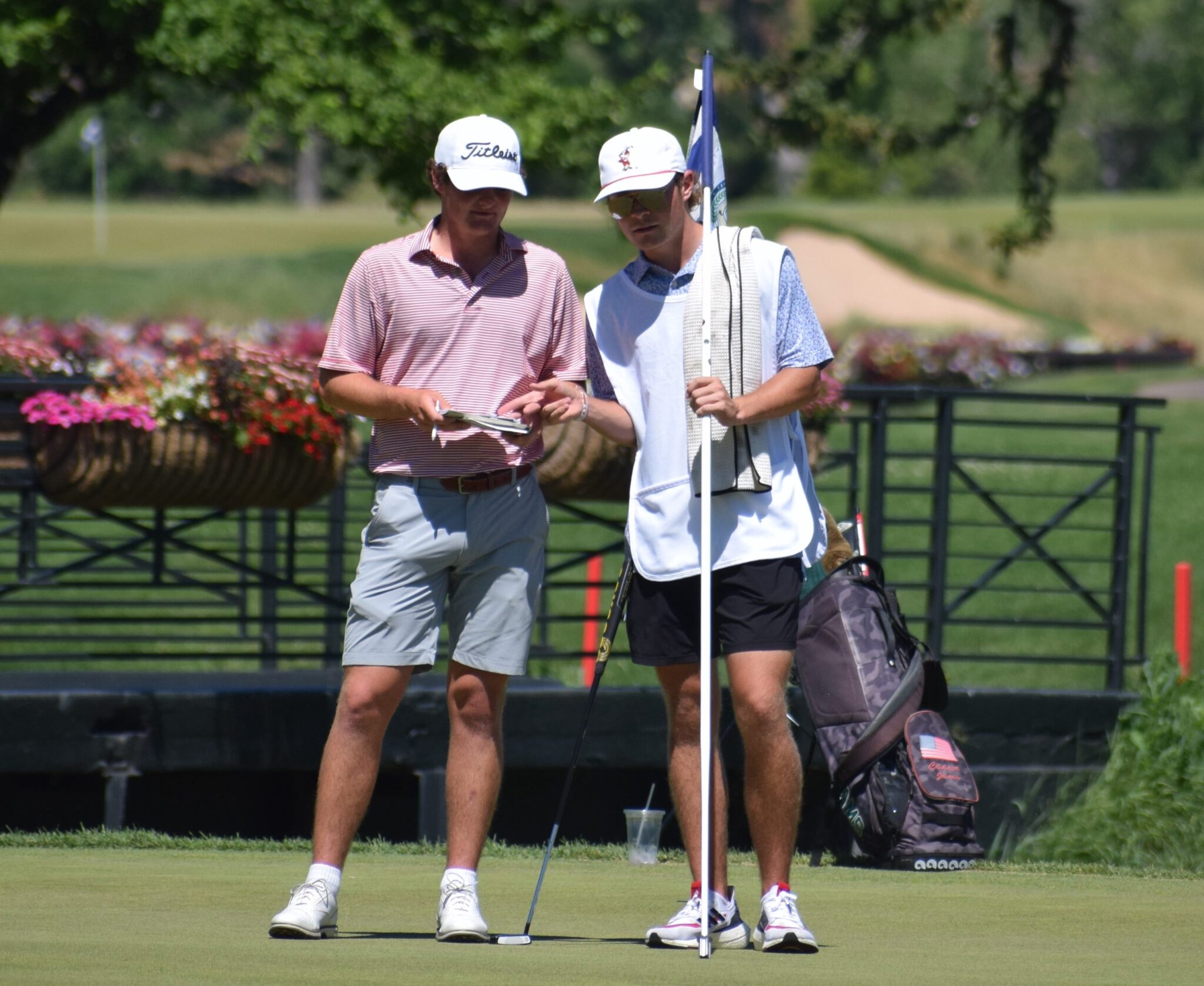 One of the many highlights of the year for Coloradan Connor Jones (left; pictured with Walker Franklin) was placing second in the Trans-Miss, a major amateur event.

All years, without exception, produce plenty of prospects for “stories of the year” countdowns. But that doesn’t mean that some don’t have more overall pizzazz than others.

In retrospect, 2022 seems to be one of those years that has produced more than its share of big-time news items — at least regarding Colorado golf. Readers can see if they agree as we begin our rundown of the biggest stories of 2022 regarding golf in the state.

As has become the norm in recent years, we break up the top 25 stories into two parts, running them in reverse order for suspense sake, then include some honorable-mention selections.

So, without further ado, we’ll proceed with Part I — the 25th through 13th biggest golf stories of the year, at least in the estimation of yours truly. Part II — Nos. 12 through 1, with honorable-mention picks — will be published later this week.

25. Wil Collins of Albuquerque, at age 43, became the eighth multiple-time winner of the Colorado Open, which debuted in 1964. Taking time away from his day job as a mortgage broker, Collins prevailed in July after previously capturing the title in 2005. Only Jonathan Kaye (1996 to 2017) has gone longer between Colorado Open victories. Meanwhile, Connor Jones of Westminster set the championship’s amateur scoring record by four strokes in placing third overall. (More on Jones’ year later.) READ MORE

24. Drew Stoltz, who grew up in Fort Collins and won the 2001 5A state high school individual title and the 2004 CGA Amateur, teamed up with Drew Kittleson and came ever so close to capturing the title at the U.S. Amateur Four-Ball. But their opponents, Chad Wilfong and Davis Womble of North Carolina, rallied to win the 18th and 19th holes to claim the victory. Stoltz and Kittleson, two reinstated amateurs, were finalists after originally being second alternates in their qualifying tournament. Stoltz is perhaps best known today as a co-host of the shows “Gravy and the Sleeze” on Sirius XM’s PGA Tour Radio and the “Golf Subpar” podcast. READ MORE

23. Kyle Westmoreland, a former Air Force Academy golfer who lived in Colorado Springs and Broomfield while on active duty, birdied the final hole of the Korn Ferry Tour Finals and earned the last PGA Tour card available through the KFT in 2022. It’s the first time in history that an Air Force Academy grad has held a PGA Tour card. With it, thanks to the new Earnings Assurance Program, Westmoreland is guaranteed the $500,000 — paid up front to rookies — that goes to PGA Tour members who compete in at least 15 events in a season. Westmoreland played in the 2021 U.S. Open and made the cut, finishing 68th. READ MORE

22. Yannik Paul, the former University of Colorado golfer who lives part-time just east of Boulder, won as a rookie on the DP World Tour — formerly known as the European Tour. The twin brother of fellow former Buff Jeremy Paul, Yannik sank a 14-foot birdie putt on the final hole to take the title at the Mallorca Golf Open, calling it a “dream come true.” Paul, who earned 347,826 euros, joined Matt Zions as former CU golfers to win on the DP World Tour in the 21st century. Zions, a now-reinstated amateur who claimed the title in the 2021 CGA Mid-Amateur, earned his European victory at the 2011 Saint-Omer Open. READ MORE

21. Hunter Swanson of Denver went where very few junior golfers in Colorado have gone before him. For three consecutive years, he was named Boys Player of the Year in Colorado. He was the Junior Golf Alliance of Colorado’s BPOY in both 2020 and ’21, then he earned CGA BPOY honors this year, his final season as a junior. Before beginning his college career at the University of Colorado, Swanson won the First Tee National Championship the year after placing second in the same event. Swanson also won a Colorado junior major this year — the Colorado Junior PGA Championship. Meanwhile, Matthew Wilkinson of Centennial — and now Colorado State — the 2021 JGAC Boys Co-Player of the Year, won the fourth Colorado junior major of his career, prevailing at the CGA State Junior Championship.

20. It was a fitting preview of sorts as the 2023 U.S. Amateur will be coming to Colorado — Cherry Hills Country Club specifically. This past summer, Denver Country Club hosted the Trans-Miss — part of the Elite Amateur Golf Series — with the event drawing 10 of the top 100 amateur golfers in the world. One of those top 100, William Mouw of Pepperdine claimed the title after making a 25-foot birdie putt on the second hole of sudden death. Placing second — in his home state — was Connor Jones of Westminster and CSU, who barely missed his 14-foot birdie attempt on the second extra hole. Mouw became the second straight Pepperdine golfer to win the Trans-Miss as Derek Hitchner claimed the title in 2021. READ MORE

19. Joe Assell, the co-founder and CEO of Englewood-based GOLFTEC, was named the national PGA of America Executive of the Year. Later, the longtime Colorado resident moved up to No. 21 on Golf Inc.’s list of the power powerful people in golf. GOLFTEC is an ever-expanding company focused on instructing, training systems and club fitting, with its success due in large part to Assell’s leadership.

18. Over the last couple of years, Leigha Devine of Windsor went where few Colorado female amateurs have gone in recent decades. In 2021 and ’22, the Rutgers golfer won three straight CGA women’s majors — two Match Plays and one Stroke Play. She was the first player since Wendy Werley in 1988 and ’89 to go back-to-back in the Women’s Match Play, and she placed second in her title defense at the Women’s Stroke Play to Kelsey Webster, the low amateur in the Inspirato Colorado Women’s Open. Devine also not only qualified for the 2022 U.S. Women’s Amateur, but advanced to the round of 32. Then in September, she claimed an individual college title for the first time. Not surprisingly, Devine was named CGA Women’s Player of the Year in both ’21 and ’22. READ MORE

16. Mike McGetrick, the 1999 national PGA of America Teacher of the Year and winner of a record four Teacher of the Year awards from the Colorado PGA, was named one of the newest inductees into the World Golf Teachers Hall of Fame. McGetrick was one of the founders of Colorado Golf Club in Parker and he headed the McGetrick Golf Academy during his years living in Colorado. READ MORE

15. Matt Schalk of Erie became the second Coloradan in the last 15 years to win the national Senior PGA Professional Championship, joining Colorado Golf Hall of Famer Bill Loeffler, who prevailed in 2007. Schalk, the PGA general manager at Colorado National Golf Club who captured the Colorado Senior PGA Professional Championship 2 1/2 months earlier, prevailed in the national event against a field that numbered 264. The victory earned a spot in the 2023 KitchenAid Senior PGA Championship and in the final stage of PGA Tour Champions Q-school, where he went on to finish 48th. READ MORE

14. Colorado Golf Hall of Famer Mark Crabtree, who coached the CSU men’s team for a decade before spending 21 years at Louisville, earned a spot in the Golf Coaches of America Hall of Fame. The four-time CGA Match Play champion joined Gene Miranda from the Air Force Academy (1997) and the late Mark Simpson from the University of Colorado (2004) as a GCAA Hall of Famer. Crabtree served a two-year term as national president of the GCAA, from 2008-10. All told during Crabtree’s time there, Louisville won 30 team titles and advanced to the NCAA Regionals 11 times and to the NCAA national championship tournament four times, placing as high as 10th in 2008. Crabtree was named Big East Coach of the Year twice. READ MORE

13. One of the more tragic golf-related stories of the year nationally was when seven people — a coach and six players from the Hobbs, N.M.-based University of Southwest golf teams — died when their school van and a pickup truck collided in a high-speed head-on crash in west Texas on March 15. As it turned out, one of the fatalities was Jackson Zinn, a 2018 graduate of Ralston Valley High School. Also perishing were two people in the other vehicle, which crossed the center line. The driver of the pickup truck, who died in the crash along with his son, had meth in his system, according to investigators. The golf teams were traveling on a two-lane road from a college tournament in Midland, Texas. READ MORE