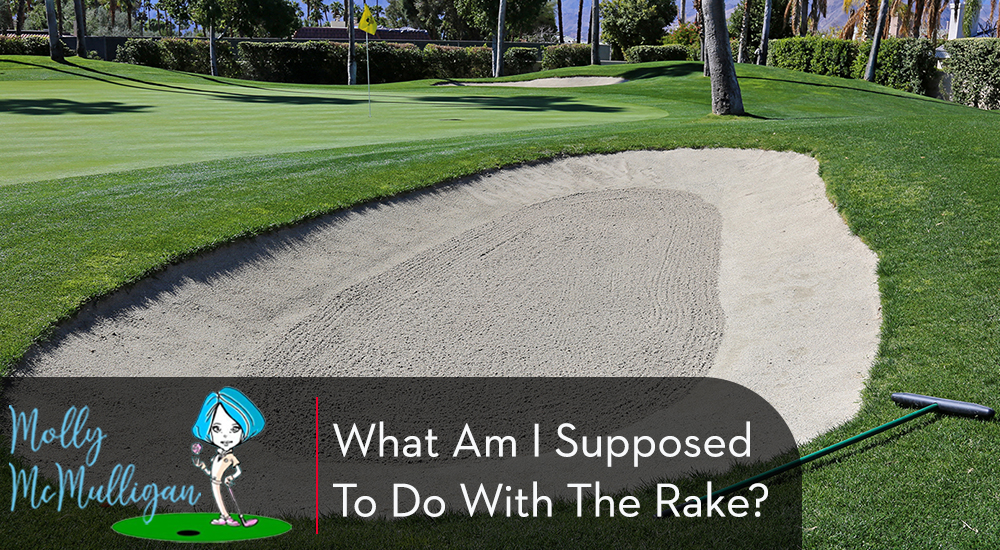 Dear Molly: Where and how should a rake be placed in a bunker? I’ve heard a few answers to this and I’m curious if there is technically a correct answer. Monica Kjosen, Pikes Peak Women Golfers and Above Par Mixed League

Hooray, Monica, you’re actually using the rake! It seemed many of us forgot that part of the game while pandemic safety measures removed rakes entirely. They’re back, but so many footsteps remain. So, thank you for endeavoring to do the right thing for your bunker mates. It’s bad enough to have a good lie in the sand but miserable to land in a hole left behind by someone’s size 14s.

You’ve heard a few answers to this because no technically correct answer exists. Nothing in the rules of golf tells us what to do with the rake after we’ve cleaned up. In rare cases, the course scorecard will state that rakes are to be placed inside or outside bunkers. Starters and the pro shop staff will never tell you unless asked. Most leagues fail to set policy. Even in a tournament, there’s rarely any guidance on the rules sheet.

So how’s this for an answer? At Patty Jewett next year, says superintendent Jeff Wichman, the rake itself will tell you. “We’re going to put stickers on the rakes that say, ‘Please place back into the bunker,’ “ Wichman says. “Maybe that will help.” Wichman explains that rakes-in works best for his crew because of the mowers. It also tends to discourage golfers who might be upset about a shot or feeling pressed for time from throwing rakes. Just be sure to put the rake in a flat spot of the bunker, so that it doesn’t create a tricky rules situation by holding a ball up on a slope.

“It causes a rules problem if the ball comes to rest against the rake in the bunker,” says Doug Jones, superintendent of Grand Junction’s municipal courses. “We leave the rakes out of the bunkers for that reason. But there’s no consensus in Colorado. It varies from course to course. Some courses put the rakes on their carts for players to use, with no rake by the bunker.”

That, of course, could present a dilemma for walkers, or a tug-of-war for the cart mates who have hit into bunkers on opposite sides of the green.

If it’s rakes-out and I’m playing a recreational round, I like to go one better and position the rake just in front of the bunker, perhaps preventing another player’s ball from rolling into the sand the way mine did. When it comes to bunkers, I figure we could all use some good golf karma.

But, please note, if you are playing in a tournament in Colorado, your best karma will come from following the advice of Lewis Harry, the CGA’s Director of Rules & Competitions.

“For initial placement when setting up the course, I and other tournament directors prefer that the rake is placed near the bunker with the least interference to incoming shots,” says Harry. “If a player was looking down a hole in the direction of the green, this would mean that rakes are probably placed outside the bunker to the sides, running parallel with the fairway.” Of course, Harry notes, “After one player uses it, it’s anyone’s guess on where the rake goes from there! But the above is a good principle to follow.”

Will our ‘birdie juice’ get us in trouble?

How do I get a gimme?

What can I do about obnoxious music?