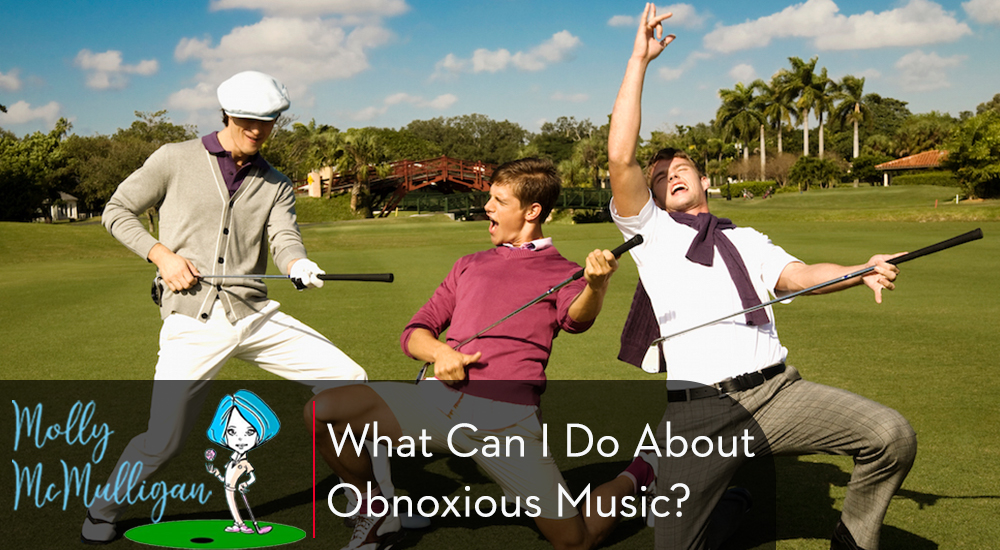 Dear Molly: I am getting used to hearing music from players’ carts and golf bag speakers when I play recreational golf, but it does not seem right to have to tolerate this kind of noise in competitions. Do I have any right to object? What can I say?

We all laughed when Rodney Dangerfield brought his boombox to Bushwood and blasted “Any Way You Want It.” Part of the fun, beyond his contorted dance moves, was seeing the disruption he created among all the country club stiffs. Now, 40 years later, wi-fi and the portability of quality speakers have made this an everyday scene at all public and many private courses. And whether you’re playing golf recreationally or competitively, it can make for an awkward conversation.

Let’s cover recreational rounds first. I love music, but not necessarily the same music you love. I go to the golf course to chat with companions and hear the birds chirp. When paired with players who blare Journey or the Broncos game, I simply ask them, as nicely as possible, “Could you use headphones or turn that off please?” And they turn it off, or put it on such low volume that I can’t hear it. And I say, “Thank you.” Polite players – so rare in our increasingly rude, me-first society – ask if you mind if they play music. CGA Executive Director Ed Mate says, “If you have to ask if it’s OK to play music, it is not OK to play music.” And that’s generally true: If I do not know the rest of the players in my foursome, there’s no reason to think they will want to listen to the soundtrack from “Moulin Rouge.”

But suppose it’s the club championship and you’re placed in a foursome with someone who insists on playing sounds you find obnoxious? Now the Rules of Golf come into play. Lewis Harry, the CGA’s Director of Rules & Competitions, notes that “Under the Rules of Golf (4.3), a player would normally be allowed to listen to music or to watch video content that is unrelated to the competition while playing a round, as long as they are not doing it with the intent to eliminate distractions or trying to decide strategy.” So, clearly, we’re not supposed to listen to a lesson. But who’s to say you’re not intending to eliminate distractions by blasting Bach? The vagueness of that rule has prompted some tours and associations to adopt Model Local Rule G-8, prohibiting players from listening or watching ANY media during a round.

“The CGA has this in effect on our Hard Card (for competitions),” Harry says. “The penalty for breach of this MLR is the General Penalty (two strokes) for the first breach and Disqualification for a subsequent breach. We’ve never had any pushback on that one; however, I would venture to guess that less than 1% of our tournament players have read the CGA Hard Card!”

You could be proactive about this issue and ask your club’s governing board to consider adding adopting MLR G-8, if only to head off any arguments or future appeals under, say, Rule 1.2, Standards of Player Conduct. This says, “All players are expected to play in the spirit of the game by…showing consideration to others – for example, by playing at a prompt pace, looking out for the safety of others, and not distracting the play of another player.” There’s no penalty for 1.2, however, unless your tournament committee determines a player has “committed serious misconduct” and disqualifies him or her.

Rule 1.2 does give you right to object in competitions where your club has not adopted G-8. What can you say? Well how about this: “Hey, I find music to be distracting. In the spirit of the game and under Rule 1.2, would you mind turning that off today?”

What kind of jerk would say no?

For a few last musical notes, I turned to the USGA. Their Rules team elaborated on Rule 4.3a, saying, “Listening to audio on matters unrelated to the competition being played is allowed (like background music) but consideration should be shown to others in doing so. Listening to audio to eliminate distractions or to help with swing tempo is not allowed.”

And, here’s a surprise: “In USGA championships, we don’t adopt the (Model) Local Rule to prohibit music.”

In other words, if our own Jennifer Kupcho wants to pay Caddyshack homage and launch “I’m Alright” from her golf bag speaker at the U.S. Women’s Open, she’s allowed!

At about that point, the USGA may rethink its vague rules. For now, a polite and respectful request is your way to go.