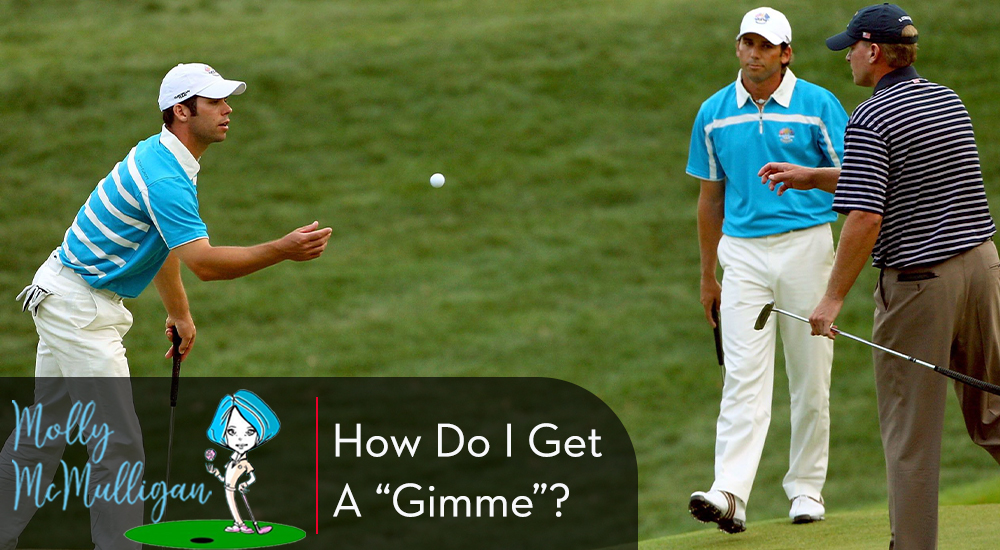 Dear Molly: On the Ryder Cup and Solheim Cup, players are always saying “good.” But in my group, nobody ever says a putt is good. Please explain the rules of the gimme. What do I have to do to get one?

This topic reminds me of the sign on the women’s club bulletin board of one Colorado golf course that
says, “Ladies, this is not the men’s club. You must putt everything out.” Sounds like at that course, it
helps to be a man if you want a gimme!

But, seriously, this is a complicated topic largely outside the Rules of Golf on which answers vary
depending on the level of your competition. So I turned to two senior champions with vast experience in
both state and national match play competitions. Kim Eaton, 63, and Kent Moore, 66, both Colorado
Golf Hall of Famers, had plenty to say about the gimme.

First, the everyday gimme. A traditional measure has been: Is the ball inside the leather of your putter?
Neither Eaton nor Moore mentioned that.

“I usually don’t do gimmes when I’m playing (recreationally),” says Eaton, who won her first Colorado
state match play championship in 2004. “I’ve seen too many people that give themselves putts all the
time when they play for fun. And then when it really matters in a competition, they have trouble making
them.”

Moore and his buddies at Cherry Hills may have generous circles of friendship (a common term for a
fluid gimme range), but there are times when one will take offense at a gimme.

“Maybe you play for a dollar or two dollars, it’s trivial, but it’s more the principle of the thing,” Moore
says. “You’re being a good guy, saying, ‘Pick it up,’ and the guy will say, ‘No, you need to make me putt
that.’ They want the satisfaction of making that 5-footer when they needed to.”

Technically, under the Rules of Golf, one cannot decline a conceded putt, the official term for a gimme.
But the Rules offer little more in the way of guidance, other than one should post the score they think
they would have had. Meaning, if you’re picking up a winding 40-footer, you’d better gaze deeply into
your soul before you write it off as a two-putt.

When a trophy is on the line, Eaton and Moore diverge a bit. She’s a bit more stin … uh, strategic.
“Sometimes I might give two or three gimmes and then I might make ‘em putt one, just because they
thought, ‘Oh, she’s giving these to me,’ and now when they have to putt one they might be a little
nervous,” she says. “Or if I’ve seen them miss a couple little putts, then I usually make ‘em putt
everything. Not the 6-inchers, but the 2-3-4-footers.”

Ouch. Some opponents get “a little mad” about that, Eaton admits. But she’s been on the other side of
that coin and says, “I’ll go back to my cart and think, ‘Gosh, I can’t believe they didn’t give me that,’ but
you know what? They have the right to do that. You can’t get mad if someone makes you putt
something out, because that is what match play is all about.”

Moore tells two tales that embody his own competitive philosophy: “I was playing a very good senior
player, a tremendous putter, and he hit it to about 4 feet at Buffalo Run. I gave it to him. My wife (Janet
Moore, also a Colorado Golf Hall of Famer) was caddying for me, and she goes, ‘That’s a bit long for a
senior event.’ And she was absolutely correct, but it seemed like the thing to do.

“The other story is about a guy we used to play a lot. I had about a 20-footer and I hit a terrible putt up
to about 4 feet. I went up to mark it and he said, ‘Pick it up. I do not want to win with you missing that.’ I
was sort of taken aback. His attitude was that he’s here to have a great match and play hard. I thought
that was fascinating. As we get older, winning a senior tournament is not quite like winning the state
match play or state medal play, it tends to be more about the comradery in the game.”

Moore says in seniors, the “good-good” has become a good friend to all. “Both guys knock it up to 4
feet. Nobody likes to grind on those putts when they’re in their sixties. So you just say ‘good-good.’ And
I’ve never had a ‘good-good’ turned down. Everybody’s so relieved.”

Janet, however, recalls a “good-good” proposed by a weaker putter to a stronger putter that was
rejected. The stronger player, Kent says, looked at the player who proposed that and said, “Let’s test
ourselves.”

Says Eaton with a laugh, “I always try ‘good-good,’ and sometimes they look at me like, ‘Really?’ If they
were smart, they’d realize that maybe I’m saying that because I really don’t want to hit this putt. Maybe
they should make me putt it, not do ‘good-good.’ “

Now for the team level, which many Colorado players reach with interclub and A, B and C teams. “It is a
lot different when you are playing for the team. It’s not just your gimme, it’s the team gimme, and you
have to be very careful,” Moore says. So while you may see many 2- and 3-footers tapped away in the
Ryder, Presidents and Solheim Cup matches, if you watch closely, you’ll see that a difficult putt that
matters is rarely conceded.

What do YOU have to do to get a gimme? For all the range of strategies and tactics on conceding putts,
there is one universal rule: Never ask for a putt to be given, or you can be sure it won’t be. And in casual
rounds not involving wagers or matches, nobody knows better than you when your putt is really “good.”
Just pick it up and keep moving!

Molly McMulligan, created by golf journalist and CGA member Susan Fornoff, is the CGA’s on-thecourse advisor on how to have more fun on the golf course. She deeply appreciates the experiences and relationships golf has brought her as she’s played everywhere from famed Cypress Point to a remote Scottish nine that had an honors collection box at check-in. Trust us, you don’t want to take swing lessons from Molly. But if you’ve got a question about etiquette, relationships or the culture of
golf in Colorado, Molly will find the answer. Send your questions along here.