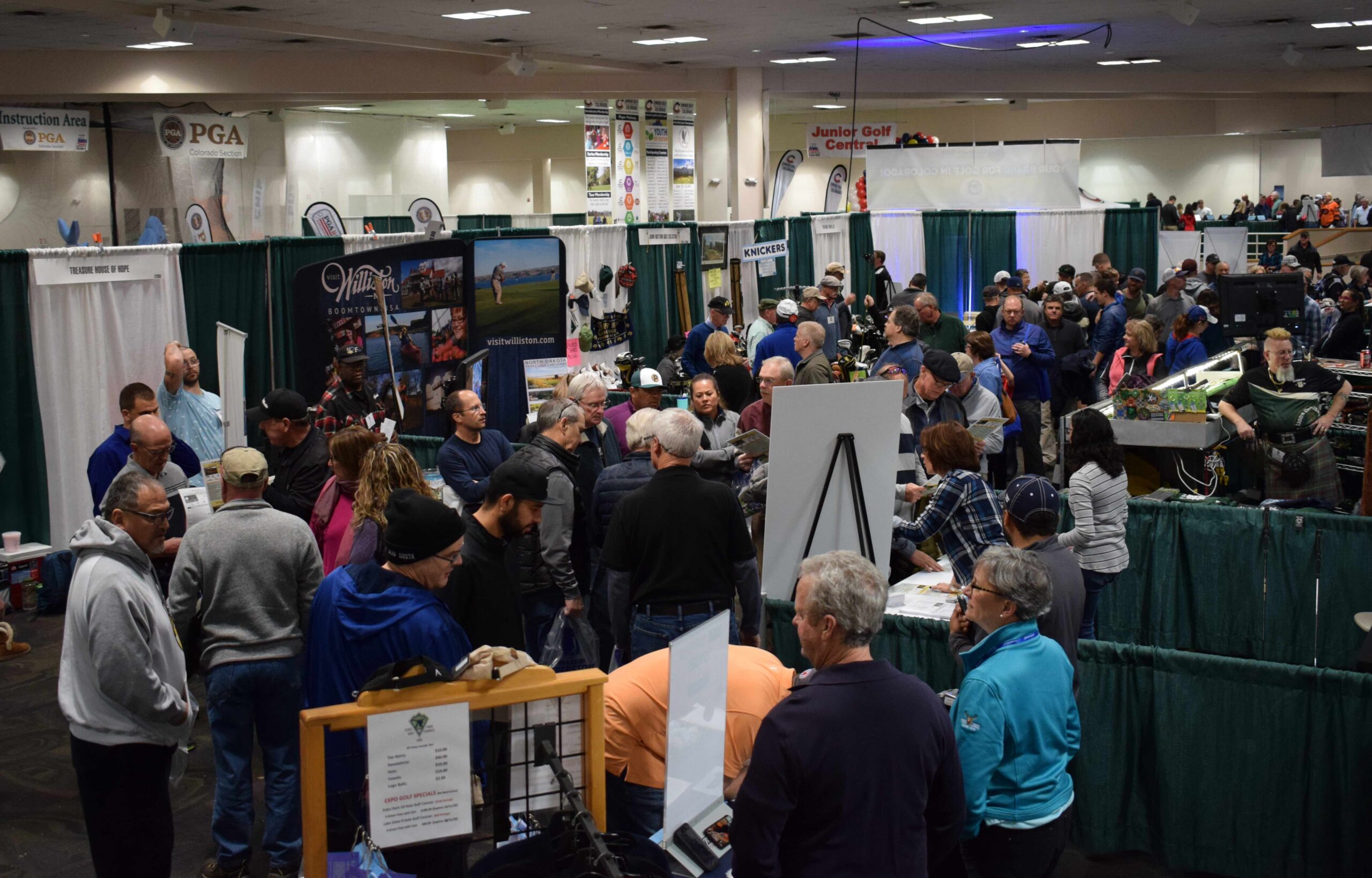 More than two decades ago, when Mark Cramer and his wife Lynn bought the Denver Golf Expo, Mark came up with a tag line for the annual event: “The Winter Gathering of the Colorado Golf Industry”.

“Pretty soon, it started getting repeated back to me: This is the winter gathering of the Colorado golf industry,” Mark noted this week. “I’d say, ‘Exactly.’ That was really cool — to speak something into existence like that.”

The recollection comes as the Cramers pass the torch on one of the big annual events on the Colorado golf calendar. On Nov. 30, they closed on their sale of what is now known as the Colorado Golf Expo, to Pueblo native Kevin Morton. The 2023 show, set for Feb. 17-19 at the Colorado Convention Center, will be the first under Morton’s ownership, though the Cramers will still have a hand in this one as the deal calls for them to do some consulting work during the show’s transition — leading up to, during and shortly after the ’23 Expo.

The sale marks the end of an era which began with the Cramers’ July 2000 purchase of the Golf Expo from Colorado PGA professional Stan Fenn. The first show with the Cramers leading the way came in early 2001. Every year since, with the exception of 2021 — when the show was virtual due to safety concerns in the wake of the Covid-19 pandemic — the Cramers have run an in-person Golf Expo. Their final tally as show owners: 21 in-person Expos, and one virtual.

Why did the Cramers sell the show now? Mainly for two reasons: Mark was diagnosed in 2020 with an autoimmune disease, which has made it more difficult to help oversee the many tasks involved with running the Expo; and the Cramers see the value in the fresh perspective that comes with new ownership.

“I think both Lynn and I feel the perfect word for (the sale) is ‘bittersweet’,” Mark said. “It’s good and bad. It’s good that I can devote more of my energy, focus and time (to his health issues, which have caused him to not play his beloved game of golf since 2019). The focus part (of the job) is tougher now for me. I think a lot of it has to do with the drugs they’re giving me for this autoimmune disease I’ve been diagnosed with. That’s affecting my focus and my thinking. And I’m tired a lot. So I want to get my health back.

“The other side of it is, the show does need fresh ideas and new blood. Lynn and I did what we did and we carried it as far as we could. I don’t know if it’s the autoimmune disease or the fact that I’m 69, but for the last three or four years (I wonder) if I’ve been creative enough. I couldn’t do enough for the show.”

The 2022 Colorado Golf Expo, held in late February, was one of the first shows held at the Colorado Convention Center in the wake of Covid-19, and it drew 7,928 attendees over three days. That was up slightly from the 2020 show that was held at the Expo’s longtime home, the Denver Mart, but it also was the third-lowest attendance figure since at least 2008, with only 2015 (7,195) and 2020 (7,806) being lower during that period.

The Golf Expo has long provided chances for attendees to get deals on merchandise, rounds and services; try new equipment; receive a lesson; and for organizations to provide educational opportunities and do marketing.

Morton, a 51-year-old who has lived in Colorado for the great majority of his life — though he attended Arizona State University — is looking forward to building on what Fenn and the Cramers have done before him with the show.

“I love golf in general,” said Morton, who played high school golf at Pueblo East and once served as a counselor during the summer at the Billy Casper Golf Camp. “I was in the trade-show industry (in the 1990s and early 2000s) on the other side, managing large booths (for his employer). I managed around 30 shows a year. I enjoyed that part of the business and I just love the trade-show business in general.

“When I heard, almost a year ago, that there was the potential the Cramers were going to be retiring, I thought this was an amazing opportunity for me to be doing something in golf and doing something people love. I’ve gone to (the Golf Expo) many times myself and I loved it.”

Morton has some ideas that might take the Colorado Golf Expo to another level, but he’s also eager to receive feedback as to what attendees, potential attendees and vendors want in the way of improvements.

“My plan is to use both digital and print media to drive traffic,” said Morton, who also is the director of business development for another company, Direct Mail Concepts, that does printing and direct mail. “I really am a believer that younger people are more social-media oriented and we need to focus quite a bit there to expand the reach to younger people. I think that’s unbelievably important for the show. I have a lot of focus groups that I’m working with on that. We’re trying to pin down how to get to that target market.

“I want people to understand the show is just a fun winter entertainment for golfers — to get them ready for the season. It’s just a fun tradition. I want to continue what the Cramers have done and keep going with that — along with really focusing on getting younger people involved.”

Mark Cramer believes Morton is a good person to take the Colorado Golf Expo into the future.

“I’m very impressed with him,” Cramer said. “He’s a very smart guy. He’s owned a lot of different businesses and he’s got a background in golf.

“Even though he’s not a trade-show manager, he’s been on the other side. He’s been an exhibitor. He’s got a very good intuitive sense for everything that’s going on. The questions he’s asking are very, very good questions — very to the point. He’s talking about where he’s thinking to take it and asking what we think. He’s thinking really good on this stuff. I think he’s going to be really good for the show. I think the show is in really good hands.

“Obviously we want him to be as successful as possible.”

Cramer said he and Lynn have been putting out feelers regarding selling the Golf Expo for the last four or five years. But it was through a passing mention of their sales plans — to someone they’ve long done business with at Direct Mail Concepts — that led to the Cramers and Morton coming together and eventually making a deal.

Mark and Lynn Cramer, through their Expomasters company, originally started that as a way run shows for non-profits who were outsourcing. That didn’t work so well, simply from a dollars-and-cents perspective.

“The non-profits were keeping us really non-profit. We were barely making it,” Mark noted. So the Cramers decided they needed to own their own shows. That led to owning and running the Rocky Mountain Audio-Video Expo since 1991 — a show they’re now also considering selling — and the Golf Expo since 2000.

Regarding the Golf Expo, it took a few years to convince Fenn to sell it to them. (Fenn, who worked for AGT Sports at the time, co-founded the Expo in the first half of the 1990s, with some help from fellow Colorado PGA professional Danny Harvanek, and a little funding from a former Denver Broncos player.)

Once the Cramers did buy the show, not all the big players in the Colorado golf industry were full-throated in their support in the early going. But, within just a couple of years, that changed. And now, going on decades, the CGA, Colorado PGA, Colorado Golf Hall of Fame and many golf facilities and retailers have been longstanding allies in making the show what it is.

“That’s been the greatest thing,” Mark Cramer said. “Finally, (after) being in the business of trade show and conference management, running international symposiums, promoting and doing a lot of stuff I didn’t really care about — business computing and promoting it — all of a sudden I had the opportunity to promote something I was really passionate about, which was the game of golf. That was a huge blessing.

“The other part of it was that the industry came underneath us and supported us. That’s the ‘bitter’ part of the bittersweet” reaction to selling the show.

The sale to Morton comes just a year after some of the biggest recent changes regarding the Golf Expo. Namely, as the Expo returned to an in-person show, it moved from its longtime home at the Denver Mart to the Colorado Convention Center — where it was held in its inaugural year in the 1990s — and changed its named from the Denver Golf Expo to the Colorado Golf Expo.

While the Cramers, who received the Colorado Golf Hall of Fame’s Lifetime Achievement Award in 2019, felt the time was right to step aside regarding the Golf Expo, there’s little doubt that they’ll miss certain parts of being involved in the event.

“The show has been good to us,” Mark said. “The industry has been awfully good to us.”

And, many might fairly say, the Cramers have been very good to Colorado golf.