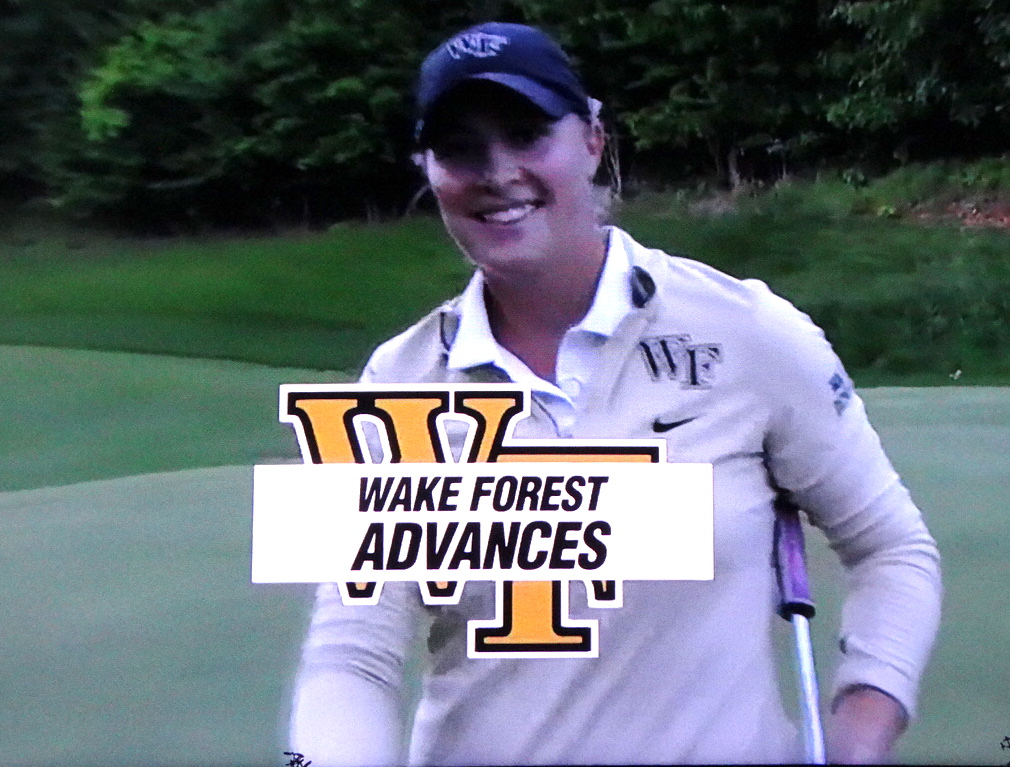 Jennifer Kupcho and her Wake Forest teammates are two wins away from a national team title.

The Westminster resident, competing in her final tournament as an amateur, and the Demon Deacons knocked off the host team, Arkansas, in Tuesday’s quarterfinal round of the women’s NCAA Division I nationals in Fayetteville to earn a berth in the final four.

Kupcho, who finished 23rd in her individual title defense during the stroke-play portion of the event, scored the winning point in the Wake Forest-Arkansas quarterfinal, defeating Kaylee Benton 1 up. With that, the Demon Deacons felled the Razorbacks and 2019 NCAA individual champion Maria Fassi, 3-2.

Kupcho, who was 3 up with four to play in a match in which she never trailed, calmly sank a 3-foot birdie putt on the 18th hole of her match (No. 9) to earn tie the hole and post the 1-up victory at Blessings Golf Club.

Her Wake Forest teammates celebrated the moment by hugging one another and Kupcho (pictured), the No. 1-ranked women’s amateur in the world and the Augusta National Women’s Amateur champion.

The Demon Deacons, seeded fifth in match play, will face eighth-seeded Auburn in Wednesday’s semifinals after the Tigers rallied to defeat top-seeded Texas, 3-2. The winner of that match will meet the Duke-Arizona winner for the national title on Wednesday afternoon.

Golf Channel’s coverage on Wednesday is scheduled to begin at 7 a.m. (MT).

All the teams endured a six-hour weather delay earlier on Tuesday during the quarterfinal matches.

In addition to Kupcho holding on for victory, teammate Siyun Liu played a critical role down the stretch in getting Wake Forest over the hump. Liu, who eagled the par-4 ninth hole on Monday, closed out her match with a 3-foot birdie on the same hole on Tuesday. She was 1 down with three holes left to Arkansas’ Dylan Kim, but won the 16th and 17th holes and tied the 18th to win 1 up.