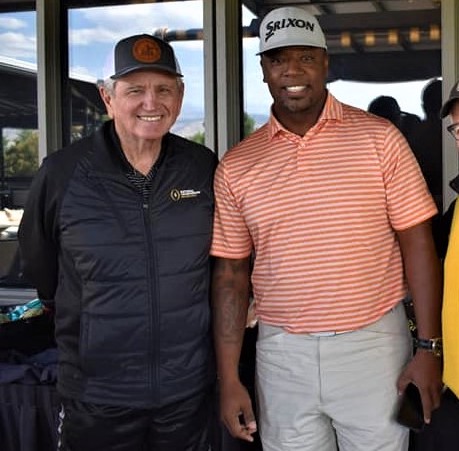 Kordell Stewart apparently loves golf and he’s competed on more than one occasion at the American Century Championship celebrity tournament at Lake Tahoe.

Stewart also has an affinity for Colorado, having been the University of Colorado’s quarterback at the tail end of the Bill McCartney coaching era. He was good enough to have since earned a spot in the CU Athletic Hall of Fame, and his son, Syre, is currently a defensive back for the Buffs.

Now Stewart is bringing together his love for golf and Colorado to form the Kordell Stewart Invitational Pro-Am Golf Tournament, which is expected to make its debut next summer — probably in the July 13-16 range — at a Colorado golf course to be determined.

The charity invitational tournament will bring together roughly 30 athletes/coaches — retired or active — and celebrities that Stewart will invite, to be paired with 30 golf pros with strong Colorado ties and about 60 additional amateurs. A fair number of notable players/coaches from football are expected to participate, given that Stewart played 11 years in the NFL after his CU days, in addition to celebrities from other sports. Stewart himself will be part of the field.

Colorado PGA professional Tom Krause, who’s serving as the tournament chairman, said proceeds from the event — mainly through sponsorships — will benefit the Colorado Golf Foundation and the Boulder County Fellowship of Christian Athletes. The Colorado Golf Foundation “provides funding for Colorado-based golf organizations and programs that use golf to build important life skills and character, with an emphasis on instilling hard work and self-reliance in young people.” Just one example of such a program is the Solich Caddie & Leadership Academy.

Though the 2022 Stewart event is expeced to be a one-day affair, it’s hoped that it may expand in the future.

“This was absolutely Kordell’s idea from the very start,” said Krause, former tournament director of the now-defunct Denver Open. “With his son at CU, Kordell is going to be here a lot more. He loves golf. He’s played in the Tahoe event a couple of times and he wants to do his own event.”

The Colorado tournament will feature separate pro and team purses.

Stewart played at CU from 1991-94 under McCartney, who had just led the Buffs to a national title. Stewart finished his CU career with a Big Eight-record 7,770 yards of total offense and the Buffs went 27-5-1 with him as a starter. He’s perhaps most well known during his CU days for the “Miracle at Michigan” 64-yard touchdown pass to Michael Westbrook in the closing seconds of a 1994 game in which the Buffs toppled the Wolverines.

In the NFL, Stewart played most of his career with the Pittsburgh Steelers, where he was given the nickname “Slash” because he also played some wide receiver. He rushed for 38 touchdowns as an NFL QB and was named the AFC Offensive Player of the Year in 2001.

More information on the Kordell Stewart Invitational Pro-Am will be forthcoming in coming weeks and months.