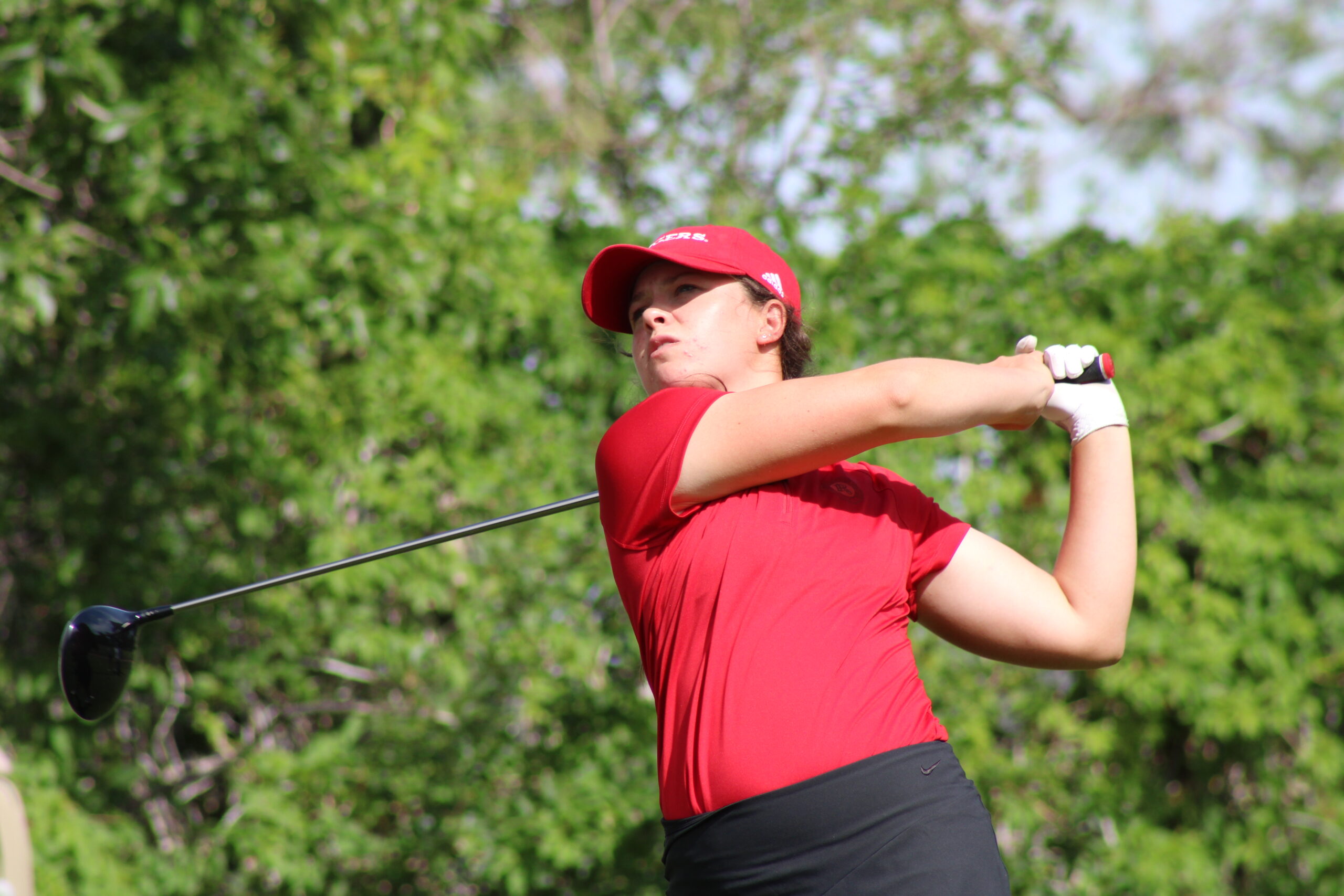 Leigha Devine hits a drive during the Semifinal Match on Friday Afternoon.

Two players from Ptarmigan Country Club — one in each competition — earned spots in Saturday’s 36-hole title matches for the CGA Match Play and the CGA Women’s Match Play, the oldest state golf championships in Colorado.

Rutgers University golfer Leigha Devine will defend her title in the Women’s Match Play, while fellow Ptarmigan member Dillon Stewart, who’s played his college golf at Oklahoma State, will aim for the crown in the men’s Match Play.

Devine has won 11 consecutive matches in the Women’s Match Play dating back to last year — with one of those victories coming via a bye. Earlier on Friday, she cruised to an 8-and-7 win over recent Mullen High School graduate Sofia Choi. Should Devine prevail on Saturday, she’ll be the first back-to-back winner of the Women’s Match Play since Wendy Werley in 1988 and ’89. Last year, Devine swept the two CGA women’s open-age majors, the Match Play and the Stroke Play, becoming just the fourth player since 1990 to do so in a single season.

After winning two matches each on Friday at The Broadmoor in Colorado Springs, Devine will face Morgan Ryan of Valley Country Club for the women’s title, while Dillon will square off with Connor Jones of The Ranch Country Club in the men’s finale.

In the semifinals of the men’s Match Play, Stewart never trailed in posting a 6-and-5 victory over Gavin Hagstrom of Fort Collins Country Club — and Colorado State — in a matchup of two of northern Colorado’s best. And Jones, the 2022 Mountain West Conference individual champion from CSU, rallied after being 1 down to beat Westin Pals of Blackstone Country Club, 2 up. Jones birdied the last two holes of the match — for a tie on 17 and a win on 18. He’s 6-0 in matches this week, including a 20-hole victory over former University of Denver teammate Esteban Missura in Friday’s quarterfinals.

In the Women’s Match Play semifinals, Devine overcame University of Northern Colorado-bound Timbre Shehee of Boulder Country Club, 3 and 2 in a match that was tied after 10 holes. And Ryan, who plays college golf at the University of Wyoming, defeated junior golfer Logan Hale of Erie 2 up after being 3 down through 11 holes. Ryan won No. 17 with a par and 18 with a birdie after being all square through 16, winning her fifth match in five tries this week.

Stewart, who has played the last three seasons at Oklahoma State after being a two-time boys Junior Golf Alliance of Colorado Player of the Year, has five match wins and a tie so far this week in the Match Play. Earlier Friday, he edged Tyler Bishop of Saddleback Golf Club, 1 up, in a quarterfinal in which Stewart never trailed. Stewart, who claimed the individual title in the 2018 Junior America’s Cup and helped Colorado win that team championship, was a quarterfinalist in the Match Play last year.

Earlier in the day, Pals, the 2019 3A state high school champion who now plays for the University of Northern Colorado, ended 2021 champion Cole Nygren’s 11-match winning streak in the Match Play by posting a 3-and-1 victory. Nygren had been hoping to become the first back-to-back winner of the event since Brett Dean in 1990 and ’91.

The winner of the CGA Match Play from 2021 through ’30 receives a medal in honor of 2011 champion Michael Lee, who passed away in late 2020 after battling Covid-19. And a plaque with the names of those champions hangs in the CGA offices.

For all the results, click on CGA MATCH PLAY and CGA WOMEN’S MATCH PLAY.