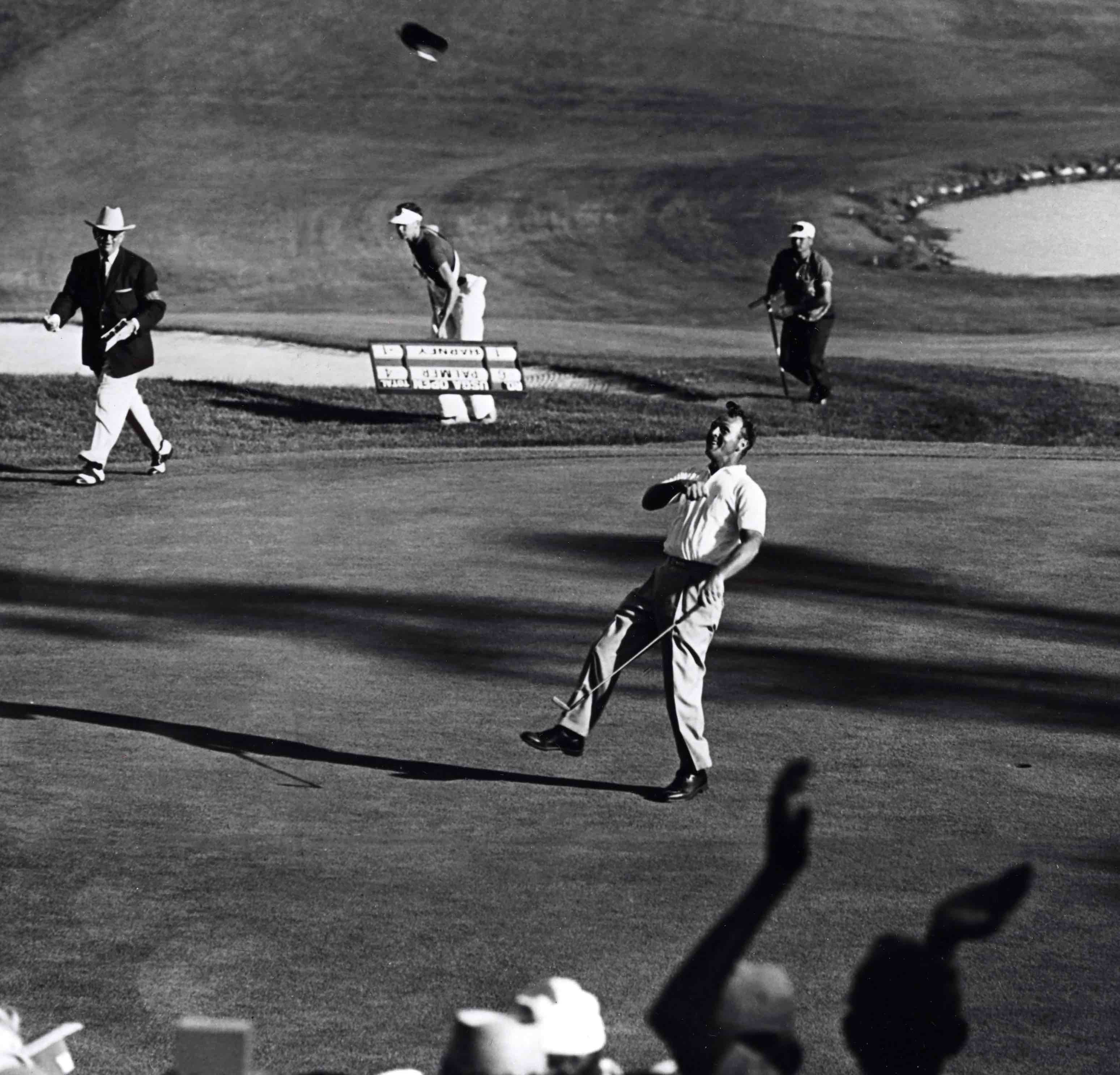 With that in mind, as we begin 2020, it’s worth a historical look at the events and people celebrating major anniversaries and birthdays this year related to Colorado golf. (Note: The events list is limited to those held in the Centennial State.)

— The prestigious Trans-Mississippi Championship was held in Colorado for the first time — out of 16 times overall — in Colorado. Harry Legg claimed the title at Denver Country Club.

— The Broadmoor Golf Club in Colorado Springs hosts the Trans-Miss for the second time — out of the club’s six overall. This time, Robert McCrary prevailed for the second straight year.

— Hale Irwin, the most famous golfer to have grown up in Colorado, will celebrate his 75th birthday on June 3. The Boulder High School and University of Colorado graduate won an NCAA individual title at CU, and claimed 20 victories on the PGA Tour (including three U.S. Opens) and a record 45 on PGA Tour Champions. He was inducted into the World Golf Hall of Fame in 1992.

— The Women’s Western Open — an LPGA major at the time — was held at Cherry Hills Country Club and was won by now-World Golf Hall of Famer Babe Zaharias, who lived in the Denver area during part of the 1940s. Zaharias, named the top women’s athlete of the first half of the 20th century by the Associated Press, defeated Peggy Kirk in the match play final. Zaharias would win eight LPGA events in 1950 alone, including her fourth Women’s Western Open. Zaharias was one of the founders of the LPGA and was part of the inaugural class of the Colorado Golf Hall of Fame, being inducted posthumously in 1973. The Women’s Western Open was just the ninth event following the launch of the LPGA Tour in January of 1950.

— Denver Country Club hosted just the third USGA championship ever held in Colorado — following the 1938 U.S. Open (Cherry Hills) and the 1946 U.S. Amateur Public Links (Wellshire) — as the U.S. Junior Amateur came to town. In just the third U.S. Junior Am ever held, Mason Rudolph prevailed. Rudolph would go on to win five times on the PGA Tour.

— A U.S. Open that was dubbed one of the greatest ever produced Arnold Palmer’s only victory in the event as he rallied from seven strokes down going into the final round with a 65 to prevail at Cherry Hills Country Club, driving the green on the 346-yard first hole in the process. Three generations of all-time golf greats were in contention as 20-year-old amateur Jack Nicklaus finished second and 47-year-old Ben Hogan, who had hit his first 34 greens in regulation that day, finished bogey-triple bogey to place ninth. Of course, Palmer punctuating his victory with his visor toss on the 18th green (pictured at top in USGA photo) will be part of golf history forever.

— The Broadmoor Ladies Invitation, one of the top women’s amateur tournaments in the world, was won for the third time in four years by Judy Bell, who long has called The Broadmoor home. Bell would go on to become the first female president of the USGA and be inducted into the World Golf Hall of Fame.

— Five times from 1953 through ’69, The Broadmoor hosted the men’s NCAA Division I national championship. In 1960, the University of Houston won the team title with Dick Crawford from UH claiming the individual crown.

— From 1960 through 2001, The Broadmoor hosted the World Seniors Golf Championship, with past U.S. Open and U.S. Amateur champion Chick Evans being one of the driving forces behind the creation of the tournament.

— Denver native Jonathan Kaye, winner of two PGA Tour events and two Colorado Opens, turns 50 on Aug. 2. While playing golf at the University of Colorado, Kaye once defeated Phil Mickelson — already a PGA Tour winner — in a playoff to claim a college title. Kaye lives in Boulder during the summer months.

— Shane Bertsch, winner of three Korn Ferry Tour events, a Colorado Open and more than $2.5 million on the PGA Tour, also turns 50 this year — in his case on March 30. Bertsch was recently medalist in the final stage of PGA Tour Champions Q-school.`

— Denver resident Will Nicholson Jr., became just the second Coloradan to be elected USGA president. He served in that role in 1980 and ’81. (Note: Frank Woodard of Denver was the first Colorado resident to be USGA president — in 1915-16.)

— Kevin Stadler, winner of the 2014 Waste Management Phoenix Open on the PGA Tour along with a Colorado Open and two CGA Match Play Championships, turns 40 on Feb. 5. Stadler is a part-time resident of Denver.

— Coloradan Gregg Jones finished runner-up at the prestigious Trans-Miss, which was won at Denver Country Club by Raymond Barr.

— Phil Mickelson, now a World Golf Hall of Famer, won his only USGA title to date, claiming the U.S. Amateur championship at Cherry Hills. Mickelson defeated high school teammate Manny Zerman 5 and 4 in the scheduled 36-hole final. Mickelson prevailed just a few months after winning the second of his three NCAA individual titles. A month after his U.S. Am win, Mickelson returned to Colorado to claim the title in the University of Colorado-Fox Acres Invitational.

— In the fifth International PGA Tour event held at Castle Pines Golf Club, now-World Golf Hall of Famer Davis Love III posted his first tour victory since the death of his dad, Davis Jr., in a plane crash in November 1988. Davis Love Jr. won the CGA Junior Match Play twice in the 1950s. Dru Love, son of The International winner, won the CoBank Colorado Open in 2018. Two players chalked up 8-point double eagles in the final round of the 1990 International — Steve Pate and Jim Gallagher Jr.

— The 1990 Jerry Ford Invitational in Vail was the first one which produced tri-champions — Andy North (winner of the 1978 U.S. Open at Cherry Hills), defending champ Donnie Hammond and Jim Gallagher Jr.

— Another USGA championship — in addition to the U.S. Amateur — was held in Colorado in 1990 as Cathy Mockett won the U.S. Women’s Amateur Public Links at Hyland Hills Golf Course in Westminster.

— Annika Sorenstam, now a World Golf Hall of Famer, jumped into the big time by winning the U.S. Women’s Open at the East Course at The Broadmoor in Colorado Springs. It was the first of Sorenstam’s 72 LPGA Tour victories, 10 major titles and three U.S. Women’s Open titles. She shot a final-round 68 after being five back going into the last day to edge 1991 champion Meg Mallon. All of the top four finishers are now in the World Golf Hall of Fame — Sorenstam, Mallon, Betsy King and Pat Bradley. It was the 50th U.S. Women’s Open and the first one held in the Mountain time zone or to feature a $1 million purse.

— Lee Janzen, who would win two U.S. Opens in the 1990s, claimed the title at The International at Castle Pines Golf Club. Janzen drained a 6-foot birdie putt on the final hole to beat Ernie Els by one point. It was the third victory of 1995 for Janzen, who nevertheless was bypassed for the U.S. Ryder Cup team that year.

— In the second-to-last Jerry Ford Invitational ever held in Vail, Doug Tewell prevailed. The next year marked the 20th and final JFI, which featured PGA Tour players and celebrities of all sorts.

— Ernie Els, whose first made cut on the PGA Tour came at The International in 1991, won the 2000 International Presented by Qwest at Castle Pines Golf Club. Els scored a record-tying 48 points for four rounds, beating the other record holder, Phil Mickelson, by four points. Greg Norman placed fourth.

— The Girls Junior Americas Cup was held for the second time in Colorado, with both being hosted by Eisenhower Golf Club at the Air Force Academy. Mexico swept the team and individual (Violeta Retamoza) titles.

— In the first major national/international event held at Colorado Golf Club in Parker, Tom Lehman, then in his first full season on PGA Tour Champions, claimed the title. He prevailed in a playoff over Fred Couples and David Frost, who both double bogeyed the first extra hole. It was the first individual senior title for Lehman, who hadn’t won on the PGA Tour since 2000. Couples made back-to-back eagles On Nos. 15 and 16 in the final round.