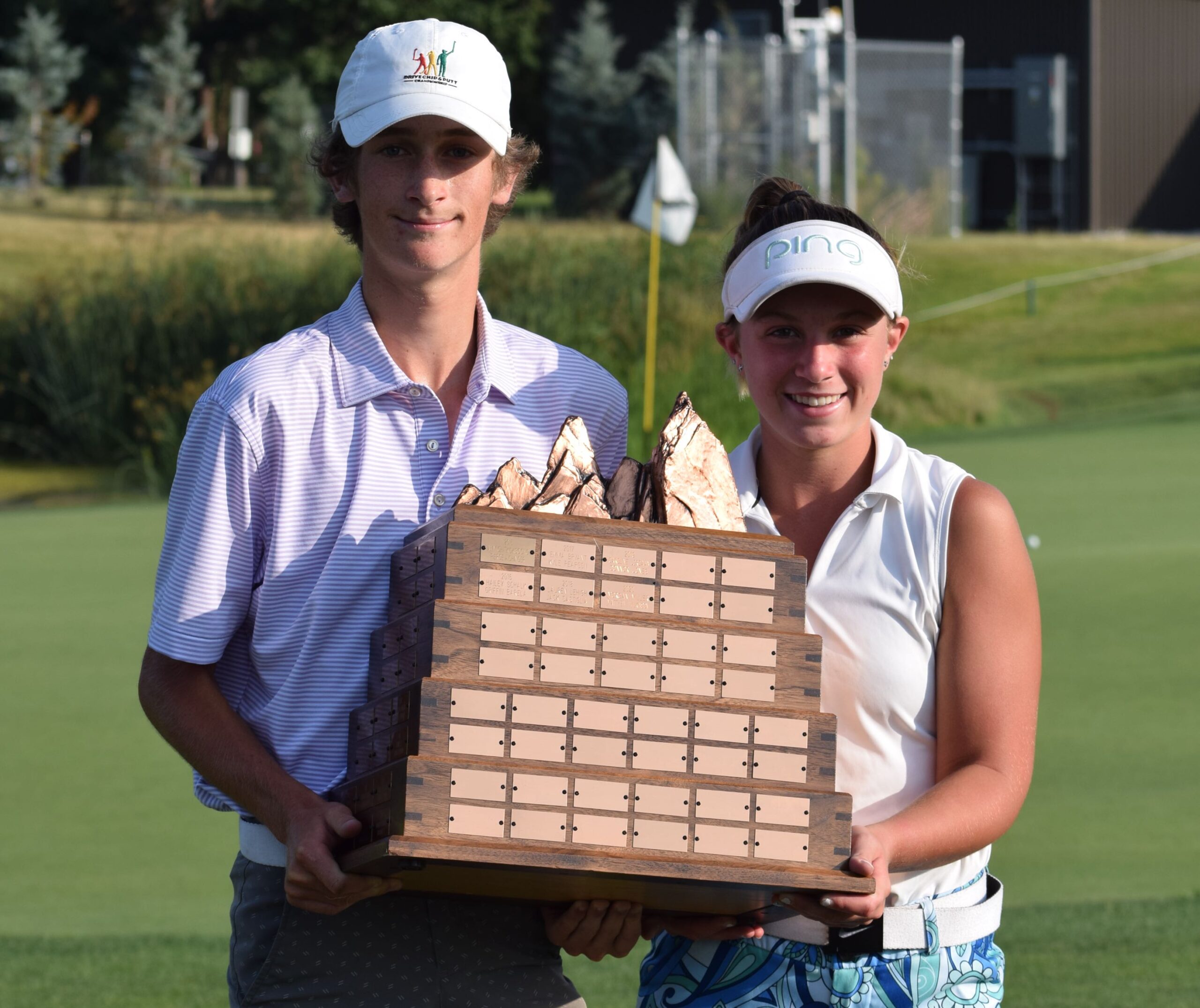 Ben Harding of Longmont and Texan Morgan Miller had memorable runs to the title at City Park Golf Course.

It seemed only fitting that the Colorado Junior Match Play title matches would end in unique ways given that they were conducted in unique fashion.

It’s very likely that Wednesday marked the first time that the boys and girls finalists competed for the Colorado Junior Match Play titles while in the same foursome.

And, in keeping with the distinctive nature of the finals, both champions had to rally from significant deficits to prevail. And the boys winner ended his match in extra holes by pitching in for birdie from 45 feet at City Park Golf Course in Denver.

Ben Harding of Longmont, who had never won a Junior Golf Alliance of Colorado Tour event, much less a JGAC major, took care of both issues by holing out from 15 yards for birdie on the first extra hole to defeat Jordan Jennings of Montrose, who had led the match 2 up with three holes left in regulation. And it should be noted that Jennings very nearly drained his bunker shot for birdie on the 19th hole after Harding had made his, Jennings’ ball finishing just 6 inches short of the cup.

And on the girls side, Morgan Miller of Cedar Park, Texas, who recently verbally committed to play her college golf at the University of Colorado, won the title for the second straight year, marking the first time that’s happened in the Colorado Junior Match Play since Somin Lee went back to back in 2008-09. This time, Miller defeated Grace Young of Highlands Ranch, 3 and 2, in the finale.

For Harding, a 16-year-old junior-to-be at Silver Creek High School, his reaction to pitching in to win the title was relief as much as anything. After all, he had played 69 holes of competitive golf — all walking while carrying his bag in very hot conditions — over the course of two days.

“I was just happy it was over, I guess,” said the player from Twin Peaks Golf Course. “It’s been a lot of golf in two days. I was kind of lucky I didn’t have to play on Monday because my (first-round) opponent didn’t show up. So I had a nice rest day. I’ve played 120-some holes in a week (having qualified for the Junior Match Play on Thursday, then competing in the Longmont men’s city amateur Friday, Saturday and Sunday), so I’m a little tired. But it’s been a lot of fun.

“My chipping has been a little spotty the last couple of days, but I was kind of thinking (on the pivotal pitch), ‘Make it.’ It was not a very hard shot. It was just sort of land it on the green and let it roll to the hole. I thought if it broke a little left it had a chance. I felt pretty good about it.”

In a match that had been tied or 1 up or 1 down the entire afternoon, Jennings went 2 up with three holes left in regulation when he drove it past pin high on the 327-yard sixth hole (the 15th of the match) then made a 6-foot birdie putt.

But Harding would put together a stellar stretch run to prevail, making birdies on the 16th, 18th and 19th holes, with both players bogeying their 17th hole. On their 16th, Harding drained a 7-foot birdie after Jennings had missed an 8-footer. Then on their 18th, Harding extended the match with a 7-foot birdie. And on the first extra hole, the par-4 first, Harding sank his 15-yard birdie pitch from left of the green, then had to watch as Jennings’ bunker shot ended up 6 inches short of the cup.

For Jennings, the 4A boys state high school champion from Montrose who will play his college golf at Colorado State, it was a heartbreaking end to his JGAC career — though he handled it with grace.

“It was a great match,” Jennings said. “We were all square for almost the entire match. … All congrats to him. I’m super proud for him. He’s got a lot of potential. He’s going to be very good. The sky is the limit for him.

“It’s been a long week and there’s a lot of positives I can take out of this week. It wasn’t the way I wanted it to end, but I came into this week not playing my best golf and I think I got a lot of confidence out of this week. I’m going to build off that. That’s about all I can do.”

Meanwhile, as noted, Harding won his first JGAC major before he captured a title in a regular JGAC Tour event. And on Wednesday, he not only went 19 holes in the finals, but beat Jackson Rottschafer of Centennial 1 up in the morning semifinals.

“It means a lot (to claim the championship). It’s cool. There’s a lot of great kids that play JGAC,” said Harding, who thanked his longtime Longmont-based PGA instructor, Keith Martin, for helping put him in this position.

“I think this (victory) speaks more highly to grit than skill. I don’t feel like I played amazing today or yesterday, but I feel like I did a really good job fighting and I managed my game. I didn’t have my best stuff but I figured it out over a very long course of golf.”

Meanwhile, on the girls side, Miller capitalized on her summer trip to Colorado for the second straight year to claim the Junior Match Play title.

“That’s why I came here. I wanted to win back to back,” the 17-year-old senior-to-be said. “I knew it was going to be tough because all these girls are good. I just took it one match at a time. I had a bye the first day (as one of the top seeds), so that saved some energy. That’s what did it.

“Both of these wins are at the top (of her golf accomplishments). I’ve won a couple things in Texas, but these are two majors and I would put these at the top definitely.”

But in the final against Young — a Valor Christian graduate who will play her college golf at Rhodes College in Memphis — the defending champ found herself 2 down after five holes. But the CU-bound Texan kept an even keel, knowing how much golf was yet to be played.

“Yesterday I was 2 down in a match (also), but I knew there was 18 to play and I was through 5,” she said. “The mental part really helped me because I knew there were a lot more holes to play.”

Young was 1 up at the turn after sinking a 5-foot birdie putt on the ninth hole (No. 18 at City Park GC). But the back nine of the match would belong to Miller as she won the 10th, 11th, 13th and 15th holes as Young started missing greens, with her pitch shots not bailing her out.

“To be honest, I was just very tired,” the 17-year-old Young said. “It just got in my head a little bit. But honestly I’m not mad about it. I played well. Congratulations to Morgan.

“I knew she probably had a decent chance at beating me, but I was going to give it the best shot I could. I’m happy with how I played even though I didn’t win.”

For Miller, while she’s visited Colorado each of the last two summers to get in some competition and escape the Texas heat, she’s looking forward to making more memories in Colorado in the future, now that she’s committed to playing her college golf at CU starting in a year.

“I’m so excited,” she said. “I’m ready to win a national championship. All the girls and coaches are super nice. I’m looking forward to it.”

At City Park GC in Denver