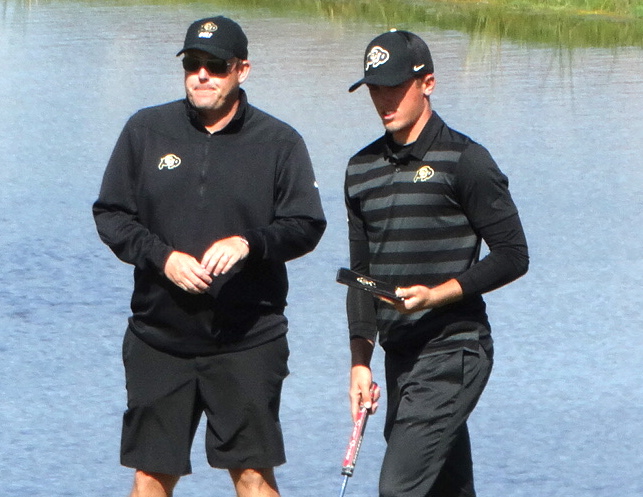 Trevor Olkowski certainly seems to thrive in the Troon Saguaro Amateur Series events co-founded by his head coach at the University of Colorado, Roy Edwards.

After posting finishes of ninth and fifth place in Series events over the last seven months, the CU sophomore on Friday won the 112-player Saguaro Amateur at Ak-Chin Southern Dunes Golf Club in Maricopa, Ariz.

Olkowski, a former Grand Junction resident who now lives in Las Vegas, carded rounds of 71-67-70 for an 8-under-par 208 total, good for a one-stroke victory over Sean Carlon of Albuquerque, N.M. In the final round, Olkowski made five birdies, giving him 16 for the three rounds. (Olkowski is pictured at left with Edwards in September at the Mark Simpson Colorado Invitational, where the sophomore tied for first place but lost in a playoff.)

Olkowski was one of three players who grew up in Colorado to post top-10 finishes in the Saguaro Amateur on Friday. Jake Staiano of Cherry Hills Village, a senior at Colorado State, and Tyler Severin of Johnstown, a University of Wyoming freshman, tied for fourth place. Staiano, the 2017 CGA Les Fowler Player of the Year, went 73-69-71 for a 3-under-par 213 total. He birdied two of his last three holes. Severin carded scores of 70-73-70 for his 213. He made the top five despite a 42 on the front nine on Thursday.

For all the scores from the Saguaro Amateur, CLICK HERE.