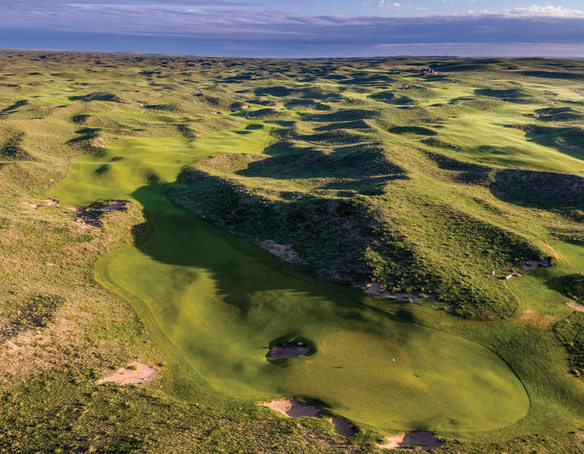 Just about every major national golf publication does course rankings of one sort or another these days.

There are general course rankings — nationally, internationally and by state — as well as ones for modern courses, classic courses, residential courses, resort courses, “courses you can play”, military courses, real money casino courses, courses in Mexico and the Caribbean … The lists go on and on.

But it wasn’t always so.

It was Golf Digest that got things rolling in a big way on the course ranking front. Since 1966, the publication has compiled a biennial ranking of “America’s 100 Greatest Golf Courses”, which is the self-proclaimed “gold standard in the golf community.”

With two years since its last rankings, Golf Digest last week published its 2019-20 edition of America’s 100 Greatest. And Colorado was well-represented, with two courses in the top 50 and three in the top 75.

As for Colorado-based courses, Ballyneal (above) in Holyoke checked in at No. 46, Castle Pines Golf Club in Castle Rock at No. 48, and Cherry Hills Country Club in Cherry Hills Village at No. 72. Here a short rundown on each:

46. Ballyneal in Holyoke — The minimalist Tom Doak design, which opened in 2006, has reached its highest point in the Golf Digest rankings, having been 50th two years ago. It’s been included among the America’s 100 Greatest since 2011.

Here’s Golf Digest’s take on Ballyneal: “If No. 9 Sand Hills Golf Club stands for the notion that there’s nothing more glorious than a round of golf beyond the range of cell phone reception, then Ballyneal (Tom Doak’s northeast Colorado answer to Nebraska’s Sand Hills) proves that isolated golf is even better when Spartan in nature. With no carts

and with dry, tan fescue turf on fairways and greens, Ballyneal is even more austere than Sand Hills. It provides absolutely firm and fast conditions, and with many greens perched on hilltops, the effect of wind on putts must be considered. Other than No. 15 Friar’s Head, Ballyneal is the only course to have constantly risen in our rankings over the past 10 years.”

Here’s Golf Digest’s take on Castle Pines: “When Golf Digest began its annual Best New Course awards in 1983, the review panel selected Castle Pines as the Private Course winner, but Bill Davis, co-founder of Golf Digest and founding father of all its course rankings, didn’t care for the course and vetoed its inclusion. So no private course was honored that year. Davis soon recognized his error, and in 1987 — its first year of eligibility — Castle Pines joined America’s 100 Greatest and has remained there ever since. Club founder Jack Vickers, a Midwest oilman, had urged architect Jack Nicklaus to produce a mountain-venue design worthy of a major championship. Jack did, but when a championship never resulted, Vickers established his own, The International, which for many years was the only PGA Tour event played under a unique Stableford format. It’s a pity that The International is no longer on the Tour’s schedule.”

Here’s Golf Digest’s take on Cherry Hills: “When Cherry Hills opened in the early 1920s, it was a ground-breaking design, with the nation’s first par-5 island green and closing back-to-back par-5s, although in championship play the 18th is played as a par-4. In the 1960 U.S. Open, winner Arnold Palmer popularized the idea of a drivable par 4 by going for the first green in every round. Curiously, when Palmer and partner Ed Seay remodeled Cherry Hills in 1976, they lengthened the first hole so no player could duplicate Arnie’s feat. Nearly 40 years later, modern equipment has once again made the first hole reachable from the tee.”

Meanwhile, another ranking was also recently published, with Golf Advisor listing its top 50 golf courses in the U.S., determined by ratings and reviews received by Golf Advisor in 2018.

One Colorado course made the grade, with Pole Creek Golf Club in Tabernash slotted in at No. 44.

Golf Advisor’s top course for the rankings was the Black Course at Bethpage State Park in Farmingdale, N.Y.