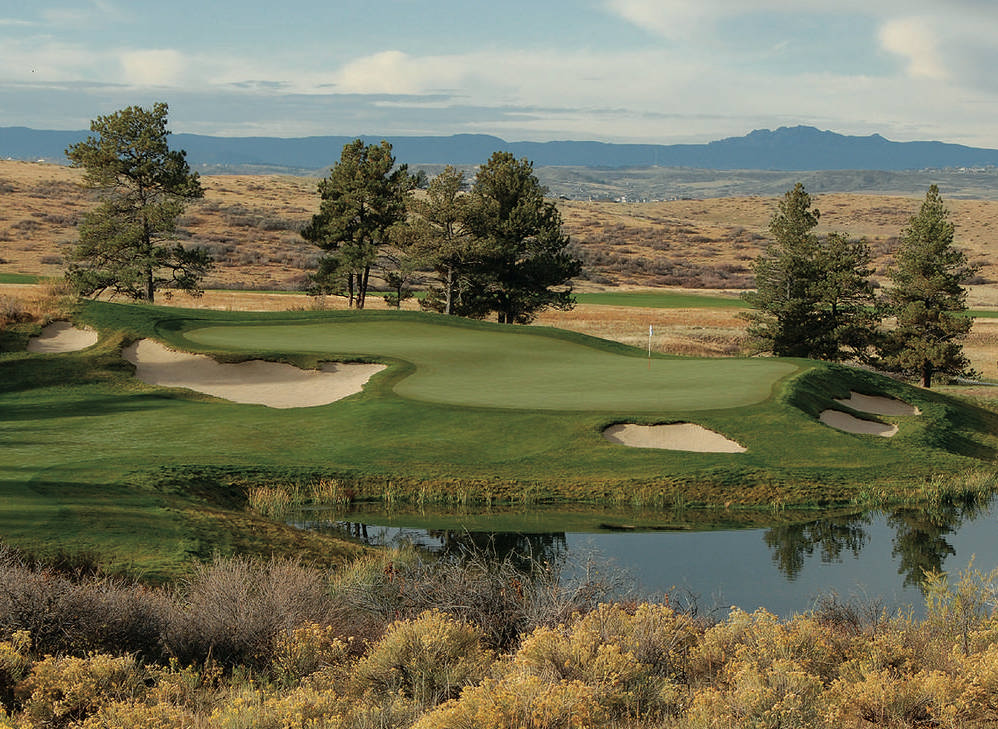 Such is the outlook as Colorado golf enters 2019 with more than the usual amount of major happenings to look forward to in the Centennial State.

Let’s hit some of the highlights:

— U.S. Mid-Amateur: For just the second time ever and the first since 1983 — when Cherry Hills Country Club hosted the proceedings and Jay Sigel added the U.S. Mid-Amateur title to the U.S. Amateur victory he had posted 32 days earlier — Colorado will host the national championship for amateurs 25 and older.

This time, Colorado Golf Club (left) in Parker will be the primary championship site for the 264-player event, which will run Sept. 14-19. Aurora-based CommonGround Golf Course, which is owned and operated by the CGA, will serve as the second host facility for the stroke-play portion of the event Sept. 14-15. CommonGround did likewise for the 2012 U.S. Amateur that Cherry Hills hosted.

It will be the latest feather in the cap of Colorado Golf Club in terms of hosting big-time tournaments. It’s previously been the site of the 2010 Senior PGA Championship and the 2013 Solheim Cup. Bill Coore and two-time Masters champion Ben Crenshaw designed Colorado Golf Club, which opened in 2007.

Besides the national title being on the line, the winner of the U.S. Mid-Am will receive a berth in the 2020 U.S. Open at Winged Foot Golf Club in New York — and likely the 2020 Masters.

With the national championship coming to Colorado, the state will host two qualifying tournaments instead of the usual one for the event: Aug. 13 at the Omni Interlocken Golf Club in Broomfield and Aug. 19 at Inverness Golf Club in Englewood.

Admission to the U.S. Mid-Amateur will be free.

The tournament, the first of at least five Web.com Tour events scheduled for TPC Colorado, will be mark the first visit to Colorado by the PGA Tour’s feeder circuit since 1997, when the second of two Nike Colorado Classics was held at Riverdale’s Dunes Course in Brighton. Stewart Cink, who has since won six times on the PGA Tour including the 2009 British Open, prevailed in the 1996 event at the Dunes.

The 2019 TPC Colorado Championship will feature a $600,000 purse and a 156-person field. Monday qualifying tournaments are set for Riverdale Dunes and Highlands Meadows Golf Course in Windsor on July 8.

— Return of City Park Golf Course: Sometime this year, after being closed for two years for a course redesign and construction project, a new-look City Park Golf Course (left) in Denver is scheduled to reopen. The return is no small matter given that City Park GC dates back to 1912 and has a strong regular clientele.

Todd  Schoeder and his Broomfield-based iCon Golf Studio teamed with design advisor — and three-time U.S. Open champion — Hale Irwin in the course redesign for the site, which will integrate stormwater detention areas to help protect some of the city’s most at-risk neighborhoods from flooding.

When the redesign project is complete, the site will feature the new 18-hole par-71 golf course, a full-size driving range, a dedicated four-hole course for The First Tee of Denver, a new clubhouse and maintenance facility, stormwater detention, and a reforestation program with a net gain of 500 trees.

Another course alongside Colorado Blvd., also is closed for stormwater detention management reasons — that being Park Hill Golf Club. That course will be shuttered for all of 2019, and likely beyond.

— Comeback for Cornerstone: It was several years ago at a CGA senior championship that a member at Cornerstone, the Greg Norman-designed course in the high country near Montrose, said that there were plans to reopen the club, which stopped operating in 2012. And while it took a few years, it appears as if that member was correct.

The highly acclaimed private course is undergoing a renovation — at the hands of Matt Dusenberry and Dusenberry Golf Course Design — with plans to reopen in the summer of this year.

Cornerstone originally operated from 2008 through ’12.

— Colorado’s Second Topgolf: Since August 2015, there’s been one Topgolf location in Colorado — the one in Centennial. But three-plus months ago, ground was broken at a second site — at I-25 and 60th Ave., in Thornton. The 65,000-square-foot, three-level facility is scheduled to open to the public in late 2019. It will have 102 climate-controlled hitting bays — where players hit microchipped golf balls at targets with varying point values — in addition to a restaurant and three bars. There will be 250 HD televisions, a rooftop terrace with fire pits and 3,000 square feet of space devoted to private events. The Centennial Topgolf employs about 500 people, the same number that is expected in Thornton.

— Playing by the (New) Rules: The new Rules of Golf, part of a rules modernization project long in the works, took effect with the new year. But for those who don’t play golf outside of Colorado, there’s still some time to get up to date on the changes given that the first tournaments of the year are months away and that scores from Colorado courses can’t be posted for handicap purposes until March 15.

Whether it be putting with the flagstick left in or dropping from knee height, the CGA did a good job during recent months with a video series highlighting the key changes. To watch, CLICK HERE.

— The Old Switcheroo: For the second time in six years, the dates of the CoBank Colorado Women’s Open and the Colorado Senior Open at Green Valley Ranch Golf Club have been swapped, so that now the women are back around Memorial Day — as they were in 2012 and earlier — and the seniors return to around Labor Day.

Specifically, the Women’s Open is set for May 29-31 and the Senior Open for Aug. 28-30. (The CoBank Colorado Open remains in its same basic slot, with this year’s event planned for July 25-28.)

As Kevin Laura, CEO of the CoBank Colorado Open Championships, said in an email early last month, “We wanted to strengthen the field of our Women’s Open championship by going against the U.S. Women’s Open so that we can pull players from the LPGA and Symetra tours (the latter is expected to have an off week that week).

“Our purse ($150,000) and especially first place ($50,000) should entice players to compete who have not otherwise been able to do so while we were against an LPGA and Symetra event.”

As for the Colorado Senior Open, it’s very possible the date switch will cost the event a possibility at its top draw from a fan and media standpoint. Pro Football Hall of Famer John Elway has played in the tournament four times (2010, ’14, ’16 and ’18) — in addition to the Colorado Open four times. But given that the new dates for the Senior Open are now roughly a week before the start of the NFL regular season, and that Elway is the Denver Broncos general manager, it seems highly unlikely that he’ll compete at Green Valley Ranch in 2019.

— CGA Majors: The CGA will return to some familiar courses for its two men’s “major championships” in 2019. The 119th Match Play is set for June 17-21 at The Club at Rolling Hills in Golden, which hosted the event in 2012 as well as 1997, ’88 and ’79. And Aug. 8-11 the CGA Amateur returns to the recently renovated course at Lakewood Country Club, the site for the championship four times just since 1999 — and numerous times prior — with 2014 being its last time as the host.

On the women’s side, the two majors will be played at venues which are hosting their respective events for the first time. The CGA Women’s Stroke Play is scheduled for June 17-19 at Murphy Creek Golf Course in Aurora, where the 2008 U.S. Amateur Public Links was contested. And the 104th CGA Women’s Match Play is set for July 9-11 at The Club at Ravenna in Littleton, which was the site of the men’s CGA Match Play the past two years.

Colorado Golf Hall of Famer Kim Eaton, who has matched Carol Flenniken’s record for CGA/CWGA women’s championship titles with 25, would grab the record outright with her next victory in one of the CGA events.

— USGA Qualifiers: A total of 18 qualifying tournaments for USGA national championships are scheduled in Colorado in 2019. Here’s the rundown on the men’s side:

* U.S. Open Locals: May 7 at Collindale in Fort Collins; May 9 at CommonGround in Aurora; and May 13 at Walnut Creek in Westminster.

* U.S. Mid-Amateur: Aug. 13 at Omni Interlocken in Broomfield and Aug. 19 at Inverness in Englewood.

And here’s the lineup for women’s USGA qualifiers:

* U.S. Women’s Open: May 6 at Walnut Creek in Westminster.

* U.S. Women’s Amateur Four-Ball: Sept. 30 at The Ranch in Westminster.

— Junior Tournaments: While the Junior Golf Alliance of Colorado schedule is still being set in stone, the biggest junior tournament in Colorado for 2019 is finalized as the AJGA Hale Irwin Colorado Junior is scheduled for June 3-6 at Walnut Creek Golf Preserve in Westminster. It will be the fifth year for the event, with Walnut Creek serving as host for the third straight season.

The girls state high school tournaments this spring are set for May 20-21 at Harmony Club in Timnath (5A), Pelican Lakes in Windsor (4A) and Eagle Ranch in Eagle (3A).

And, after an off year, the CGA amateurs and the Colorado PGA professionals will square off for the Colorado Cup Matches on Oct. 16 at the West Course at The Broadmoor in Colorado Springs.

— Winter Events: Meanwhile, one of the first major Colorado golf events of the year will take place in about a month as the Denver Golf Expo returns to the Denver Mart (I-25 and 58th Ave.) Feb. 8-10. Typically, the three-day show attracts close to 10,000 people. Last year, the Expo celebrated its 25th anniversary.

The CGA Women’s Golf Summit, traditionally known as the Annual Meeting, will take place on March 9 at Pinehurst in south Denver.