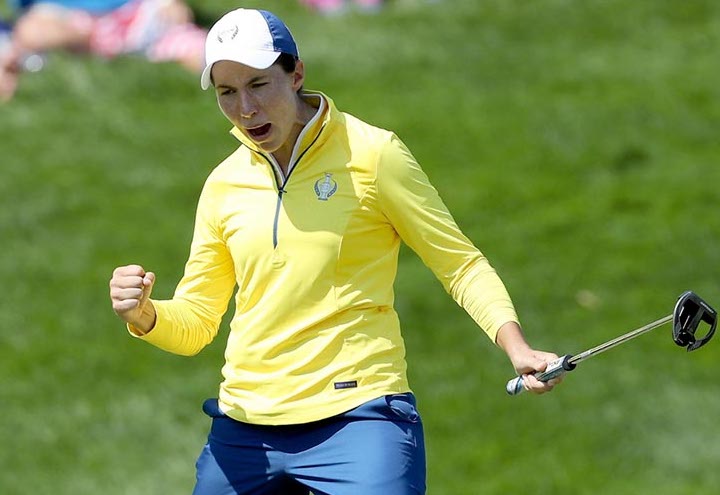 It’s somewhat ironic, but schedule disruptions at the highest level of women’s golf has led to the CoBank Colorado Women’s Open drawing one of its strongest fields ever.

The way things originally stood, the CWO would have been held the same week as the U.S. Women’s Open, meaning that the very best female players in the world would have been in Houston next week, rather than some of them competing at Green Valley Ranch Golf Club in northeast Denver.

But with the U.S. Women’s Open having been postponed to December due to the effects of COVID-19, now at least a couple of the world’s top 50 women’s golfers will be playing in Colorado June 3-5.

That includes Spaniard Carlota Ciganda, a two-time winner on the LPGA Tour and the No. 15-ranked women’s golfer in the world.

With the LPGA Tour not resuming its season until late July, Ciganda entered the Colorado Women’s Open this week, joining fellow current — or former — LPGA regulars such as Colorado native Jennifer Kupcho; Becca Huffer of Monument (twice a winner of the CWO, including last year); Jenny Coleman (a former University of Colorado golfer); Vicky Hurst (who has won more than $1.6 million on the LPGA circuit); 2020 LPGA rookies Jillian Hollis (who qualified in Colorado for the 2018 U.S. Women’s Open) and Haley Moore; former CWO champ Kendall Dye; Clariss Guce, Kim Kaufman and German Sophia Popov, who on Wednesday claimed her third Cactus Tour title in 2020.

Kupcho, a former Westminster resident who won the inaugural Augusta National Women’s Amateur last year, sits at No. 50 in the women’s world rankings.

Ciganda, who will turn 30 on Monday, is no stranger to Colorado, having represented Europe in the Solheim Cup at Colorado Golf Club in Parker in 2013. It should be noted that that was the first time Europe won the Solheim Cup on U.S. soil. Ciganda went 3-0-0 individually that week.

Both of Ciganda’s victories on the LPGA Tour came in a one-month span in 2016. She’s won more than $5.3 million in her LPGA career, and last year, she posted top-10 finishes in three of the five LPGA majors. She’s also won four times on the Ladies European Tour.

And in the last three months, Ciganda has won twice on The Cactus Tour.

Unfortunately, as good as the Colorado Women’s Open field is, few people will be on hand to watch the action next week as the tournament is closed to the general public due to ongoing safety concerns related to the novel coronavirus.