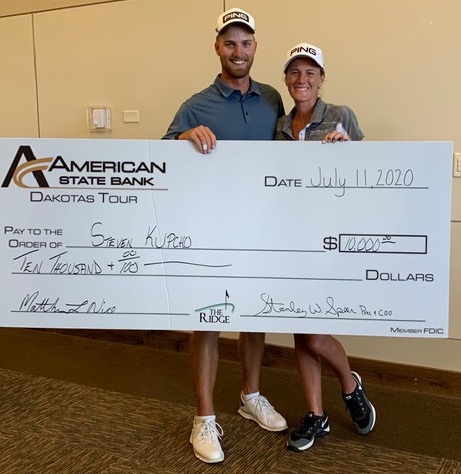 Married life apparently agrees with Steven Kupcho, the pro golfer who grew up in Westminster.

The former CGA Player of the Year got married on July 2, and nine days later — on Saturday — he notched his second pro victory in multi-day tournaments, with his wife Jenny on hand this time.

Kupcho, a former University of Northern Colorado golfer and the older brother of LPGA Tour regular Jennifer Kupcho, earned the victory at The Dakotas Tour’s At the Ridge event in Sioux Center, Iowa. He did so after a stellar last two days, when he went 63-62, with the latter being Kupcho’s low tournament score ever.

Kupcho’s 16-under-par 197 total left him in a three-way tie for first place at the end of regulation. He then played off with Andrew McCain of Knoxville, Tenn., and Alex Scott of Traverse City, Mich. And the Coloradan won thanks to a birdie on the first playoff hole, earning $10,000 in the process.

On Saturday in regulation, Kupcho made nine birdies in a bogey-free round, carding four in a row starting on No. 14. Over the final two rounds, he carded 17 birdies and no bogeys.

Daniel Sutton, an Englishman who now lives in Denver, tied for fourth place on Saturday, a shot out of the playoff, after going 66-63-69. Former CGA Amateur champion Kyler Dunkle was eighth at 199 (70-63-66).

On Wednesday, Sutton landed his first multi-day victory as a pro at a Dakotas Tour event in Yankton, S.D., with $11,000 being the winner’s check. Sutton went 66-68-67 for a 15-under-par 201 total and won a three-man playoff. One of the players who tied for second was former University of Denver golfer Chris Gilman (68-65-68). Former University of Colorado player Kevin Kring was fourth (69-69-64).

— Italian golfer Anna Zanusso, who claimed two individual titles in her freshman season for the University of Denver, finished runner-up on Saturday in the Italian Ladies’ Match Play Championship in Lignano Sabbiadoro, Italy.

Zanusso fell in the title match 4 and 3 to champion Carolina Melgrati of Milan, who built a 5-up lead through eight holes.

Zanusso owns a share of the lowest women’s NCAA tournament single-round score ever (an 11-under-par 61), The 20-year-old is No. 67 in the women’s World Amateur Golf Rankings.

Zanusso will be in the field for the U.S. Women’s Amateur Aug. 3-9 in Rockville, Md.

— Former University of Colorado golfer Brittany Fan finished fifth out of 16 players on Friday at The Cactus Tour event in Scottsdale, Ariz.