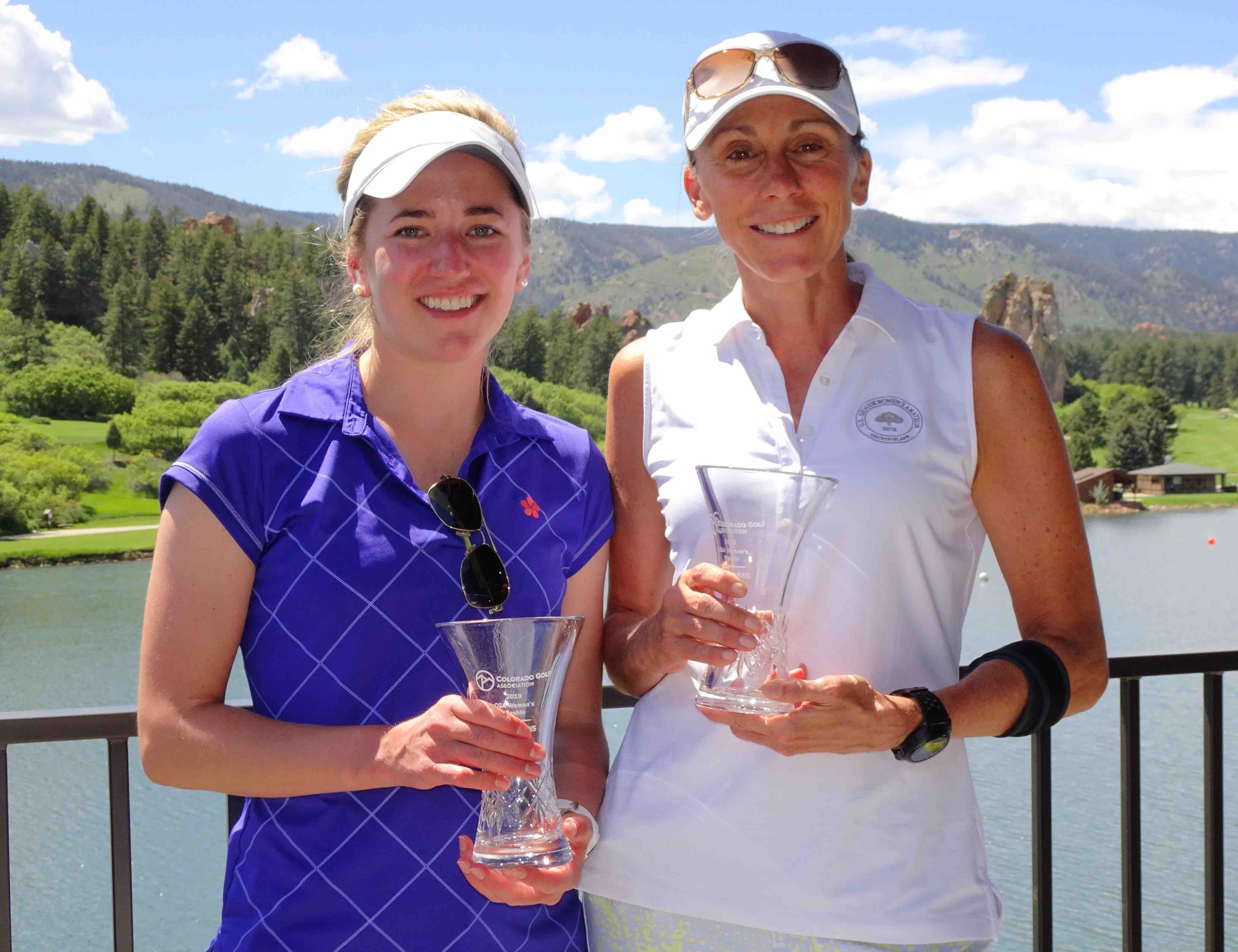 The CGA Women’s Mashie tournament was what first brought Tiffany Maurycy and Holly Schaefer together, and on Thursday it brought them a state championship.

Maurycy, from Cherry Creek Country Club, and Schaefer, from Columbine Country Club, met at the Mashie last year thanks to an introduction by Colorado Golf Hall of Famer Janet Moore.

Though they lost in the semifinals of the 2018 event to the eventual champions, Maurycy and Schaefer went home with the trophies this time around.

After going birdie-less for the first 15 holes of the match, Schaefer broke a tie and went birdie-birdie on 16 and 17 at Perry Park Country Club in Larkspur to give her team a 2-and-1 title-winning victory Thursday over top-seeded Kristine Franklin of Colorado National Golf Club and Deb Hughes of Green Valley Ranch Golf Club. (The champions are pictured at top, with Schaefer at left.)

“I thought our match could go for 25 or 30 holes the way it was headed,” Schaefer said. “Tiffany definitely kept us in it with a few really good putts on the back nine and making pars when I was coming off the rails. But I was happy I could punch it over the goal for the team because those (matches) can go on and on and on if nobody puts that final nail in the coffin. So it felt really good.”

Thursday marked the first CGA championship for the 23-year-old Schaefer — though she notes she captured a title at the Colorado Junior Golf Association Haywacker event back in the day — and the third for Maurycy.

Maurycy, 52, won the CGA Women’s Senior Match Play last year — coincidentally in a final match against Franklin — but her other two-person title also came at Perry Park. That’s where she teamed with Kristin Feil to win the 2003 CWGA Brassie title.

“It’s heaven on earth,” Maurycy said of the setting. “Optically, it’s just so beautiful. It’s just stunning. It brings out the best of what Colorado has to offer.”

Thursday’s final was the only match in the championship flight main bracket in which the lower seed prevailed. Franklin and Hughes are both former CGA Women’s Senior Stroke Play Champions and Franklin was the CGA Women’s Senior Player of the Year in 2018.

On a couple of occasions on Thursday, they had rallied to tie the match. But after it happened again on the 15th hole, Schaefer worked her magic. On the 16th hole, she was off the green, a few feet beyond the fringe. After initially having a wedge in her hand for the shot and conferring on club choice with Maurycy, Schaefer eventually went with her putter. And from about 25 feet, her ball hit the pin and dropped for a birdie to put her and Maurycy 1 up.

“Don’t ask me to do it again, but it went in,” Schaefer said. “That was exciting.”

But she wasn’t done. On the 123-yard 17th, she hit a wedge that finished close enough to the hole — less than 18 inches — that the birdie was conceded. And after Franklin and Hughes missed their birdie attempts, the title was Schaefer and Maurycy’s.

“That shot really fit my eye for whatever reason,” Schaefer said.

“It was just a great way to finish,” Maurycy said. “(Schaefer) said we didn’t want to putt. She had it dialed in on 17, man. It was just unbelievable.

“We went out with the philosophy that we’re just going to do our best and we’re going to be aggressive. We never held back. We said, ‘What the heck. We’re not going to play it safe to win.”

“This is not an experience (winning championships) I have very often and that makes it all the sweeter,” she said. “And to do it with Tiffany is so fun. We had just a tremendous time out there. Tiffany is such a great and enthusiastic partner.”

Ironically, in Wednesday’s semifinals, Maurycy and Schaefer had advanced by beating the person that introduced them at last year’s Mashie — Moore, an eight-time Mashie champion, who partnered with Sloane Post this year. The eventual champions won that match by a 1-up margin.

Here are the results from the championship and consolation bracket finals from all 13 flights who competed this week at Perry Park and the Country Club at Woodmoor: