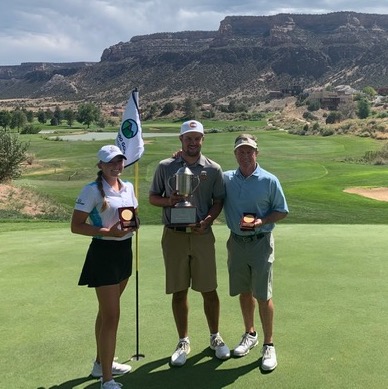 Less than an hour later, Kyle Pearson of Meridian Golf Club, a fourth-year player on Sullivan’s CMU team, completed a nearly-identical comeback for the open division title in the same event as he came from four down to win.

All in all, it was a big day for players with strong ties to the Western Slope at the championship that’s based in western Colorado.

Said Pearson: “It’s nice. That’s partly why I came over (to Grand Junction to play this weekend). I was trying to find some extra tournaments with everything that’s gone on. We play (Tiara) Rado probably 50 times a year, so there’s no reason why I shouldn’t be able to play good out there.

“I would have had a little bet with coach, but with him playing the blue tees it’s not really fair. He should be playing back there with us.

“I expect (that kind of performance) from coach. I was hoping to play well too with how much I’ve played there. Over three years I’ve probably played there 150 times so I feel like I know the course well enough. The local knowledge from playing it so much, I thought I had a pretty good chance this week. It helped having some home course knowledge, for sure.”

Meanwhile, easily earning the women’s title on Sunday was Emma Bryant of Green Valley Ranch Golf Club, a former 5A state high school individual champion from Eaglecrest High School who has verbally committed to play her college golf at the University of Denver beginning in the fall of 2021.

Coincidentally, Pearson and Bryant were the boys and girls champions at the 2017 Colorado Junior Match Play.

In the open division, Pearson finished strong for the title by playing his final seven holes in 4 under par en route to a 4-under 67. His 5-under-par total of 137 was good for a three-stroke victory over Hunter Swanson of Denver, who recently finished 18th in the High School Golf National Invitational in Pinehurst, N.C.

It’s been a strong last few weeks of golf for Pearson, who shot a 63 to qualify for the CoBank Colorado Open last month (he missed the 36-hole cut by one in the Open itself) and finished 10th last week in the CGA Amateur.

“It feels great” to win again, the 21-year-old from Highlands Ranch said. “It’s been a while. Honestly it might have been Junior Match Play (three years ago, at least as far as a large-scale event goes).I played pretty well last week (at the CGA Amateur), so I felt good about my game going into this week. I felt like I had a pretty good chance at winning. It’s definitely nice to win again.”

On Sunday, Pearson eagled No. 2 for the second straight day, this time sinking a 3-footer after lipping out his 138-yard second shot. Then he made a momentum-saving 25-foot par on No. 5.

Down the stretch, he and first-round leader and University of Colorado golfer Jack Hughes of Aspen battled it out. Hughes, the 2019 AJGA Hale Irwin Colorado Junior champion, led in the middle of the back nine, but Pearson, who was two groups in front of Hughes, birdied three straight, starting on No. 15, sinking putts of 25, 8 and 1 foot. Meanwhile, Hughes played his final two holes in 4 over par (bogey-triple bogey) and finished four strokes behind, in a share of third place.

“I was confident I” could rally on Sunday, he said. “I was expecting to have to go a little lower today. I wasn’t expecting Jack to come back that much after the way he played yesterday. Going into the day, I thought I had to shoot 6 or 7 under today.”

Despite a three-hole stretch in which he went 5 over on Sunday, making a triple-bogey 8 on the sixth hole, Swanson managed an even-par 71 for a runner-up total of 140. Three-time CGA Mid-Amateur champion Jon Lindstrom of Lakewood Country Club, who closed with a 5-under-par 30 on the back nine en route to a 69, shared third placed at 141 with Hughes and Nishant Datta of Metro Denver eClub, who carded a final-round 70.

After Pearson’s victory, a handful of his Colorado Mesa teammates dumped an ice cooler on him to celebrate.

“Thankfully they gave me enough warning so I could get my phone out of my pocket,” Pearson said. “I said, ‘You can dump it on me but tell me when so I can put my phone in my bag. I agreed to it.”

In the 28-player senior division, the 62-year-old Sullivan claimed the title for the fourth time, including second in a row. But this time, he came into the day trailing two-time CGA Senior Player of the Year David Delich of The Broadmoor Golf Club by four.

After being down by one to Delich going into No. 16, a two-stroke swing proved pivotal. Sullivan sank a 10-foot birdie while Delich made bogey to account for that swing and put Sullivan ahead for good as both players parred in.

Sullivan, a four-time qualifier for the U.S. Senior Amateur, made four birdies and two bogeys on Sunday to shoot a 2-under-par 69 — good for a 2-under 140 total — while Delich (two birdies, five bogeys) posted a final-round 74 to check in at 141. Placing a distance third, at 148, was Lonnie Miller of Redlands Mesa Golf Club.

“Dave is such a good player and competitor,” Sullivan said. “I knew it was going to be tough, but I thought if I shot something in the 60s, I’d probably have a chance.

“I knew I was going to have to come out and make some birdies.”

In the eight-player women’s competition, Bryant used the strength of her first-round 69, which yielded a nine-stroke lead, to notch an eight-stroke victory.

Bryant, whose brother Davis will compete in the U.S. Amateur starting Monday in Oregon, shot a 6-over-par 77 on Sunday to finish at 4-over 146. Julia Baroth of CommonGround Golf Course, who posted a 76 on Sunday, placed second at 154. Brandy McClain of Metro Denver e-Club was third at 160 after a 79 on Sunday.

“I wanted to play my best and see how it came out,” said the 17-year-old Bryant, who stayed with her Grand Junction-based grandparents over the weekend. “I needed to work hard to finish at the top of the leaderboard, which ended up working out great for me.

Over the course of 36 holes, Bryant made seven birdies, with six of them coming on Saturday.

Bryant plans on signing her letter of intent with DU in November.