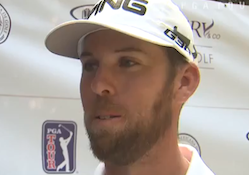 Former University of Denver golfer Chris Gilman won a title on the Dakotas Tour for the second time in the last three weeks on Sunday.

This victory, however, will attract more attention than the previous one.

Shooting a final-round 59 for a win will do that.

Gilman birdied his first seven holes and 13 overall in a bogey-free 13-under 59 (28-31) at the Bluffs South Dakota Open in Vermillion. The next-best score on Sunday at the Bluffs GC was a 66.

— In the first major championship of his pro career, Denver native and Colorado Academy graduate Mark Hubbard made the cut in the PGA Championship. He tied for 51st place. Hubbard carded scores of 70-71-70-70 at TPC Harding Park in San Francisco — not far from where he went to college at San Jose State — to finish at 1-over-par 281, 14 strokes behind champion Collin Morikawa.