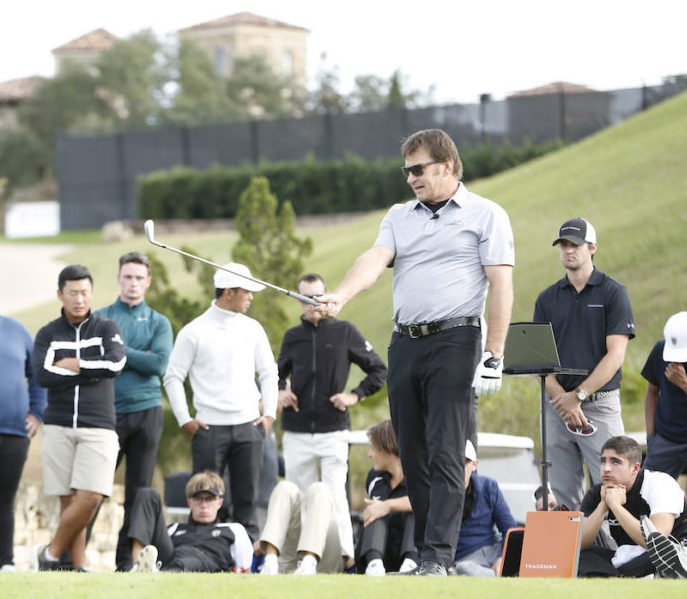 The folks who run the CoBank Colorado Open Championships — and The First Tee of Green Valley Ranch — will go back to the World Golf Hall of Fame well for the host of the second CoBank PEAK Performers event.

Almost everything will be the same for this year’s PEAK Performers as it was last August, when Annika Sorenstam was the headliner at the national First Tee-related event that was held at The Broadmoor Resort in Colorado Springs — with two major exceptions.

The first is that this year the World Golf Hall of Famer that will be interacting and playing golf with nine First Tee members from across the country will be Nick Faldo, winner of three Masters and three British Opens. Faldo (pictured in an IJGT.com photo) is scheduled to play six holes each with three different First Tee threesomes on Aug. 23, after participating in a meet-and-greet with the kids and CoBank executives and guests the night before.

The second major change is that this year’s event will be taken on the road — specifically to Terranea Resort in Rancho Palos Verdes, Calif., a site just west of Long Beach and located right on the Pacific Ocean.

Kevin Laura, the CEO of The First Tee of GVR and the CoBank Colorado Open Championships, finalized the deal this week.

The CoBank PEAK Performers event is expected to return to The Broadmoor in 2020, but it’s being held in conjunction with a conference CoBank holds annually, and this year that conference happens to be in the Los Angeles area.

As was the case last year, eight of the nine participating First Tee members will be selected from the eight First Tee regions in the continental U.S., with the final participant coming from The First Tee of GVR. Applicants are limited to kids age 14-18.

Greenwood Village-based CoBank and The First Tee of GVR are co-sponsoring and hosting the event for the second straight year.

“It was so successful the first time out that we’re going to duplicate it,” Laura said. “CoBank enjoyed it from start to finish. Everything worked out great and Annika had such a good time. She spent more time than she was contracted for. And we hope that will be the same way with Nick — that he gives them extra time like Annika did.”

Faldo is a very well known figure in golf, not only for winning six major championships, but for his work since 2004 as a prominent TV network golf analyst, first at ABC, then at CBS. And the knighted Englishman is no stranger to supporting junior golf, as the Faldo Series has long been anot-for-profit organization that “aims to create access to the sport for a younger audience through grass-roots initiatives at its tournaments.”

First Tee kids from across the country — boys with handicaps of 10 or less and girls with 12 or less — can apply for the PEAK Performers, an all-expenses-covered event.

Participants will be chosen on the basis of an essay, their answers to various questions, their golf resume, their schoolwork and activities, and letters of recommendation. The First Tee national home office will forward worthy candidates to the Colorado Open Golf Foundation selection committee, which will pick the winners.

Besides playing with Faldo, the participants will spend time visiting some of the top landmarks in the L.A. area, including the Queen Mary in Long Beach.

“CoBank is promoting their engagement with The First Tee more than just the three weeks of the CoBank Colorado Opens,” Laura said. “That’s why this national opportunity is really exciting for them because they have customers all over the country.”

Last year, two Colorado-based First Tee members participated in the PEAK Performers event with Sorenstam at The Broadmoor — Sarah Abercrombie of The First Tee of Pikes Peak in Colorado Springs, and Hunter Swanson from The First Tee of Green Valley Ranch.

CoBank Colorado Open/GVR First Tee organizers also plan to host a junior exhibition at Green Valley Ranch Golf Club this year. They hope to attract a big-name female professional for the event. The date remains up in the air, though it will likely take place in the June-August timeframe.

CoBank-sponsored junior exhibitions have drawn many notable pros to Colorado in recent years. The lineup in 2016 featured Hale Irwin, Ryan Palmer and Paula Creamer. In 2017, it was David Duval, Lexi Thompson and Mark O’Meara. And last year, besides Sorenstam, Matt Kuchar came to Colorado for a CoBank event.