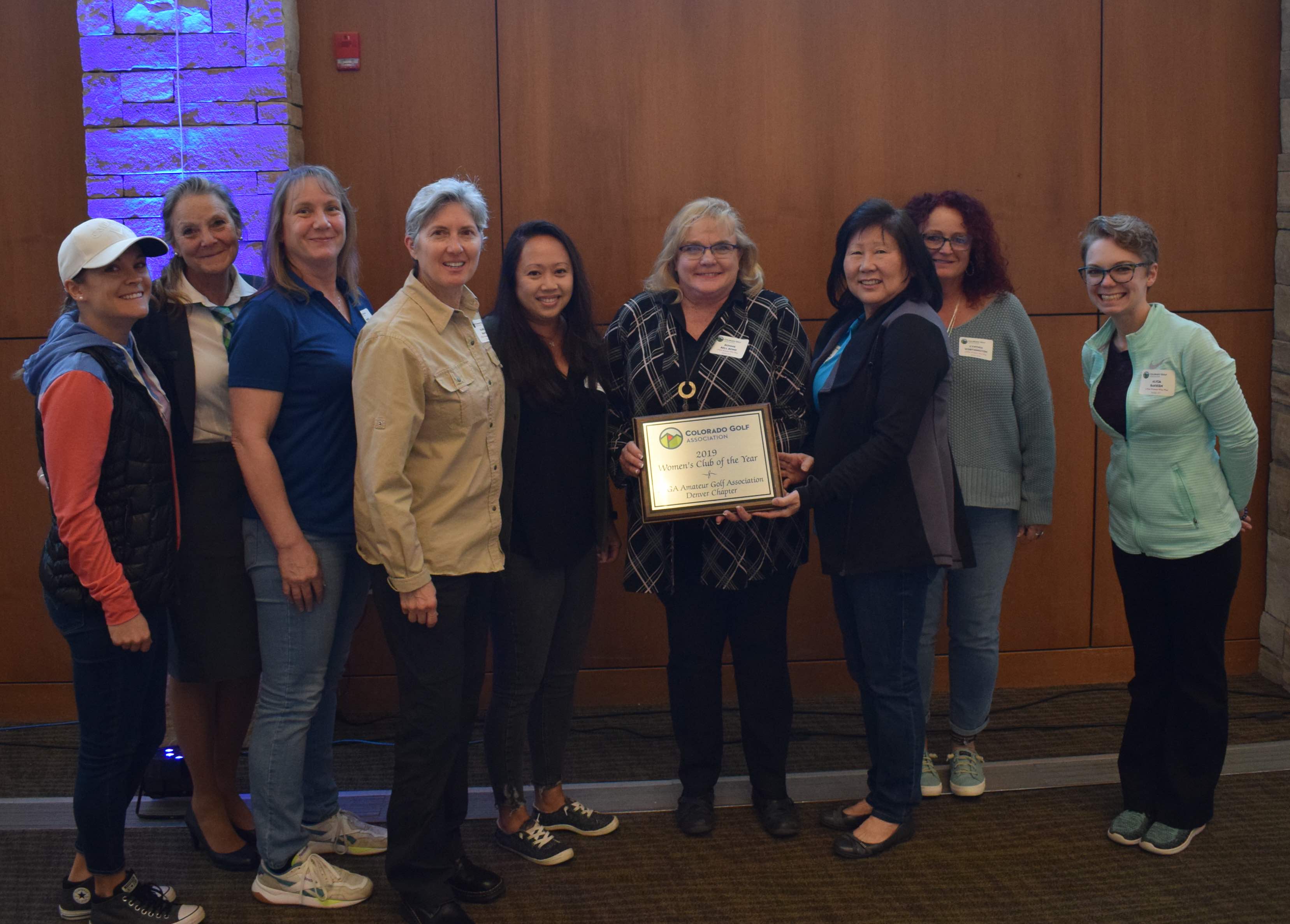 The winner of the CGA Women’s Club of the Year Award for 2019 may not ring a bell for a lot of people in the Colorado golf community, though the acronym in the name certainly does.

The LPGA Amateur Golf Association-Denver Chapter has only been around under that moniker for a couple of years. But its history goes much further back — when it went by another, more familiar name: the Executive Women’s Golf Association, which was founded in the early 1990s.

All of which is a big reason why the Denver chapter of the LPGA Amateur Golf Association applied for the Women’s Club of the Year honor. The club wanted to earn some name recognition and exposure, and it certainly doesn’t hurt that cause that the Denver chapter of the LPGA AGA landed the award, which was given out at last month’s CGA Women’s Golf Summit.

“We’re very, very excited,” said Alicia Bakken, the current president of the organization. “Mostly it gives us a little bit more recognition to kind of get our name out there and our association out there for other women so we can grow our membership because not too many people know about us. We used to be known as the Executive Women’s Golf Association. Over the past two years it’s been rebranded and we were bought out by the LPGA. So we now we have a little better brand, I think, to attract more women to join our association.”

Linda Yamaguchi, a member of the organization for about a dozen years, was its president last year when the board made it a goal to earn the CGA Women’s Club honor. Board member Cecile Petro spearheaded the project.

So why the name change for the organization, which took place in 2018?

“Beginner golfers and women who weren’t executives, they were afraid that it was for executive women and they didn’t want to join or they felt intimidated about joining because of the word ‘executive’,” Yamaguchi noted. “For years we’ve been trying to explain: That was the name originally, but now the philosophy and mission has changed and they’re open to all women of all golfing abilities. When you’re trying to explain that constantly, you kind of get tired of it. So they decided to change the name.”

Whatever the name of an organization might be, when selecting the CGA Women’s Club of the Year, among the key determining factors is community-related work it does.

In the case of the LPGA AGA-Denver Chapter, the organization raised money and/or volunteered for LPGA*USGA Girls Golf, Play for P.I.N.K. (which benefits breast cancer research), The First Tee of Denver, Toys for Tots and Drive Chip & Putt qualifying events. In addition, the club sponsored a team of four players for the Find CommonGround Spring Fundraising Tournament last May, which benefits CGA programs at its CommonGround Golf Course, including the Solich Caddie & Leadership Academy, Hale Irwin Player Program, and the CGA’s Community & Wellness programs.

“It was good for us to be out there and to support the Colorado golf community,” Yamaguchi said.

Also, the Denver chapter of the LPGA Amateur Golf Association hosted two rules seminars, which introduced members to the revised Rules of Golf that went into effect at the beginning of last year. One of the organization’s members, rules official Dana Murray, the CGA’s 2018 Women’s Volunteer of the Year, led the two-hour seminars, which were attended by about 45 members.

And the organization organized a golf program for beginners which included a five-week clinic conducted by PGA professional Christopher Hamilton at the Kennedy Golf Course.

When the LPGA Amateur Golf Association-Denver heard that it had been selected the CGA Women’s Club of the Year, members saw it as a significant accomplishment not only for the Denver chapter, but for its national organization.

According to its website, the LPGA Amateur Golf Association has chapters in more than 110 cities/areas, including one based in Northern Colorado. It says its mission is “to provide a welcoming golf community for all women. … We bring together and connect women who share a passion for golf. The LPGA Amateur Golf Association hosts thousands of golf, social, and networking events annually as well as providing members with the opportunity to participate in major Association championships and events.”

As for the Denver chapter, it had 138 members as of the end of 2019. The organization provides those members a variety of playing and social opportunities, including weekday and weekend leagues at several metro-area courses, and weekend outings once or twice a month during the season — either in the mountains or closer to home.

In addition, there are competitive events offered through the national organization — including individual stroke play, scrambles and match play — held regionally or nationally.

“It’s kind of fun to go around and play different courses vs. the same one over and over,” Bakken said.

For more information on the Denver chapter of the LPGA Amateur Golf Association, CLICK HERE.