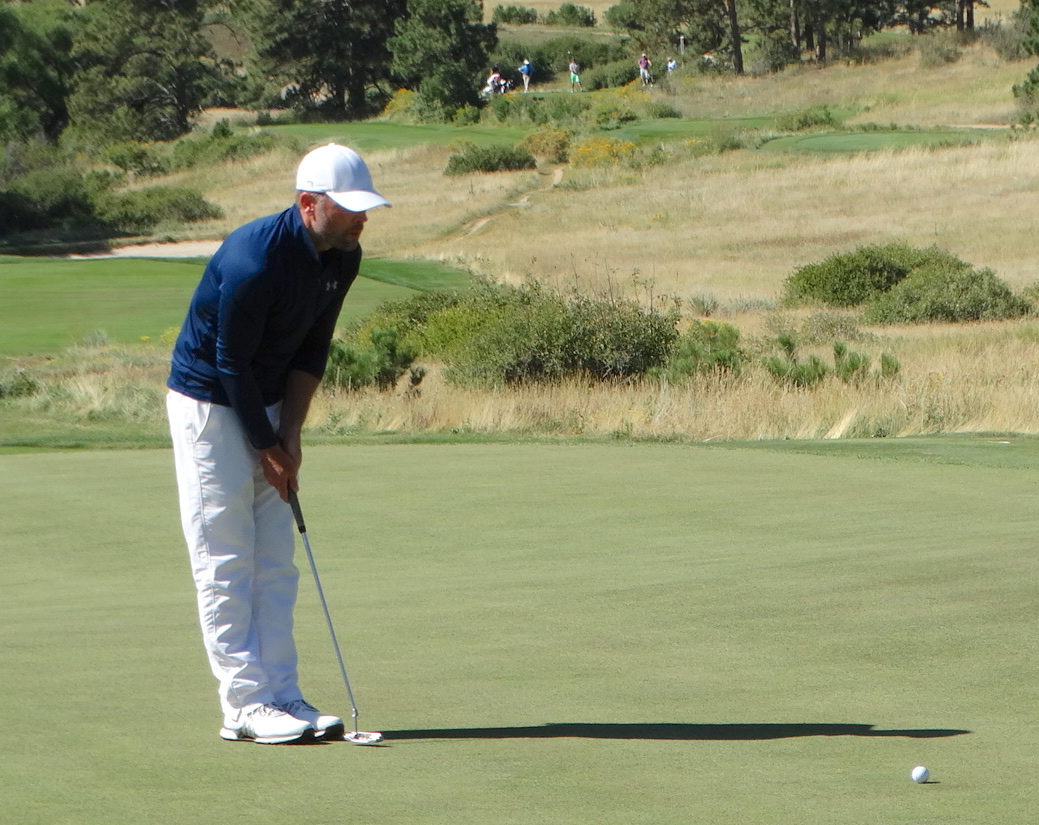 Locals Axlund, Olson tied for 14th at 1 under par after opening round of stroke play at U.S. Mid-Amateur

Ryan Axlund of Englewood has now played a grand total of five rounds in USGA national championships, and two of them have taken place at CommonGround Golf Course in Aurora.

Seven years ago, the Coloradan shot a 74 at that facility en route to failing to make match play at the 2012 U.S. Amateur that Cherry Hills Country Club hosted.

On Saturday, in the U.S. Mid-Amateur taking place in Colorado, Axlund played considerably better on the course that the CGA owns and operates. In fact, he was 4 under par after eight holes and was near the top of the leaderboard at the 264-man event. And despite playing the back nine in 3 over par, his 1-under-par 69 left him in a share of 14th place.

“I’m thrilled,” said Axlund, who is looking to make match play for the first time in his three USGA championship appearances. “My goal today was to try to keep it between the lines and just stay out of my own way as much as possible. I’m very happy with how the day turned out. If you go under-par in the first round (of an event like this), that’s always going to be pretty good.”

For the day Axlund (above) chalked up four birdies and three bogeys on a golf course that has added a couple of new wrinkles since the 2012 U.S. Am.

“The new tees they added on 8 and 9 definitely gave those two holes a very fresh look,” he said. “It was nice to see the updates they had made to the golf course.”

After Saturday’s opening round of the 36-hole stroke-play portion of the event being held at both CommonGround and Colorado Golf Club, Axlund and former University of Colorado-Colorado Springs golfer Jon Olson (pictured at top) are leading the 13-man local contingent for the U.S. Mid-Am. While Axlund was 1 under par at CommonGround, Olson was 1 under at Colorado Golf Club.

The players will switch courses on Sunday for the second day of stroke play — with Axlund going to Colorado Golf Club and Olson to CommonGround. The top 64 golfers at the conclusion of of round 2 will advance to match play. Actually, getting down to exactly 64 will likely require a playoff, which would be held Monday morning at Colorado Golf Club.

On Saturday, 29 players shot sub-par rounds, with 64 golfers sitting at 1 over par or better after 18 holes.

In the competition for stroke-play medalist honors, Marc Engellener of Rocklin, Calif., and Robbie Ziegler of Portland, Ore., matched 5-under-par totals to lead the way. Engellener fired a 5-under 65 at CommonGround and Ziegler a 5-under 67 at Colorado Golf Club.

As for Olson, he lived and went to college in Colorado before Colorado Golf Club was built, but he seemed to make himself right at home at the Parker course in Saturday’s opening round.

Olson, who played golf at UCCS from 1999-2003, is back in his old haunts hoping to make a little magic in the national championship for amateurs 25 and older.

In that regards, it was so far, so good on Saturday. The 39-year-old, who now lives in Ankeny, Iowa, played his first eight holes in 4 under par, briefly giving him a share of the lead. That was before two three-putts on his back nine — the front at Colorado Golf Club — led to his 71.

“When you come back to a place like this, it’s kind of like your second home in a way,” Olson said. “Being comfortable is really important in these kind of environments for a USGA event. You’ve got to know everything that’s in front of you and take everything with a grain of salt. I’m really happy with the start. I figured if I’d shoot 72-73-74, that would be fine. I’m a little under that, so we’ll do it again tomorrow and see what happens.

“It’s stroke play. All you need to do is get to Monday, then you’re starting over again. “The first nine, I played great. I didn’t feel like I wasted anything. We got on the clock (for slow play, after his 11th hole), so that kind of got me out of rhythm a little bit. It probably cost me two (shots). I three-putted 4 and 6. But under par at a USGA is always really good.”

Olson, a 2003 NCAA Division II second-team All-American at UCCS, has qualified for four U.S. Mid-Ams, but is competing in just his second. He made match play in his previous appearance, in 2014.

In Iowa, there isn’t much Olson hasn’t done, having won the Iowa Open (when he was still a pro in 2007); the Iowa Golf Association Amateur; the IGA Match Play twice, including this year; the IGA Mid-Amateur three times; and the IGA Public Links.

Given his accomplishments and the way he feels about Colorado, Olson sees no reason why he can’t be a contender this week at Colorado Golf Club.

“This has been on my radar because it was Colorado,” he said. “I want to make a serious run here, I really do. I’ve had some friends who have won it.

“It’s nice to be back in Colorado. I kind of feel at home again. I love this place. I’d love to come out here full time some day.”

On Saturday, Olson was 4 under par through 11 holes before playing the next four in 3 over. But at the end of the day, he was still a happy camper given that he finished under par at a venue that has hosted a Senior PGA Championship and a Solheim Cup.

“This place is awesome,” he said. “We’re really lucky to be able to come out here where they’ve hosted the Solheim Cup and the Senior PGA. And this isn’t the last thing they’ll be hosting. It’s built for hosting events.”

As far as other competitors with strong Colorado connections, Nick Nosewicz of Aurora is next-best as a 2-over-par 74 at Colorado Golf Club put him in 65th place. Nosewicz, who will celebrate his 36th birthday on Sunday, made three birdies, three bogeys and a double bogey in round 1.

None of the other locals shot 75 or under.

Matt Call of Castle Rock, playing at his home course, fired a 78 at Colorado Golf Club after going eagle-triple bogey-birdie on his final three holes. Colorado Golf Hall of Famer Kent Moore, the oldest player in the field at age 63, opened with an 82 at Colorado GC.

Here are the first-round scores for all the players with major Colorado ties in the field:

14. Ryan Axlund of Englewood 1-under 69 at CommonGround

104. Charles Santaularia of Lakewood 4-over 76 at Colorado GC

155. Stephen Powers of Denver 6-over 76 at CommonGround

194. Michael Harrington of Colorado Springs 8-over 78 at CommonGround

The Leaders: The leaders after day 1 of stroke play each shot 5 under par on their respective courses. Robbie Ziegler of Portland, Ore., fired a 5-under 67 at Colorado Golf Club and Marc Engellener of Rocklin, Calif., posted a 5-under 65 at CommonGround Golf Course.

Engellener eagled the par-5 third hole at CommonGround and added four birdies and a bogey. Ziegler also made an eagle — at the 16th at Colorado Golf Club — and made three of his six birdies on his final three holes of the day.

Ziegler, who was born in Denver, went birdie-eagle-double bogey on Nos. 15-17 (his sixth through eighth holes of the day), with the eagle coming from 20 feet. On his final nine holes, he chalked up five birdies to go along with a bogey. Just in his final dozen holes, Ziegler drained one 30-foot putt, two 20-footers, and three 10-footers.

“My back nine, I hit it close a bunch and I made all of them essentially,” he said. “It was real steady and the rest took care of itself.”

Engellener played his first eight holes at CommonGround in 5 under par. The spark came on the par-5 third hole, where he hit a hybrid from 300 yards to 8 feet and made eagle. His subsequent three birdies came from 3, 4 and 6 feet.

“I got off to a crazy hot start,” he said. “I hit my driver really well today, so I had a lot of wedges into the green and hit a couple of wedges close.

“It was probably about as tough and firm of a golf course as I’ve probably ever played in a tournament. … In terms of a tournament set-up, I don’t think you could have done a better job. I mean it was just fair, tough golf.”

For all the scores from the U.S. Mid-Amateur, CLICK HERE.