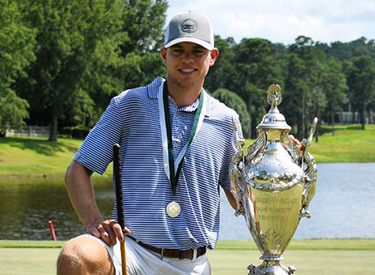 Last month, AJ Ott came close to taking home the title in the Southwestern Amateur, tying for second place in an 83-man field.

On Saturday, in contention at another significant amateur championship, the Fort Collins golfer finished second to no one.

The Colorado State University golfer, who recently qualified in Colorado for his third consecutive U.S. Amateur, rallied in a big way in the final two rounds and won the 113th Southern Amateur in Little Rock, Ark.

After going 70-73-64-67 for a 10-under-par 274 total, Ott went to a playoff that lasted two holes against University of Washington golfer Noah Woolsey of Plesanton, Calif. Ott, the 2018 CGA Match Play champion and Player of the Year, drained a 12-foot birdie putt on that second extra hole to claim the title.

Over the final 36 holes of regulation, Ott carded 14 birdies.

(Ott is pictured in a Southern Golf Association photo.)

For all the scores from the 2019 Southern Amateur, CLICK HERE.