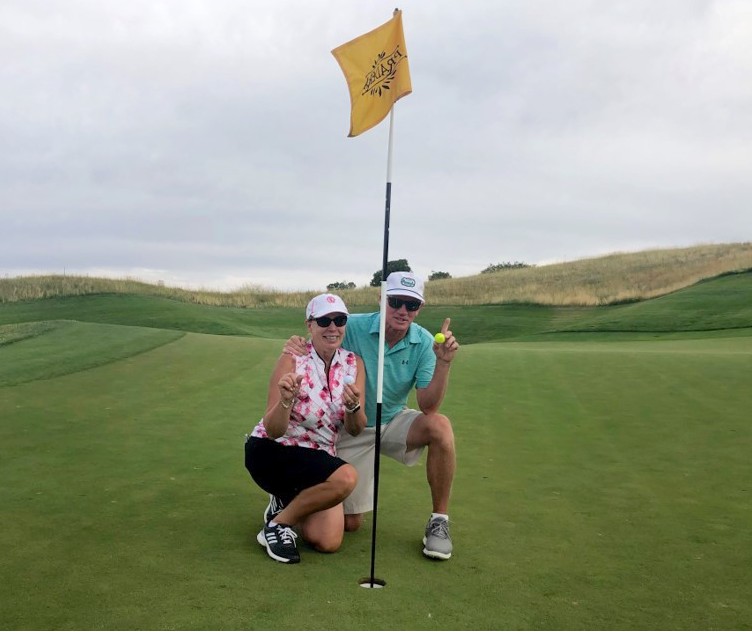 Playing in back-to-back groups, husband and wife both make hole-in-one at No. 8 at The Club at Pradera

A few months ago, we passed along the odds-defying story of two players in the same foursome making a hole-in-one on the same hole and on the same day at a Colorado course (READ HERE).

According to the most recent information from the National Hole-In-One Registry, the odds of that happening anywhere are about 17 million to 1.

Well, we have a new, more recent, feat in Colorado that doesn’t exactly match that scenario, but is certainly along the same lines.

On Sept. 15 at The Club at Pradera in Parker, Patty Person and husband Mark Person were playing in back-to-back groups, with Mark teeing off at 10:20 a.m. and Patty at 10:30.

When he came to the eighth hole, Mark made an ace from 150 yards, using an 8-iron. It was the fourth hole-in-one of his life and Pradera’s eighth hole has proven his personal good-luck charm in that regard, with three of his four aces coming on that hole.

Shortly thereafter, it was Patty’s turn. At that same hole, playing 120 yards for her, she recorded an ace of her own, using a 6-iron. It was her second hole-in-one as she broke the ice last year at CommonGround Golf Course in Aurora.

It was an amazing feat of coincidental good fortune, but with a twist. Neither of the two knew about the other’s ace until hours later.

“I didn’t tell Mark right away because he was playing a match,” Patty noted in a recent email. “When I saw them shake hands on hole #17, we drove up to find out who won the match and to tell him about my hole-in-one.  Mark won the match and then his partner said, ‘And he got a hole-in-one on #8!’ I said, ‘You’re kidding. I got a hole-in-one on #8!’ We couldn’t believe it at first  — just amazing!”

Noted Mark in recalling how it all played out: “It was exciting and hilarious at the same time!”

(The two ace-makers are pictured above.)

Patty and Mark Person both take lessons from Trent Wearner of Trent Wearner Golf. Patty, 63, owns an 18.3 USGA handicap index, while Mark, 65, is a 5.5. They both live in Parker and are members at Pradera.