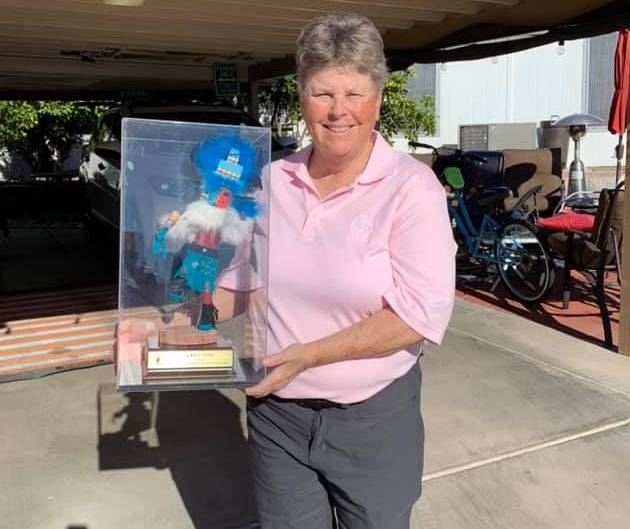 Colorado Golf Hall of Famer Kim Eaton could be having problems finding space for all of her state amateur player of the year awards.

The 61-year-old — who grew up in Greeley and spent much of her life in Colorado but now lives in Arizona — owns a record eight CGA Women’s Senior Player of the Year awards, all coming in a nine-year period from 2009 through 2017. In addition, she’s captured four overall CGA Women’s POY honors, the last coming in 2010.

And in her new home state of Arizona, Eaton now has almost as many POY awards. There’s one overall Arizona Golf Association Women’s Player of the Year honor (2013). And she recently was presented the AGA Women’s Senior POY for the eighth time.

So that’s eight Senior POYs each for Colorado and Arizona for Eaton, who’s advanced to the quarterfinals in four U.S. Senior Women’s Amateurs.

In 2020, the former pro won twice in Arizona — the AGA Women’s Four-Ball with Leigh Klasse and the Partners tournament with Judy Penman. She was also a runner-up twice.

In Colorado, Eaton shares the record for CGA women’s/CWGA championship titles with fellow Colorado Golf Hall of Famer Carol Flenniken. Both own 25 such championships.