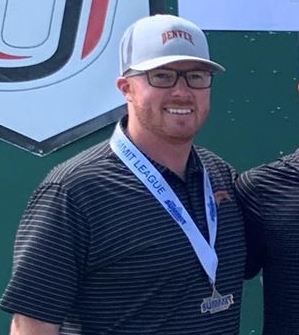 Trake Carpenter, the 2021 Summit League Men’s Coach of the Year, resigns after one season as DU men’s golf coach

For the second time in a year, the University of Denver will be searching for a new men’s golf head coach.

Almost a year to the day after Erik Billinger resigned to take a position with ACE Scholarships, his successor, Trake Carpenter, stepped down and also is leaving the college coaching ranks.

Carpenter, the Summit League’s men’s Coach of the Year in 2021, said on Saturday vie email that he resigned from his DU position effective last Wednesday. He announced that he’s becoming the vice president of golf development (and chief operating officer) for Brian Cain Peak Performance, a firm that focuses on mental performance coaching.

Carpenter was hired as DU men’s coach last July after he served for one season on the staff of Stanford men’s head coach Conrad Ray. Carpenter’s one season at DU — his first as a college head coach — was actually limited to one semester of intercollegiate competition as all Colorado-based NCAA Division I golf programs based in Colorado canceled the fall portion of the season due to Covid-19 safety concerns.

Under Carpenter, the Pioneers won the Summit League team title. And at an NCAA Regional they finished three strokes out of the final qualifying spot for the NCAA National Championships.

“I’m grateful for how all the players at Denver embraced my vision for the program and (I) will always cherish the relationships we established,” Carpenter said in a release, later noting he wouldn’t comment further regarding DU.

“When life presents great opportunities, I make decisions based on what will push the limits of my personal and professional development,” Carpenter also said in the release. “The opportunity to be the Head Men’s Golf Coach at Denver amidst a global pandemic was a challenge I would not have been able to navigate without the help of Mental Performance Coach Brian Cain. Our program’s work with Brian was essential in developing a culture of resilience and an elite mindset that propelled us to win the 2021 Summit League Conference Championship and achieve the programs’s top finish ever at the NCAA Regionals.”