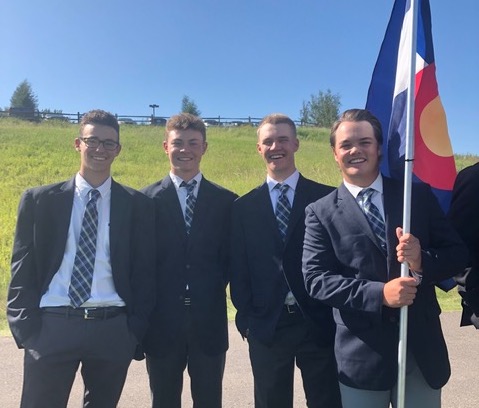 And they’re back this year, trying to perform a successful encore with two new teammates.

Their title defense began on Tuesday in Edmonton, Alberta, Canada, and the Coloradans are in the middle of the pack following day 1 of the 54-hole tournament.

With the top three individual scores from each four-man squad counting toward the team total, the Junior Golf Alliance of Colorado-sponsored unit shot a 1-over-par 214 and sits in eighth place out of the 18-team field that includes players from the western U.S., Canada and Mexico.

Franklin, who earlier this month finished fifth in the prestigious IMG Academy Junior World Championships, continued his strong play on Tuesday, shooting a 3-under-par 68, which leaves him in a tie for sixth place individually out of the 72-player field. He’s three strokes behind co-leaders Mateo Fuenmayor of Beaverton, Ore., and Ian Siebers of Bellevue, Wash.

Franklin made four birdies and one bogey on Tuesday.

Stewart, the Oklahoma State-bound defending individual champion in the Junior America’s Cup, opened with a 1-over-par 72, which put him in 20th place individually. Competing in his third JAC, Stewart made an eagle, two birdies, three bogeys and a double bogey on Tuesday.

TJ Shehee of Mead, who’s headed for the University of Northern Colorado, posted a 74. Jack Hughes of Snowmass Village, the 2019 AJGA Hale Irwin Colorado Junior champion who will play golf at the University of Colorado, carded a 77 after finishing the two nines with a triple bogey and a double bogey, respectively.

(The Colorado team is pictured above, from left: Hughes, Franklin, Shehee and Stewart.)

Here are the scores of the Colorado team members: