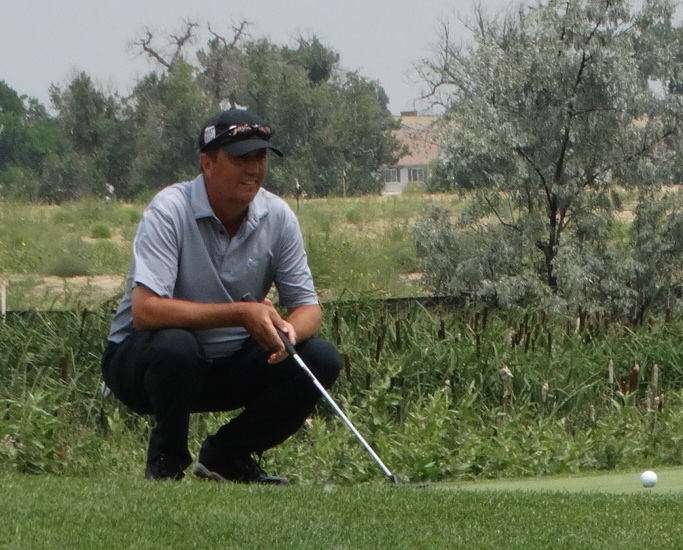 (Updated Dec. 7) Qualifying for PGA Tour Champions is anything but a simple task for a senior “rookie” — even many players who have had long careers on the PGA Tour.

Unless you’ve won a handful of PGA Tour titles or more — less if you throw in a major — you’ll likely have to go the Q-school route to earn a Champions card.

And, after a Q-school process that lasts two stages, a grand total of just five players per year earn cards.

Which makes this week’s accomplishment of Parker resident Shane Bertsch all the more remarkable. Not only did Bertsch land one of those five cards in his first try — after going through both stages of qualifying — he won the 78-player final stage of Q-school outright on Friday in Scottsdale, Ariz.

“It’s really kind of still surreal,” Bertsch said in a phone interview with ColoradoGolf.org. “To think that only five guys in the world qualify and I was the top guy, I’m pretty proud of that.

“People were texting me after the second and third rounds saying, ‘You’ve got to stay in the top five.’ But I had the right idea. I said, ‘You know what? I’m going to go try to win the thing. That’s all I’m looking at. If I can do that, that will take care of itself.’”

The Coloradan played better and better as the week went on at TPC Scottsdale’s Champions Course, shooting rounds of 70-67-65-65 for a 17-under-par total of 267 and a one-stroke victory, worth $30,000. Including the four rounds of the first stage, Bertsch’s scoring average in Q-school this fall was a gaudy 67.9.

Bertsch, a Denver native who won the 1998 Colorado Open, is no stranger to playing on PGA Tour-affiliated circuits. He’s won three times in 325 starts on the Korn Ferry Tour. And he has five top-10 finishes in 194 PGA Tour events. Last year, Bertsch placed third at the CoBank Colorado Open, one stroke out of a playoff. But in 2019, including the two stages of Q-school, Bertsch has played a grand total of 15 competitive rounds.

“This means everything,” Bertsch said of earning a PGA Tour Champions card. “I missed my first year of (tour) competition this last year — my first since 1995 — and I started looking for other things to do even though I knew I was going to attempt to qualify — and if I didn’t make it do some (Monday) qualifiers next year. But I’ve made it, and it changes a lot of things. I’ve been dabbling in some teaching and stuff — I proved to myself I could do that this last year — but it’s not what I want do to.

“It means I’ve got another chance. I never really got as much out of my PGA Tour career as I wanted. Everything was coming along pretty good even though I was getting up there in age” until having left shoulder surgery in 2016. “… I was starting to lose interest — not really hope but it was just getting hard to go through the grind on the Korn Ferry Tour. I had status out there this year, but I didn’t have the desire to really do it.

“But I’m rejuvenated now. When I showed up at the first stage of Champions school, it was fun to see the guys that I haven’t seen in a long time. It just gave me a boost of confidence because I felt I was as good or better than any of them, just measuring up the games that I saw.”

In some respects Bertsch will be going into his PGA Tour Champions career the way fellow Coloradan Jennifer Kupcho went into her rookie season on the LPGA Tour.

Like Kupcho, he’ll give his fellow tour players a head start on the season. Just as Kupcho did on the LPGA circuit in 2019 — when her rookie season didn’t begin until late May as she concluded her college career — Bertsch will have a while to make his debut as a card-carrying member of PGA Tour Champions. In his case, it’s because he won’t turn 50 until March 30, by which time the senior tour will have played six of its 27 events for the 2020 season.

“Having a chance to qualify at 49, it’s a no-brainer that I’ve got to try, but it is a little bit of a bummer that I can’t play until April,” Bertsch said. “But I’ll get in even better shape and keep working on what I’m working on. If I get 20 events (in 2020), that gives me hope. If I have 20, I can do that (keep his exempt tour status). I just have to play solid. And better play early can lead to more tournaments. I don’t get in the majors or anything, but I can earn my way in through good play when I start playing. If I get 20 events, I feel comfortable with that.

“I expect to play good. I really do. I feel like I know everyone’s game that’s out there. I know there are great players and there’s going to be more great players joining the tour this year, but it’s nobody I haven’t played against before. And really, I’m not playing against anyone. I’m just playing against the golf course, and I know my game can hold up. … I’m really looking forward to it. I’ve got high expectations. I want to win next year and stay out there and have a whole new career.”

In Scottsdale, Bertsch put the hammer down by playing the final 36 holes in 12 under par, making just one bogey in the process. He was in 24th place after round 1, but his 67-65-65 last three vaulted him to medalist honors.

For the week, Bertsch finished with 22 birdies and five bogeys.

“The feelings I had (Friday) were very similar to those back in the day when you know you’re playing for everything and it’s hard to keep your mind from wandering,” said Bertsch, who three times advanced from the final stage of Q-school to the PGA Tour. “I was just incredibly proud of myself for being able to keep it together and stay patient.”

Players finishing 6-30 (and ties) on Friday will be eligible to enter weekly qualifying tournaments — and avoid pre-qualifying — for PGA Tour Champions events in 2020.

Here are the round-by-round scores for players with strong Colorado ties who competed in the final stage of Champions Q-school this week: