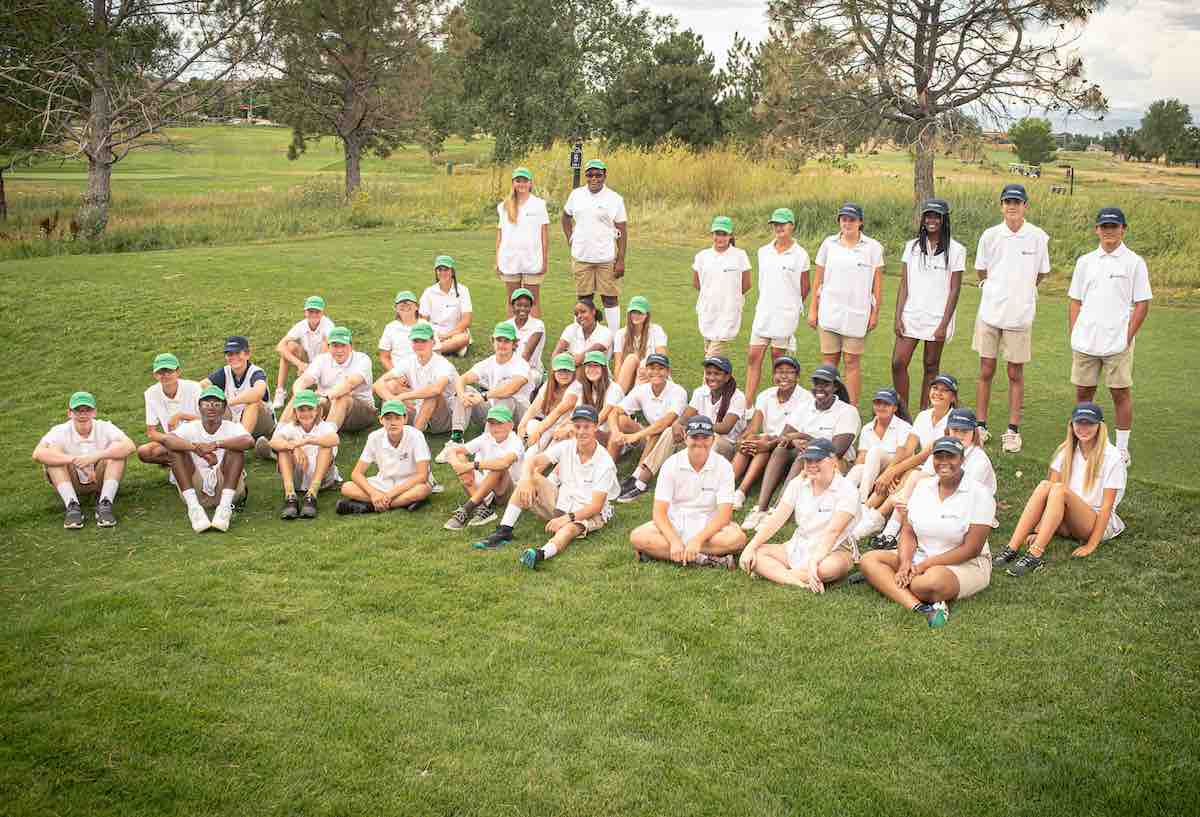 Before moving to Colorado several years ago, Danny Forebaugh lived in Chicago, which may be about as close to the capital of caddying in the U.S. as there is. The metro area around the Windy City is home to the Western Golf Association, which administers the Evans Scholarship for caddies, and to The Caddie Hall of Fame.

So even though Forebaugh was a little young to caddie when he lived in Chicago, the many benefits of looping was certainly never lost on his family.

“Being from Chicago, the Evans Scholarship is huge out there,” Forebaugh said in a phone conversation this week. “My mom’s university had the scholarship — the University of Illinois — and she was very well aware of it. And we’ve had friends get it.

“When we moved out to Colorado, we still had the Evans Scholarship in mind. My mom really wanted me to caddie. It was a really big goal of ours when we moved out (here). She somehow found the Solich program, and she got me in it. She liked the leadership aspect of it. And I basically did the rest.”

The Solich program Forebaugh referred to is the Solich Caddie & Leadership Academy, a flagship program for the CGA which just completed its ninth season at the association-owned CommonGround Golf Course in Aurora. Other SCLA chapters are based at Meridian Golf Club in Englewood and in Grand Junction. In addition, a spinoff of the SCLA, The Broadmoor Caddie & Leadership Academy, formed in Colorado Springs this year.

For Forebaugh — and for many other youth caddies — the Solich Caddie & Leadership Academy has been a godsend. The SCLA promotes the use of caddies through a subsidized system — by paying their base fees through an educational grant, with participating golfers having the option of adding a tip. It also features leadership and personal finance classes, and all participants do community-service work as part of the program.

In addition, each year a handful or so of caddies from the SCLA are candidates for the Evans Scholarship, a full-tuition and housing college scholarship for caddies that has a house at the University of Colorado, among many others across the country.

“I love caddying. It’s my favorite thing to do, by far,” said Forebaugh, who earned the Caddie Leader of the Year Award from the SCLA’s Meridian chapter after racking up about 60 loops in 2020. “I have absolutely loved the Solich program in every way. When I first started (in 2019), I was very excited. I met a lot of great people and made connections. And the second year I grew those connections. I basically go out with the same golfers every time. It’s a great program, and I love Meridian. It’s a great experience.”

And when Forebaugh says he met a lot of great people, that includes some very famous ones. In 2020, he forecaddied in groups that featured Pro Football Hall of Famer John Elway and NHL players Will Butcher (New Jersey Devils) and Denver native Troy Terry (Anaheim Ducks), both former University of Denver standouts.

But this year was certainly an unusual one for the Caddie & Leadership Academies due to the Covid-19 outbreak. For the SCLA, it meant no bag-carrying caddying for 2020 aside from some rounds in Grand Junction; otherwise, looping was limited to forecaddying and hole-specific caddying.

“The start of the program this year presented a lot of challenges and uncertainty,” Emily Olson, the CGA’s manager of caddie development, said in an email. “However, thanks to the creativity, flexibility and hard work from our leadership team, caddie managers and caddies, the summer turned out to be extremely successful.”

While the pandemic certainly had a significant effect on the SCLA this year, it was even bigger for The Broadmoor Caddie & Leadership Academy, which was launched early in 2020 but was only a shell of what organizers hope it will become.

With The Broadmoor Resort being closed for three months and not reopening until June 28, then with the restrictions in place thereafter, the kids in the BCLA weren’t permitted to caddie in 2020. But the year wasn’t totally for naught as program participants still did a full summer of volunteer work around Colorado Springs, earning their stipend in the process.

“The Covid situation kind of put things on their head in regards to anything normal,” said Mark Kelbel, program director for the BCLA and a former PGA head professional at The Broadmoor. “We were never able to officially caddie at The Broadmoor, so the caddie thing actually did not exist. But what we did do is we got into the golf community throughout Colorado Springs” by way of community-service/volunteer work.

During the summer, the BCLA kids picked up balls at the driving range for the Country Club of Colorado twice a week and for Cherokee Ridge Golf Course once a week. They fed the hungry/poor/homeless at the Marian House Kitchen on Tuesday mornings, and cleaned the athletic fields at the El Pomar Youth Sports Complex on Thursday afternoons. The kids also learned how to play golf — or to improve their games.

“We kept the kids busy, and everything points to the future,” Kelbel said. “All in all, I think it was a great introduction for the kids in some respects. A lot of the kids that had been caddying (at The Broadmoor) were great leaders, great representatives of the BCLA and of caddies in general. They were hard-working, they showed up and did their job. And believe me: Everybody in town was glad to see the BCLA kids coming.

“I got more comments from people all over the community saying they were very impressed that the kids were actually giving back to the community and doing what they could — and incorporating caddie training, learning how to play golf, then serving in the golf community as well. I was gratified by the fact people did notice that we were out trying to do what we could do.”

While there were no leadership and personal finance classes this year for the BCLA, Kelbel anticipates all aspects of the program will be full-go next year, assuming the coronavirus situation can be effectively dealt with.

“That’s why it was so important to forge ahead with even a shell of the program because I didn’t want those kids to find something else to do if they were worthy and capable and would be good representatives of the Caddie & Leadership program,” Kelbel said. “I didn’t want them going off in another direction and having to retrieve them for next year.”

And while things won’t crank up in a major way again until spring, the BCLA and the SCLA will help out on Monday at the Evans Cup, an Evans Scholarship fundraiser that will be held at The Broadmoor. After that, Kelbel aims to keep the momentum in the off-season by having the kids help out at his Fearless Golf non-profit — a spiritual and mental health outreach organization that’s geared toward at-risk teens and young adults. Also, he plans to have various presentations for the kids to attend — from the Civil Air Patrol, Junior ROTC, the Professional Golf Management Program at UCCS, etc.

Thirty-five kids participated in the BCLA volunteer work throughout the summer, and Kelbel thinks 28 of those will be back for 2021. Recruiting is under way as Kelbel is contacting school counselors, golf coaches, etc., to fill the vacated spots.

As for the Solich Caddie & Leadership Academy, things evolved somewhat as the summer went on. The leadership and financial literacy classes were virtual in June, but the caddies met in person outdoors in July to learn the Cowboy Ethics: Code of the West curriculum that’s featured at the SCLA.

The CGA staff administers both the SCLA and the BCLA and devotes considerable resources in nurturing and managing the programs. The association serves as the host non-profit for the BCLA. Ed Mate, the CGA’s longtime executive director, is — like the Soliches — a former caddie who attended CU on an Evans Scholarship.

This year at CommonGround, 37 SCLA caddies completed 1,215 loops. At Meridian, there were 436 loops done by 13 caddies. In Grand Junction — at Tiara Rado Golf Course and Lincoln Park Golf Course — six caddies did 158 loops, with a mixture of forecaddying and tradition loops.

All told, over nine summers, SCLA caddies have racked up roughly 12,000 loops. All time, 261 kids have participated in the program — 199 at CommonGround, 42 at Meridian and 20 in Grand Junction.

The normal pattern in the Denver metro area is for Solich caddies to spend two years at CommonGround or Meridian, then graduate to other programs around the area such as those at Cherry Hills Country Club, Denver Country Club, Lakewood Country Club, etc.

Over the years, 22 Solich Academy graduates have gone on to receive Evans Scholarships. Nine are applying this year in hopes of becoming Evans Scholars at CU in the fall of 2021, plus two from the BCLA.

Forebaugh, a sophomore at Heritage High School in Littleton, plans to apply for the scholarship in 2022.

“But regardless of the scholarship, I want to keep caddying through college,” he said. “It’s been a great help being in the Academy, and I’ve learned a lot of things.”

Here are the awards given out for the three Solich Caddie & Leadership Academy chapters for this year:

CADDIE LEADER OF THE YEAR

ROOKIE OF THE YEAR