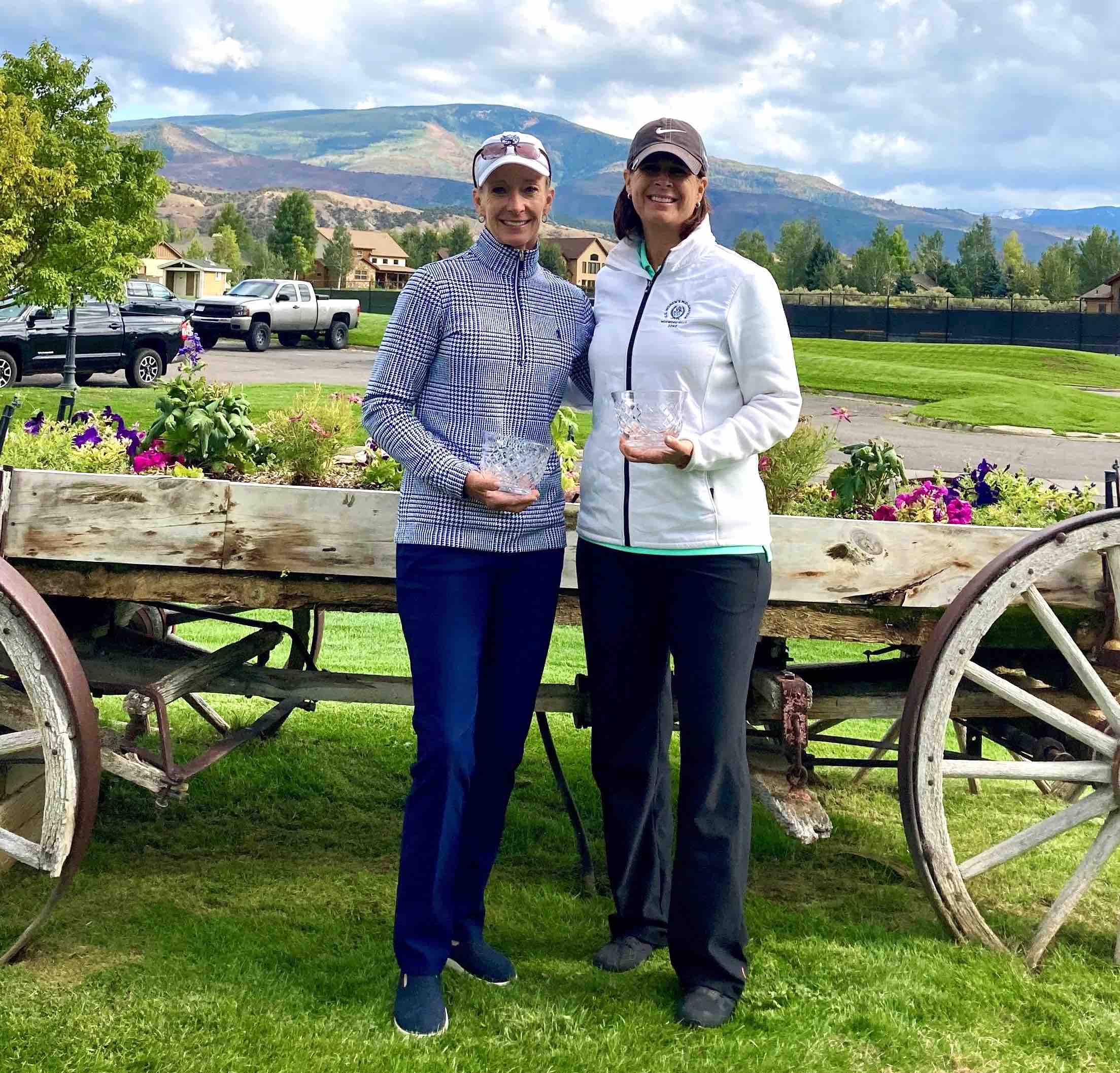 Austin, Moore win their 10th CGA title together as they rally to prevail in Women’s Dunham Chapman

Make it an even 10 for the diligent duo that is Janet Moore and Christie Austin.

Ten CGA/CWGA championship titles as partners in two-person team events, that is, for the Colorado Golf Hall of Famers from Cherry Hills Country Club.

On Wednesday, Moore and Austin broke through in the one two-person CGA women’s championship in which they hadn’t previously captured a title together. They prevailed by one stroke at the Dunham Chapman Championship at Gypsum Creek Golf Course in Gypsum, about halfway between Vail and Glenwood Springs.

The victory will go alongside the six CGA women’s team championships they’ve won together in the Mashie, and the three in the Brassie. And, mind you, they’ve won others with different partners, including the two Austin captured in the Dunham Chapman with Laurie Steenrod.

All told, including individual and team events, Moore has claimed 22 CGA/CWGA titles, and Austin 19. But 10 of those have come when they’ve teamed up, which is no small feat.

“I had to drag her kicking and screaming up here, but I got her here,” Austin said with a laugh. “She said, ‘My season is over.’ I said, ‘Not quite.’

“I think we know how to try to keep each other fired-up and motivated. When we’re swinging bad, the other one can sort of help work through it. I think we have a lot of confidence with each other.”

Said Moore of the pair’s success: “Christie is such a solid player that I know that I can depend on her. It makes it easier to swing the club when you know you have a really strong partner. That’s what helps me.”

On Wednesday — when it was cool but without precipitation, unlike for Tuesday’s first round, when it was downright cold, rainy and windy — Moore and Austin rallied from a stroke behind Meg Christensen and Terri Katz of The Club at Cordillera to win by one.

The Dunham Chapman features a format in which each golfer hits a tee shot, then plays her partner’s ball for the second shot. After that, a scoring ball is chosen, and that ball is played alternately into the hole.

Christensen and Katz made birdie on the final hole — their only birdie of the day, in fact — to post a 79, which gave them a 159 total. It was Christensen’s second straight runner-up showing in this event as she shared second place last year with Austin as her partner.

Susan Hartwell and Jean Miller of West Woods Golf Club took third place on Wednesday at 172 after closing with an 83.

After Christensen and Katz birdied No. 18, it forced Moore and Austin to make par to avoid a playoff, and Austin did indeed convert, sinking a 4-foot putt.

“We had missed a couple of short putts before that, so that was really a clutch putt,” Moore said.

Moore and Austin parred the first eight holes of the day, the last three, and two in between to go along with five bogeys in the second round. One of the pars that kept their early streak going came on No. 6, where Austin drained a 12-foot putt.

“We had moments of greatness, but we’re both getting older and this cold weather makes it a little harder for us to swing it,” said Austin, 63. Moore is 56. “It was a challenge.”

Moore, who was competing in her first Dunham Chapman, noted how unique the conditions proved to be this week when also factoring in the practice round.

“Our practice round was smoke (due to the fires),” she said. “So we went smoke-filled skies to freezing-cold sleet, wind and rain, then today was nice. It was so hard for us yesterday. If I got the ball airborne I was thrilled. It was really cold.”

As for Austin, her 19 CGA/CWGA championships include 16 in two-person team events: six each in the Brassie and Mashie, three in the Chapman and one in the Mixed. Individually, Austin has been victorious twice in the CGA Women’s Senior Stroke Play and once in the Senior Match Play.

The career record for CGA women’s/CWGA titles is 25, shared by Colorado Golf Hall of Famers Carol Flenniken and Kim Eaton.

In all this week, four flights competed at Gypsum Creek — championship and first through third.

For all the scores from the Dunham Chapman, CLICK HERE.