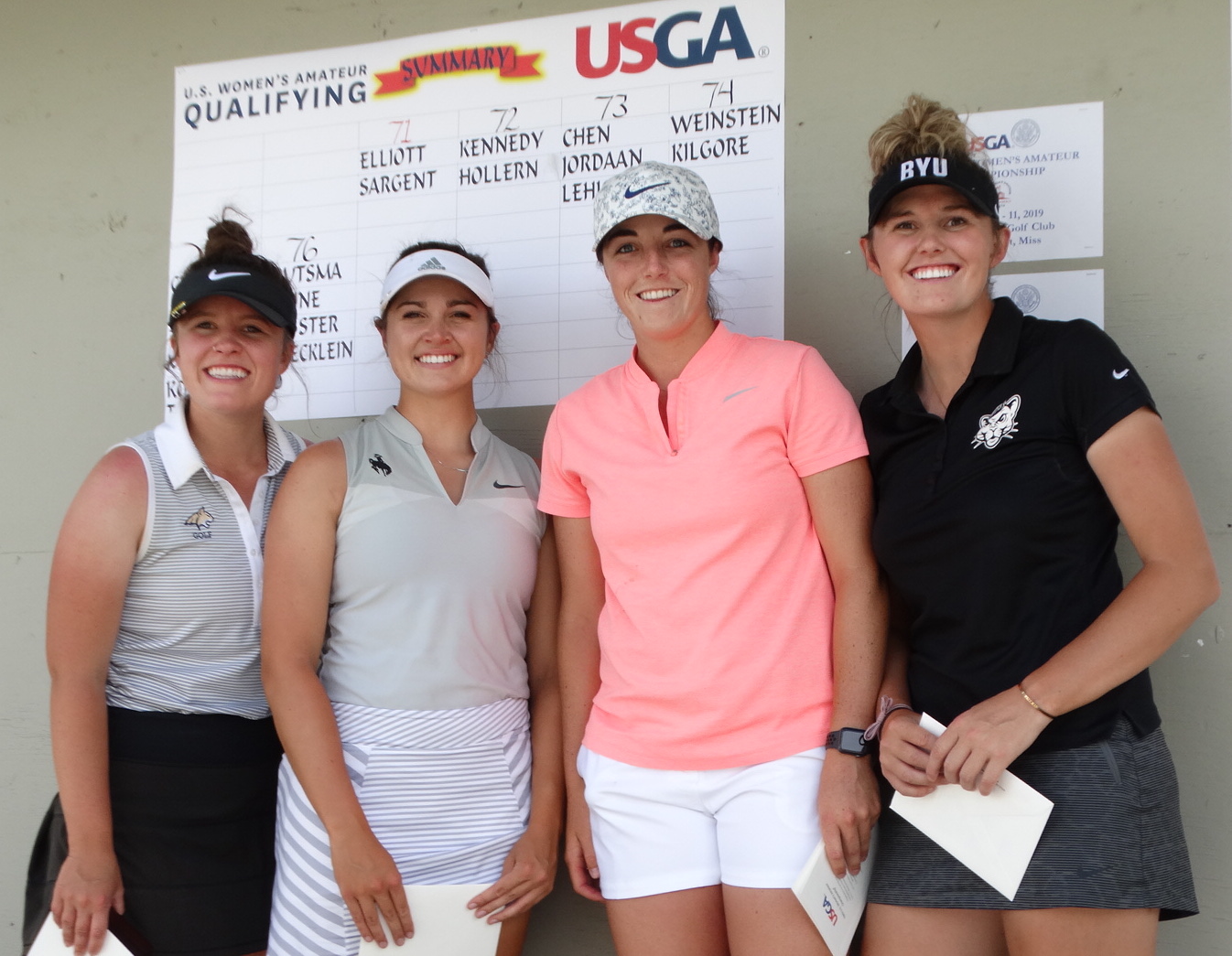 There are all sorts of ways of earning a spot in the U.S. Women’s Amateur, and a variety of them played out on Wednesday in qualifying at CommonGround Golf Course in Aurora.

— Delaney Elliott of Superior made the second hole-in-one of her life — from 168 yards with a 6-iron on No. 12 — en route to a 1-under-par 71 to share medalist honors and land her first trip to this national championship.

— Erin Sargent of Longmont matched that 71 to earn her second trip to the U.S. Women’s Am — but first since 2015, when she qualified as a 17-year-old.

— Anna Kennedy of Parker played her last four holes in 2 under par and shot an even-par 72 to secure a spot in a USGA championship for the first time.

— Katherine Hollern of Sedalia, who didn’t play golf in high school or college and said her scoring average has improved by 12 strokes over the last year, also carded a 72 to land a spot in her first USGA tournament.

— And Lauren Lehigh of Loveland earned the rebound of the day award. After bogeying two of her last three holes of regulation to be forced into a playoff for the final U.S. Women’s Amateur berth, Lehigh drained a 12-foot birdie putt on the third extra hole, with the prize being her first trip to compete in a USGA national championship.

The U.S. Women’s Amateur where the five Coloradans are headed will be held Aug. 5-11 at Old Waverly Golf Club in West Point, Miss. (The top four qualifiers are pictured above, from left: Elliott, Sargent, Hollern and Kennedy.)

A total of 55 players were signed up for Wednesday’s qualifying event at CommonGround, which will serve as the second stroke-play course for the U.S. Mid-Amateur that Colorado Golf Club will host in September.

All of Wednesday’s qualifiers are between 18 and 22 years of age, with Lehigh being the youngest as she’ll begin her college golf career at the University of New Mexico in the fall.

“I’m so excited,” said Lehigh, the 2018 Junior Golf Alliance of Colorado Girls Player of the Year, who has won both the 5A girls state high school meet and the Colorado Junior PGA Championship this year. “This is the first USGA event I’ve qualified for, so this is a big deal. I had mentioned something to my dad after playing in the (U.S.) Girls’ Junior qualifier, saying, ‘I haven’t ever qualified for a USGA event.’ This is the first one I’ve played well in the qualifier and felt good about it. So to actually make it is amazing.”

Though Lehigh doesn’t play the course much at CommonGround, she’s been a member of the Hale Irwin Player Program at the facility for four years, and her coach, Colorado Golf Hall of Famer Lauren Howe, teaches at CommonGround.

On Wednesday, making the 12-foot birdie putt in the playoff — which was good enough to defeat Caroline Jordaan of Greenwood Village — was a welcome sight for Lehigh.

Elliott, a senior-to-be on the Montana State golf team, made some putts on Wedneday — specifically from 30, 15, 12 and 4 feet on the front nine — but it was what she did on No. 12 that was really noteworthy. Though she didn’t get to see the ball go into the hole as the cup was situated in a swale, her 168-yard hole-in-one certainly worked wonders for her scorecard.

“I hit a pretty good shot,” she said. “I thought it was going to be good, but you can’t really see the hole. I just heard the cheers. It was fun.”

Indeed, the ace left Elliott 4 under par through 12 holes. And even though she bogeyed three of her next four holes, she still tied for medalist honors.

“I’m super excited,” the 21-year-old said. “I’ve been close for so long (in U.S. Women’s Am qualifying) and have been in playoffs twice. I’ve always wanted to go. I’m probably going to be done golfing after senior year, at least competitively. So it’s pretty cool to have one last go-around.”

Elliott’s only previous USGA championship was the USGA State Team in 2015.

As for Sargent, returning to the U.S. Women’s Amateur for the first time in four years is a welcome opportunity.

“It’s great,” said Sargent, a senior-to-be on the University of Wyoming golf team who has finished second in the last three CGA Women’s Stroke Plays. “I’ve always wanted to go back. It’s always been in the back of my mind. It’s a great opportunity to see how much my game has changed since then. I’ve drastically changed as a player — mentally, phisically, just about everything. I’ll be really excited to see how I hold up on the national level.

“I definitely remember going out there (for the 2015 U.S. Women’s Am) and feeling a little intimidated. But it was such a great experience. I got to see this is where I want to be and this is where I want to go with my game. (This year) I’ll be prepared to go back again. It will be a better experience for my game now — more of a test for my game now — because I feel like I’ve matured so much since then.”

Kennedy, who will be a senior on the BYU golf team next season, landed her U.S. Women’s Am spot thanks to birdies on her 15th and 18th holes Wednesday, the latter via a 9-foot putt that kept her out of the playoff.

“I’d been playing pretty good all day and had given myself a lot of opportunities, which I was happy with,” the 22-year-old said. “I was like, ‘OK, stay patient. Hit good shots, roll good putts.’ On the last one on 18, I was like, ‘OK, you’ve got to make birdie here.’ I hit a 40-yard spinner in to 9 feet and canned the putt so I was very happy.'”

Kennedy had chipped in for birdie on her first hole from about 45 feet, but the 18th-hole birdie was the longest putt she sank all day. It left her giving high-fives and smiling broadly.

“I’m so excited,” said Kennedy, winner of one individual title during her college career. “I’ve always wanted to qualify for this tournament. I started golf pretty late so I didn’t know the significance of it until the last couple of years. I play for BYU and I’ve had several teammates that have made it and rave about the tournament. So it means a lot.”

Hollern might be the most surprising story among Wednesday’s qualifiers given how much she’s improved over the last year and her relative dearth of tournament experience.

The 22-year-old played lacrosse instead of golf at Valor Christian, and after a year at a college in Virginia, she transferred to the University of Denver. She didn’t play golf there either but did graduate from DU.

“With the little golf history I have, I was super proud of this round” of 72, she said. “I think I’ve shaved 12 strokes off my game in the last year. Last March I shot 90 in a tournament, and today I shot par.

Going into last year, “I’d never put myself in a golf situation with this kind of pressure. When I stepped up on the first tee, I wasn’t close to ready for the emotions I felt,” she said. “I felt a lot more prepared (today). I spent the year down in Florida playing on a mini-tour, and playing with a lot of ex-pros and people who have lost their (tour) card taught me a lot. It helped me learn a lot about composure. For the most part today I felt pretty calm, which was awesome.”

The result on Wednesday for Hollern was a three-birdie, three-bogey round — and a ticket to the U.S. Women’s Amateur.

“This is an abolutely unreal experience,” she said. “I’m blown away.”

Jordaan, the DU-bound player who won the 3A state high school title in May, will be the first alternate out of the CommonGround qualifying site after shooting her 73 and parring all three holes of the playoff. Kaylee Chen of Greenwood Village, who last week qualified in Colorado for the U.S. Girls’ Junior, will be the second alternate after making a bogey on the first playoff hole on Wednesday.