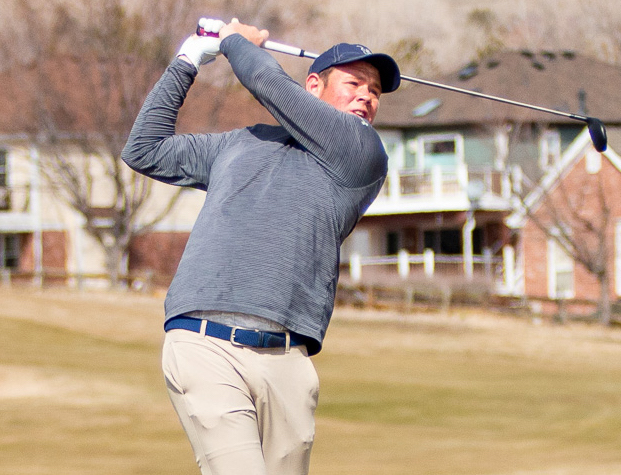 George Markham birdied his final three holes in regulation, then two of the four in a playoff on Monday. Photo: Colorado School of Mines

Former Colorado School of Mines golfer George Markham will play in his first PGA Tour event after Monday qualifying in Boulder City, Nev., for the Shriners Hospitals for Children Open, which begins Thursday in Las Vegas.

Markham, who wrapped up his Mines golf career last year when he was the Rocky Mountain Athletic Conference Golfer of the Year, landed the fourth and final spot in the Monday qualifying tournament after also successfully negotiating the pre-qualifying event last week.

He fired an 8-under-par 64 on Monday to tie for fourth place out of 75 players — not counting withdrawals. That left Markham in a four-man playoff for the final qualifying position.

In sudden death, Markham went par-birdie-par, then drained a 6-foot birdie putt on the fourth extra hole to advance.

In regulation, the left-hander birdied his final three holes to land a spot in the playoff. In all, he made eight birdies in his bogey-free 64.

Also advancing to the Shriners Hospitals for Children Open field were Matt Wilson, Spencer Levin and Michael Gligic, who all shot 63.

In last Thursday’s pre-qualifying tournament, Markham eagled his last hole — one of his two eagles on the back nine — to shoot 66 and advance to the Monday qualifier.

Other players with strong Colorado connections in the field for the Shriners Hospitals for Children Open  are Wyndham Clark, Mark Hubbard, Martin Laird and Kevin Stadler.

In other local Monday qualifying news, former University of Denver golfer Chris Gilman was one of eight players who qualified for the Korn Ferry Tour’s Orange County National Championship in Winter Garden, Fla. Gilman birdied his final three holes and carded an 8-under-par 64 and was one of those who prevailed in a 6-for-4 playoff on Monday.