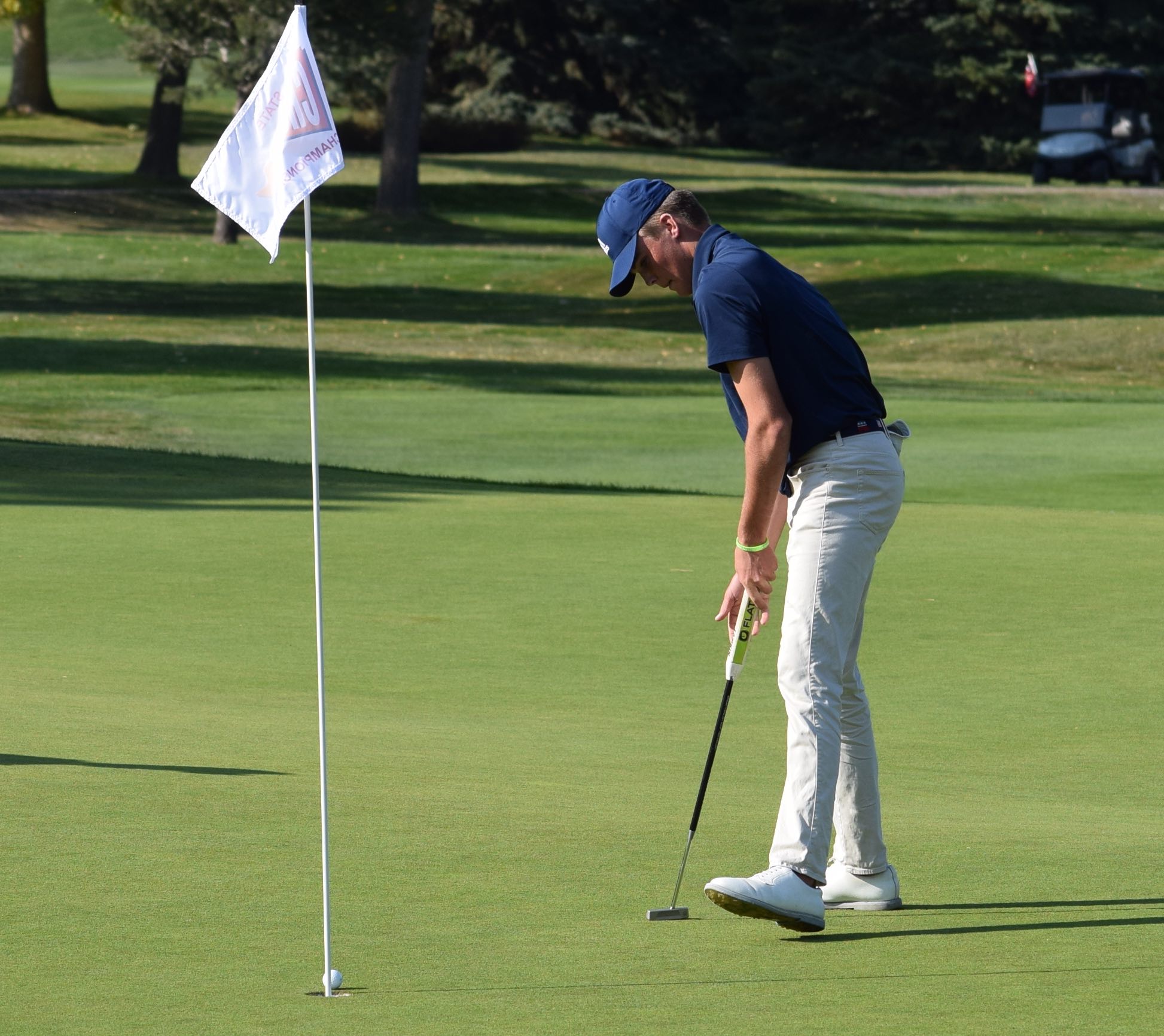 Lucas Schulte of Valor Christian walks in his 5A tournament-winning eagle putt at No. 18 at Rolling Hills on Tuesday.

Schulte’s final-hole eagle gives senior 5A individual title and his Valor Christian squad the team championship; Montrose’s Jennings and Cheyenne Mountain prevail in 4A; Aspen’s Pevny and Colorado Academy rule in 3A

As far as ways to end a high school golf career go, it would be difficult to top what Valor Christian senior Lucas Schulte did on Tuesday at The Club at Rolling Hills in Golden.

In his final official shot as a high school player, Schulte eagled the 18th hole …

To win the 5A boys state high school individual title …

And put Valor Christian over the top for the team championship as well.

After three-putting for bogey on the 17th hole, leaving him one out of the lead, Schulte smacked a 310-yard drive on the par-5, dogleg-left 18th hole at Rolling Hills. Then he hit an 8-iron from 176 yards that ended up 6 feet under the hole. And he calmly rolled in that eagle putt that was an all-around winner.

“It was something special,” the 18-year-old from Lone Tree said about 20 minutes later. “It’s a good way to finish.

“I’m not really a decorated player. I started playing golf when I was a freshman and was averaging about 90. I’ve just been trying to improve every year. But it’s always been a dream of mine to win state. Honestly, I’ve yet to realize I’m a state champion, but it’s something special to achieve a dream like that.”

In other highlights from the three boys state high school tournaments that concluded on Tuesday:

— Senior Jordan Jennings ran Montose’s streak of consecutive 4A state individual champions to three after former teammate Micah Stangebye had prevailed in 2018 and ’19. The Colorado State University-bound Jennings shot the lowest round of any of the three state tournaments this week — a 3-under-par 68 on Tuesday at the Country Club of Colorado in Colorado Springs — to prevail by four. However, Montrose’s run of team titles ended at three as it placed third, 13 strokes behind champion Cheyenne Mountain.

— Aspen junior Nic Pevny claimed the 3A individual championship a year after placing fourth at state. He backed up his first-round 69 with an even-par 71 to post a three-stroke victory.

— While Valor Christian notched its sixth team title in boys golf — and first in 5A — Cheyenne Mountain, the home favorite in the 4A tournament in Colorado Springs, notched team championship No. 2 and its first since 2004.

— In 3A at Dos Rios Golf Club in Gunnison, Colorado Academy broke through for its first state title in boys golf, winning by five over St. Mary’s. First-round leader Kent Denver had an opportunity to become the first Colorado school to record 10 state team championships in boys golf, but a rough finish left them in third place, six behind Colorado Academy.

Kent senior Jeffrey Zhou was 1 under par for the round through 15 holes, but bogeyed 16 and 17, then made a 10 on the par-4 18th hole, where he hit two shots out of bounds. Kent had needed a par from Zhou on No. 18 to force a playoff with Colorado Academy. Zhou finished eighth individually at 8-over-par 150.

Here’s a rundown from each of the state tournaments:

— 5A at The Club at Rolling Hills in Golden: While Schulte hadn’t won a high school individual title before in 2020, he certainly came through on Tuesday. Despite playing his first five holes of the final round in 3 over par, he went 2 under the rest of the way, making three birdies in addition to the 18th-hole eagle. His 1-over-par 72 gave him a winning total of 4-over-par 146.

The only two players who shot sub-par rounds in the two days at Rolling Hills tied for second place, one stroke back of Schulte. Trey Kirschner of Ralston Valley fired a 2-under 69 on Tuesday and Ryan Occhionero of Regis Jesuit a 70. Both players birdied the 18th hole.

The first-round co-leaders, Graham Dzengelewski of Arapahoe and Wes Erling of Pine Creek, tied for fourth place at 148 with Jeff Nelson of Prairie View. Dzengelewski led for almost the entire tournament, but a bogey on 16 and a double bogey on 17 before making birdie on 18 proved costly as he posted a 4-over 39 on the back nine Tuesday.

“I kind of had a feeling this summer that I was going to win something big,” he said. “And all my buddies and coaches were telling me that. I guess it came down to the last tournament of the year.”

“To keep that tradition going is really special,” he said.

Said Byler of Schulte’s highlight-reel finish on No. 18: “As a senior, you dream about moments like that.”

And to sweep the team and individual championships is a cherry on the cake for the Valor squad. With a 452 total, VC won by two, with Arapahoe finishing runner-up for the second straight year, having fallen three short in 2019. Regis Jesuit (457) and Ralston Valley (458) were also in contention.

“I’m honestly just shocked because we got fourth in our league (Jeffco),” Schulte said. “To come out and win state is unreal. My coach knew something special would happen (this week), whether it was team or individual.”

Mullen finished second, five strokes back of Cheyenne Mountain, while Montrose was third, 13 out of the top spot.

In the individual competition, Jennings trailed Mullen’s Mario Dino by two going into the final round, but he caught Dino after making three consecutive birdies on holes 2 through 4. However, the tournament was decided on the final eight holes as Jennings went 2 under, while Dino went 3 over.

Jennings’ 3-under 68 left him with a 2-over-par 144 total. Dino placed second at 148 and Mullen teammate Rhett Johnson was third at 150. Jack Mitchell of Evergreen and Jake Chesler of Frederick tied for fourth at 151.

— 3A at Dos Rios Golf Club in Gunnison: Pevny started round 2 with two straight birdies, and added two more on Tuesday to go with four bogeys. His even-par 71 put him at 2-under-par 140 overall, making him the only player in any of the three state tournaments to finish 36 holes under par.

Montezuma-Cortez sophomore Thayer Plewe finished runner-up at 143 after a 73 on Tuesday. He birdied the first and third holes in round 2, but wouldn’t make another, and he played his final 13 holes in 4 over par.

Also at the 3A tournament, Jack McLucas from Jefferson Academy scored a hole-in-one, acing the 177-yard 12th hole on Tuesday en route to a second-round 86.

Class 3A At Par-71 Dos Rios Golf Club in Gunnison

For all the scores from each state tournament, CLICK HERE.