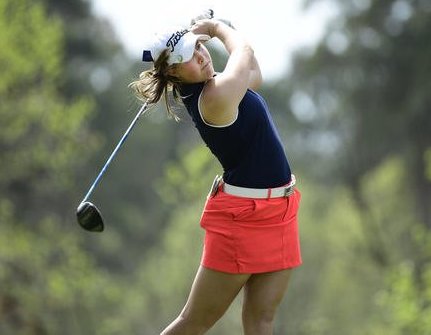 For a golfer who originally wasn’t planning to accept an invitation to the inaugural Augusta National Women’s Amateur, Jennifer Kupcho is certainly taking advantage of her change of plans.

The Westminster resident, the top-ranked women’s amateur in the world, started the tournament with 31 straight bogey-free holes before suffering a blemish on her 14th on Thursday, and will own a one-stroke lead going into Saturday’s final round at Augusta National Golf Club in Georgia.

(In an unusual twist for major tournament golf, Friday will serve as a practice round for all 72 competitors in the ANWA — even those who missed the 36-hole cut — then the top 30 golfers will play Augusta National on Saturday, the weekend before the Masters. NBC will televise Saturday’s final round from 10 a.m. to 1 p.m. (MT).)

Kupcho, the 2018 NCAA Division I individual champion from Wake Forest, didn’t make anything worse than a par in the first 31 holes she played at Champions Retreat Golf Club in Evans, Ga., before carding a bogey on the par-4 fifth, her 14th of the day. The 21-year-old, who has her dad Mike caddying for her this week, also bogeyed her 17th hole and backed up her first-round 68 with a 1-under-par 71 on Thursday. She sits at 5-under 139 overall.

Kupcho, a three-time CGA Women’s Player of the Year who will begin her LPGA Tour career later this spring, made three birdies and two bogeys in round 2 after hitting all 18 greens in regulation in round 1.

The results so far this week certainly aren’t surprising given that Kupcho has posted individual victories at the last two college tournaments in which she competed, and finished second in the one before that.

Her closest pursuer, Maria Fassi of Mexico, a University of Arkansas senior, is certainly no stranger to Kupcho. Fassi has qualified in Colorado for multiple USGA championships, and her and Kupcho often found themselves near the top of those scoreboards.

Fassi, the 2018 Annika Award winner as the player of the year in women’s college golf in 2017-18, birdied two of her last three holes on Thursday to fire a 2-under-par 70 for a 140 total. Fassi had an up-and-down round, with an eagle, five birdies and five bogeys.

Like Kupcho, Fassi will be an LPGA rookie after wrapping up her college career next month.

Sharing third place, at 3-under 141, are University of Florida golfer Sierra Brooks, a teammate of Kupcho’s at Wake Forest before transferring; the University of Texas’ Kaitlyn Papp; and Thailand’s Pimnipa Panthong, a Kent State golfer.

Papp carded a five-birdie 69 on Thursday, while Brooks and Panthong had 70s, Brooks playing her final three holes in 2 over par.

Now it’s on to Augusta National, site of next week’s Masters, a course Kupcho played during her sophomore year at Wake Forest. Kupcho and Fassi will tee off at 8:20 a.m. (MT) on Saturday.

This has been a big week for Kupcho. On Monday, she was announced as one of the first two recipients (along with Dale Douglass) of the Hale Irwin Medal, which recognizes outstanding Colorado golfers who exhibit competitiveness, resiliency and a proven record of winning. And on Wednesday night, Kupcho was honored as the 2018 Amateur Athlete of the Year — regardless of sport or gender — by the Colorado Sports Hall of Fame.