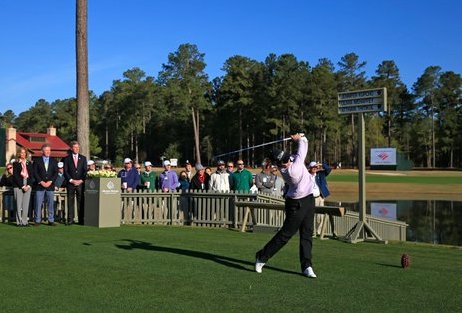 Westminster resident Jennifer Kupcho had the honor of hitting the opening tee shot Wednesday in the inaugural Augusta National Women’s Amateur in Georgia.

On hand for the occasion (pictured in a Golf Digest photo), among others, were Augusta National Golf Club chairman Fred Ridley and former USGA president Diana Murphy.

“I really wasn’t nervous until I got to the first tee,” Kupcho said. “There were a lot of people there.”

And while Kupcho will be able to tell people for years to come about Wednesday’s first, she seems determined to make this week memorable for reasons beyond that.

The Wake Forest senior, the 2018 women’s NCAA Division I individual champion, not only teed off first on Wednesday, but she concluded round 1 of the 54-hole event at the top of the leaderboard.

Kupcho, the No. 1-ranked women’s amateur in the world, fired a bogey-free 4-under-par 68 and shares the lead with 16-year-old Zoe Campos of Valencia, Calif. Kupcho, the three-time CWGA Player of the Year who likely will begin her LPGA Tour career in less than two months, birdied three of her last five holes on Wednesday to set the standard at Champions Retreat Golf Club in Evans, Ga., where the first two rounds are being held.

A winner of two straight college tournaments, Kupcho hit every green in regulation on Wednesday.

Kaleigh Telfair of South Africa trails Kupcho and Campos by one stroke. Among the players tied for fourth place at 70 after round 1 is Maria Fassi of Mexico, who has qualified in Colorado for multiple USGA championships.

After a practice round at Augusta National Golf Club on Friday for all of the ANWA competitors, the top 30 players after 36 holes will vie in Saturday’s final round at the site of next week’s Masters.

Meanwhile, Kupcho will be honored — in absentia — tonight (April 3) as the Colorado Sports Hall of Fame’s Amateur Athlete of the Year for 2018.