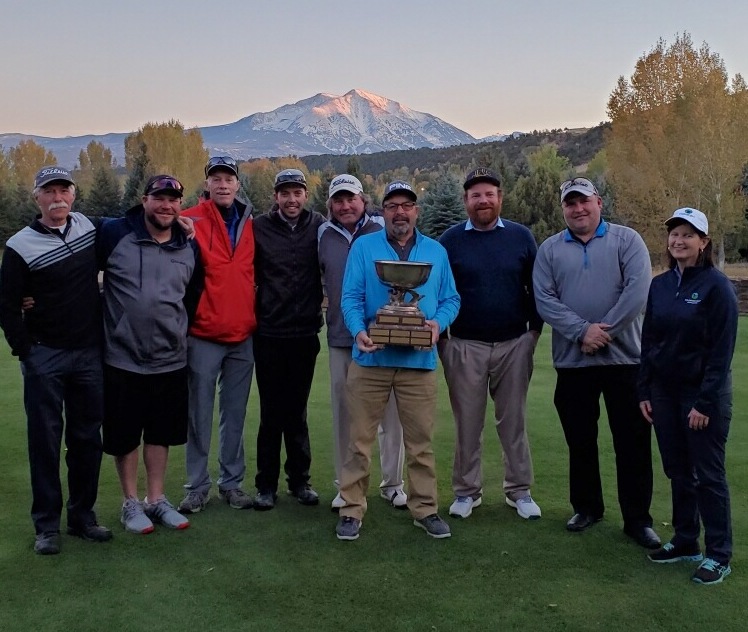 The team from Rifle Creek Golf Course had been in the presence of the CGA Team Interclub trophy three times previously at the title match of the season-long event, only to go home empty-handed as the runner-up.

But trip No. 4 to the finals proved to be the charm on Friday as Rifle Creek defeated fellow Western Slope team Battlement Mesa Golf Club 17-7 for the championship on a brisk day at Aspen Glen Club in Carbondale.

“It’s awesome,” Rifle Creek captain Mark Sours said. “This was our fourth trip to the finals and our first win, so it’s been a long time coming. For us, it’s a lot of work because we have to travel a long ways when we get into the playoffs — going to Denver (to play opponents there). So it really feels good; it really does.”

The victory felt especially satisfying considering that Rifle Creek came ever so close to a title last year, but lost in the final 13-11 to The Broadmoor.

“We were really disappointed last year,” Sours said. “I think it came down to one putt that we lipped out on the last hole that lost it for us, so that was kind of tough. But basically we’ve had the same core group of guys playing for (the 10 years) the Interclub has been going on. So it’s a great thing for all these guys. To finally get it done was really great.

“We’ve had a bunch of our members text us wondering how we did. It’s a big thing for the club.”

(The champions from Rifle Creek are pictured above at Aspen Glen with CGA board member Mary Woulfe, a resident of Aspen.)

The victory capped a 7-0 record this season for Rifle Creek in the Team Interclub, which typically begins in late spring. Two of those RC wins came over Battlement Creek — by an 18-6 margin in the regular season and 17-7 in Friday’s final. Rifle Creek also avenged last year’s finals loss, beating The Broadmoor in the semifinals 19-5.

For Battlement Mesa, there was no reason to hang heads considering the way Rifle Creek has performed all season.

“Obviously we’d like to have come out on the other end, but it’s still a great event and we’ll just say congratulations to Rifle Creek,” said Doug Choate, the captain for Battlement Mesa, which went 5-2 on the season. “They’ve played very well. I think we’ve given them their closest matches of the year. They’ve played really well all season — here and on the Eastern Slope.”

Indeed, Rifle Creek has been dominant all season, with Friday’s 10-point victory margin its smallest of the year. Cumulatively, Rifle Creek outscored its opponents 116-28 in 2019.

“I think we travel well,” Sours said. “We play on other people’s courses really well. And (when RC hosts matches) our course is pretty tough. It’s not long but it’s pretty tough, so I think people for who haven’t played there, it’s hard to come to Rifle and play.”

Friday marked the first CGA Team Interclub final that featured two teams from the Western Slope. This was Battlement Mesa’s third finals, and it won the title in 2016. The two courses are just 23 miles apart.

Interestingly, several players who competed on Friday are members of the men’s clubs at both Rifle Creek and Battlement Mesa, including Sours.

“Doug (Choate), the captain of the other team, my wife and his wife and some other couples, we played St. Andrews and went to Scotland and Ireland together this year,” Sours said. “So we know all these guys really well. I’m in not only Rifle’s men’s club but Battlement’s men’s club too, as some of the other guys are.”

Though Choate and Battlement Mesa came up short on Friday, they enjoyed the fact that two Western Slope teams squared off for the title.

“Everybody that’s involved with it is very proud that two Western Slope teams were able to get to the final,” he said. “It’s good guys and good camaraderie. And it was really nice to be able to play the final over in our area. Aspen Glen is a fantastic venue and a great host. And we travel a lot as it is so to not travel (far) for the final was really great.”

In the Team Interclub, golfers play singles and four-ball matches concurrently. And four players — all from Rifle Creek — won both of their matches on Friday: Jeb Savage, Tod Smith, Sours and Clint Hostettler. Those who won one match and tied one were RC’s Michael Smith and Battlement Mesa’s Ken Seidel and Choate.

The CGA Team Interclub stands apart among CGA championships. Every other championship on the schedule is contested over the course of one to four days. The Team Interclub, on the other hand, typically lasts about five months, with a regular-season round-robin of geographically-linked groups of teams going from late spring through July, then a 16-team single-elimination playoff being held from August to October.

This year’s original CGA Team Interclub field featured 28 teams. The record number of team entrants for the event was 64 in 2013.

At Aspen Glen Club in Carbondale