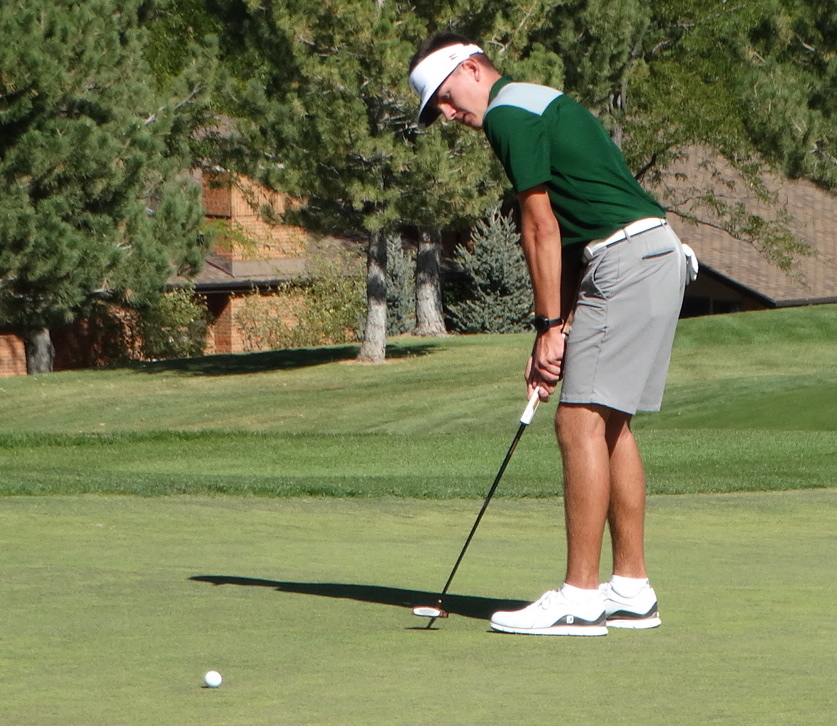 Cherry Hills Country Club is never a pushover, whether it’s hosting a major championship for the best players in the world or for the Junior Golf Alliance of Colorado.

Fifty-eight of Colorado’s best junior players teed it up on Saturday for the first round of the JGAC Tour Championship, and a grand total of two posted sub-par rounds.

Gavin Hagstrom of Fort Collins, a senior at Fossil Ridge High School, grabbed the lead in the boys division with a 4-under-par 68, while Parker Paxton of Riverton, Wyo., checked in at 2-under 70.

On the girls side, Cherry Hills’ own Charlotte Hillary set the standard in round 1 with an even-par 72, which gave the two-time champion in this event a five-stroke advantage.

Hagstrom (pictured above), the 17-year-old who finished third in the Class 5A state high school tournament on Tuesday, racked up seven birdies and three bogeys in round 1 of the 36-hole event. Paxton chalked up three birdies and a bogey for his 70.

Meanwhile, in the girls competition, Hillary opened up her five-stroke advantage after a three-birdie, three-bogey performance on Saturday. The Northwestern University-bound golfer from Kent Denver has won the JGAC Tour Championship both time she’s entered the event (2016 and ’18).

Sofia Choi of Littleton, 15, and Abigail Aeschleman of Highlands Ranch, 14, share second place at 77. Choi had the highlight of the day as she made the first hole-in-one of her life, on the 160-yard 15th hole with a 6-iron. She also had a birdie on No. 5.

Next best, in fourth place, was Colorado Junior Amateur champion Kaylee Chen of Greenwood Village, who carded a 78.

Sunday’s last round of the final major championship of the JGAC season will be followed by a junior awards banquet.

For scores from the JGAC Tour Championship, click on the following: BOYS, GIRLS.