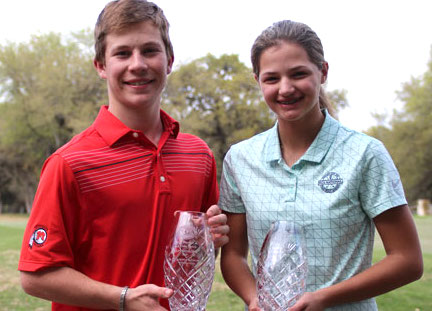 Micah Stangebye of Montrose ventured down to Texas and will return home with an American Junior Golf Association title.

Stangebye, the reigning Class 4A state high school individual champion, scored a one-stroke victory on Sunday in the AJGA Preview at Fair Oaks Ranch in Texas.

Competing in a field of 63 in the boys tournament, Stangebye posted rounds of 72-69 for a 3-under-par 141 total. He made six birdies and three bogeys in the final round to edge Aram Yenidjeian of Argentina, who also closed with a 69.

Lexi Schulman of Vernon Hills, Ill. won the girls tournament by three strokes. She and Stangebye are pictured above in an AJGA photo.

Elsewhere in AJGA Action for Coloradans: Charlotte Hillary of Cherry Hills Village placed sixth in the Sergio and Angela Garcia Foundation Junior Championship in Austin, Texas. She shot rounds of 78-72-74 for an 8-over-par 224 total. … And Maxwell Lange of Golden tied for fifth in the AJGA Preview at River Ridge for competitors 12-15. Lange went 74-75 for a 5-over-par 149 tally.